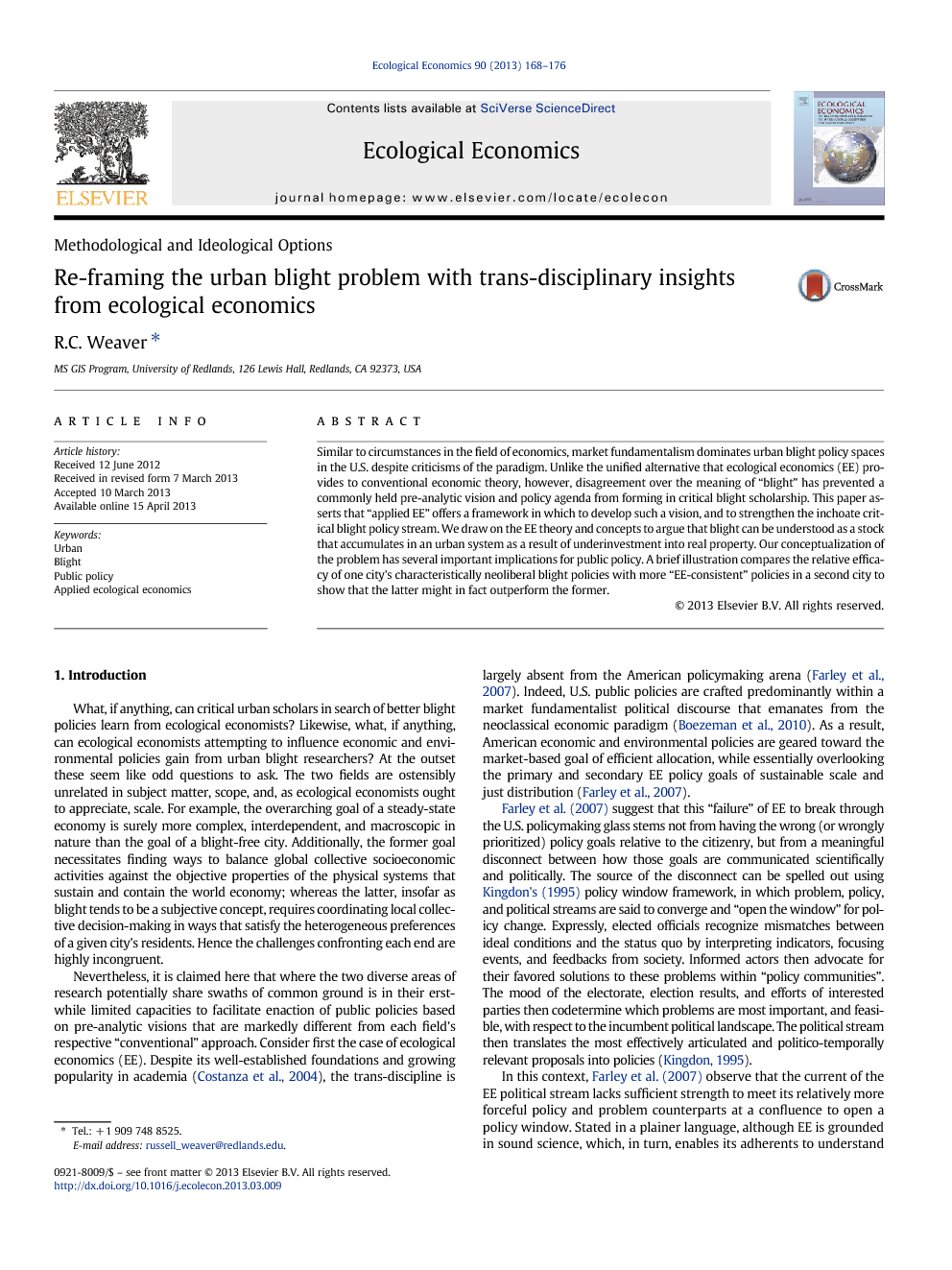 Similar to circumstances in the field of economics, market fundamentalism dominates urban blight policy spaces in the U.S. despite criticisms of the paradigm. Unlike the unified alternative that ecological economics (EE) provides to conventional economic theory, however, disagreement over the meaning of “blight” has prevented a commonly held pre-analytic vision and policy agenda from forming in critical blight scholarship. This paper asserts that “applied EE” offers a framework in which to develop such a vision, and to strengthen the inchoate critical blight policy stream. We draw on the EE theory and concepts to argue that blight can be understood as a stock that accumulates in an urban system as a result of underinvestment into real property. Our conceptualization of the problem has several important implications for public policy. A brief illustration compares the relative efficacy of one city's characteristically neoliberal blight policies with more “EE-consistent” policies in a second city to show that the latter might in fact outperform the former.

In their closing remarks to a pivotal call for ecological economists to become more skilled “policy entrepreneurs”, Farley et al. (2007) observe that “ecological economics…[is] too important to remain cloistered in academia”. To this, the preceding exercises suggest that the logic and principles of EE likely stretch into more spaces than previously thought, including real world urban policymaking arenas far from the ivory tower. Returning to the questions posed in the opening sentences, it has been shown that the problem and policy streams of EE are sturdy enough to support a branch of “applied EE” that transcends the trans-discipline's pursuit of a steady state economy. As an example, this research applies EE to the outwardly unrelated field of urban blight. The application is convenient for at least two reasons. First, as in economics, market fundamentalism dominates urban blight policy spaces in the U.S. despite many academic criticisms of the paradigm (Weber, 2002). Second, unlike the unified contrast that EE presents to market fundamentalism in the broader field of economics, disagreement over the nature of blight has prevented a commonly held pre-analytic vision and shared policy agenda from forming in critical blight scholarship (Gordon, 2008). This paper demonstrates that applied EE offers a sound framework in which to develop such a shared vision to strengthen the inchoate critical blight policy stream. Much the same, we argue that applied EE can become a laboratory for studying related policy issues in the urban social sciences. With the support of its applied branch, the larger EE political stream can slowly begin to erode away erstwhile embankments and meander into mainstream policymaking discourses.