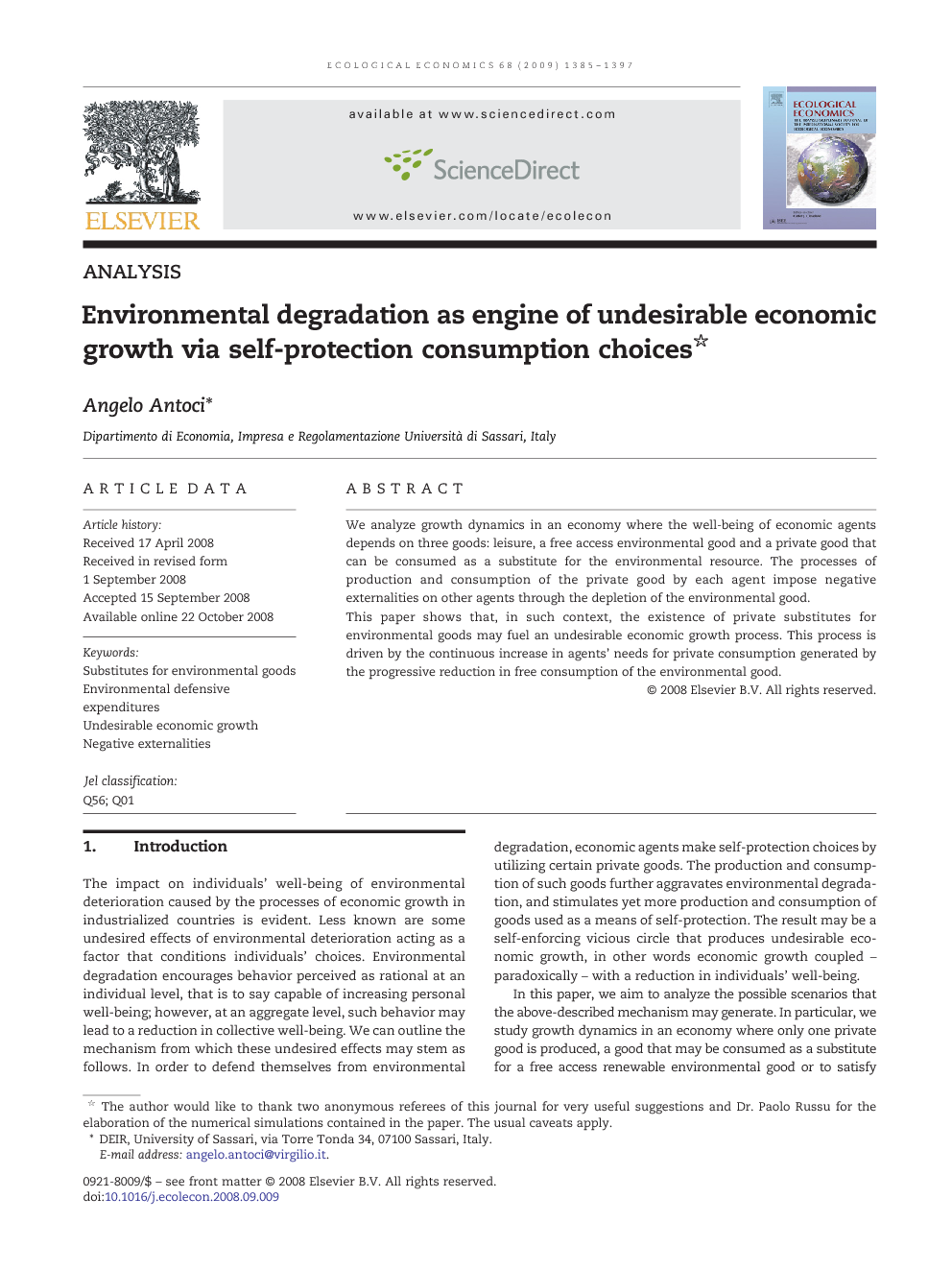 The general prediction of the model is that the higher the environmental impact γ and the lower the endowment E̅ of the environmental good are, the higher the economy's technical progress and consumption level will be. An exogenous reduction in E̅ or an exogenous increase in γ may generate an increase of the aggregate product and of the level of K. Economic growth is fueled by the increase in the work motivation of economic agents, as a consequence of the gradual deterioration of the environmental resource. Such deterioration induces agents to modify their consumption patterns, and concentrate more and more on the consumption of private and expensive goods, rather than free access environmental goods. The analysis of the model has shown that the outcome of this economic growth mechanism may be undesirable, and call for coordination by the Public Administration. What guidelines should the Public Administration follow in planning environmental policies? Public administrators should ask themselves the following question: how many free access leisure opportunities are available to individuals? The question becomes particularly relevant when we consider the issue of managing large urban centers. The negative environmental effects of interaction between individuals are particularly evident in environments with high human density and high production density such as urban areas, the very places in which the majority of self-protection choices are made. Cities have the advantage of offering a great variety of leisure opportunities; nevertheless, they also have the disadvantage that almost nothing on offer is free of charge. This damages weaker categories such as the elderly, children, and low-income families. Traffic bans at weekends designed to reduce urban pollution are one example of an extremely effective public measure that induces citizens to change their consumption patterns. By reducing atmospheric and noise pollution, such measures considerably increase the supply of free access places available to citizens for their leisure time and hence help to reduce undesired self-protection consumption. Another important area of intervention is management of coastal areas, the objective of which should be not only a reduction in the degradation of ‘nearby’ bathing areas but also a reduction in the cost of access to such areas. In fact, it is appropriate not only to protect these areas, but also to guarantee free access to beaches made private by the granting of concessions, in order to avoid the effective transformation of free access public goods into costly private goods. Generally, it would be desirable for the Public Administration to identify and classify all activities which may give rise to self-protection choices, with reference to the type of subject involved (individuals, firms, Public Administration), the places where such activities are undertaken, and possible responsive actions to be undertaken by the Public Administration.