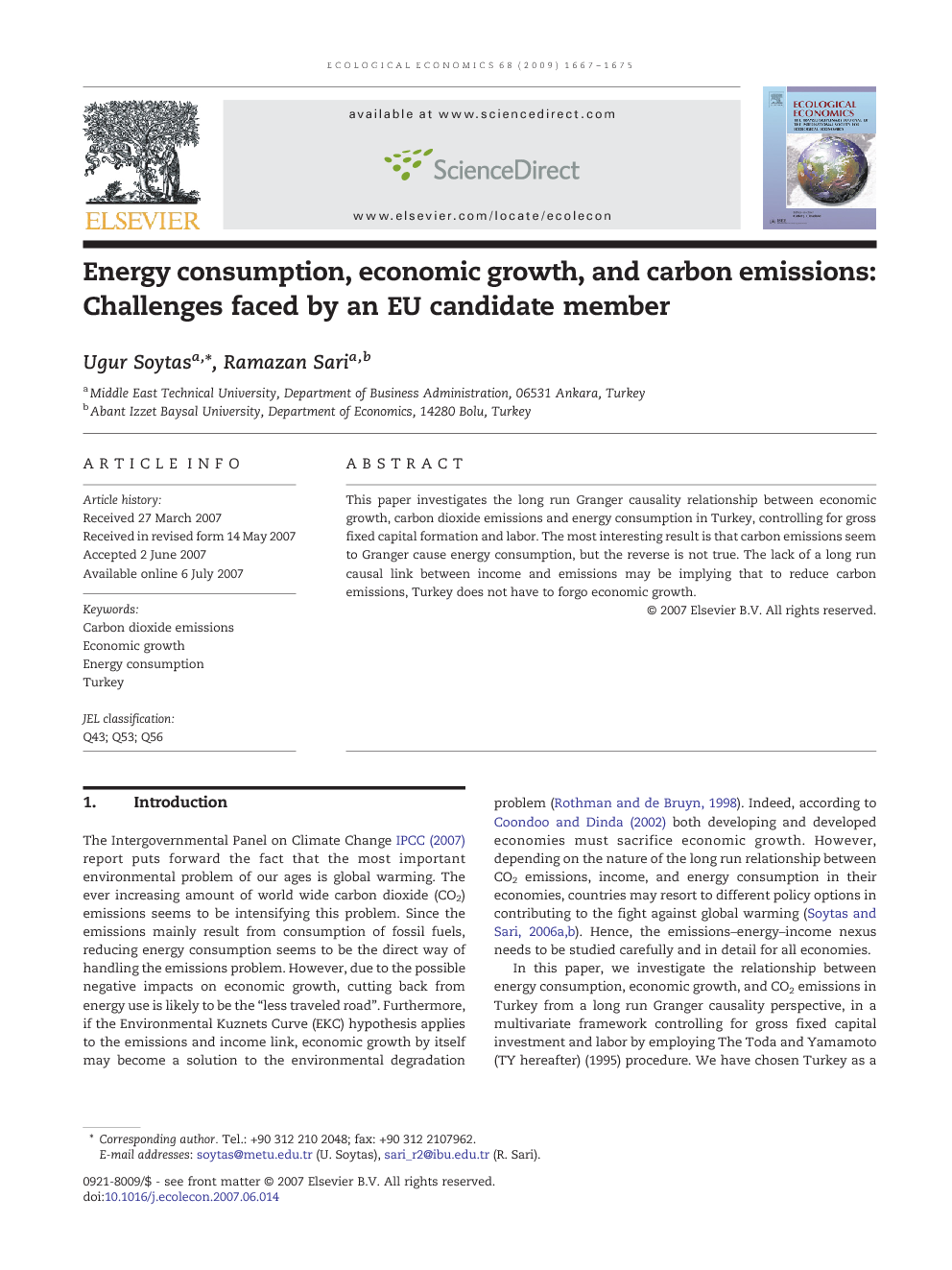 This paper investigates the long run Granger causality relationship between economic growth, carbon dioxide emissions and energy consumption in Turkey, controlling for gross fixed capital formation and labor. The most interesting result is that carbon emissions seem to Granger cause energy consumption, but the reverse is not true. The lack of a long run causal link between income and emissions may be implying that to reduce carbon emissions, Turkey does not have to forgo economic growth.

The Intergovernmental Panel on Climate Change IPCC (2007) report puts forward the fact that the most important environmental problem of our ages is global warming. The ever increasing amount of world wide carbon dioxide (CO2) emissions seems to be intensifying this problem. Since the emissions mainly result from consumption of fossil fuels, reducing energy consumption seems to be the direct way of handling the emissions problem. However, due to the possible negative impacts on economic growth, cutting back from energy use is likely to be the “less traveled road”. Furthermore, if the Environmental Kuznets Curve (EKC) hypothesis applies to the emissions and income link, economic growth by itself may become a solution to the environmental degradation problem (Rothman and de Bruyn, 1998). Indeed, according to Coondoo and Dinda (2002) both developing and developed economies must sacrifice economic growth. However, depending on the nature of the long run relationship between CO2 emissions, income, and energy consumption in their economies, countries may resort to different policy options in contributing to the fight against global warming (Soytas and Sari, 2006a and Soytas and Sari, 2006b). Hence, the emissions–energy–income nexus needs to be studied carefully and in detail for all economies. In this paper, we investigate the relationship between energy consumption, economic growth, and CO2 emissions in Turkey from a long run Granger causality perspective, in a multivariate framework controlling for gross fixed capital investment and labor by employing The Toda and Yamamoto (TY hereafter) (1995) procedure. We have chosen Turkey as a case study first because it is an emerging economy and a candidate country for full membership in the European Union (EU). Turkey needs to adjust her infrastructure, economy, and government policies (including environmental, energy, and growth policies) to make them inline with EU requirements. Secondly, with a 72.6% rise in GHG emissions in 2000–2004, Turkey has the fastest growing emissions in the world (UNFCCC, 2006), although her per capita emissions and per capita GDP are among the lowest ones of the countries in Annex 1 of the Kyoto Protocol. Thirdly, we want to examine whether Turkish concerns regarding negative effects of emission constraints on the economy may be justified, since this is the main reason why the country has not ratified the protocol. As the Turkish economy grows the pressure on energy security is also building up. Therefore, the country is in need of a sound long term plan that integrates energy, environment, and growth concerns. The analysis relies on recent time series techniques that offer potential solutions to the methodological problems listed in Stern (2004). The Toda and Yamamoto (1995) approach eliminates the need for pre-testing for cointegration and therefore avoids pre-test bias and is applicable for any arbitrary level of integration for the series used. The most striking result may be that the long run Granger causality is running from CO2 emissions to energy consumption in Turkey. That is, emissions improve the forecasts of energy consumption in Turkey, but not vice versa. This may have important policy implications for Turkey. The organization of the paper is as follows. In the next section we briefly review the literature. Then, we introduce the data definitions and discuss the time series properties of the variables in Section 3. In Section 4 we provide the empirical results and their discussions. Section 5 provides policy implications and concludes.

The energy–environment–income nexus poses important challenges to Turkish policy makers, considering the high economic growth rate and high CO2 growth rate this emerging market experiences as a candidate member to the EU. The EU has set ambitious targets in reducing the GHG emissions by about 60–80% by 2050 compared to 1990 (Commission of the European Communities (CEC, 2007)). Although emission reduction does not yet seem to be a membership criterion, it is highly likely that the EU will require Turkey to take some measures in line with the union's goals. In the light of the uni-directional causality running from carbon emissions to energy use, one may argue that the main contribution in meeting the GHG emission targets would come from reducing the share of fossil fuels in energy consumption, since coal fired power plants are important sources of electricity supply in Turkey. In order to reduce the dependence of the economy on imported energy and to meet growing energy demand, Turkey cannot overlook its coal reserves. This is exactly what the government seems to be doing via opening bids for coal fired plants. However, since coal emits twice as much CO2 as natural gas, sustainable coal technologies should be imposed on the new coal power plants with CO2 capture and storage facilities. Gradually, existing plants should also install carbon capture and storage. This may prove to be costly, and dependence on imports may rise, especially if the technology is imported. Hence, significant investment is needed in improving the sustainable fossil fuel technologies. Turkey may have a big potential in improving her energy efficiency as an emerging market and a big responsibility as a future member of the EU. The EU target is to reduce energy use by 20% by 2020 (CEC, 2007). According to our results, energy consumption does not seem to be Granger causing income in Turkey in the long run. Hence, direct measures at reducing energy consumptions may also be taken into account without much concern for long run economic growth. Increased competition in the Turkish energy market will contribute to the country's energy efficiency. Indeed, according to the CEC (2007), there should be three internal energy market targets: competitiveness, sustainability, and energy security. CEC argues that the latter two can be achieved by increased competitiveness in the EU energy market. The Turkish energy market does not seem to be meeting these targets very well. The government policies tend to view privatization as equivalent to competitiveness. However, as Ercan and Öz (2004) note, after privatization, the long term purchase guarantees of the Turkish government at fixed prices may not make economic sense, if the aim is to promote competitiveness and efficiency. CEC (2007) states that, generalized price caps may have negative effects, because they tend to suppress price signals that may be pointing out a need for changes in investment plans; hence, leading to policy changes such as underinvestment, jeopardizing the future energy security, and discouraging more efficient firms to take part in clean energy production. Turkey is facing an investment problem. Regardless of which alternative energy sources she wants to develop or utilize, a large portion of this investment would be through accumulating capital based on imported technology. In order to reduce dependence on imports, Turkey needs to adopt a strategic long term plan in technology development. In this paper we only accounted for gross fixed capital investments. It may be worthwhile for future work to take investments in technology and its effects into account as well.