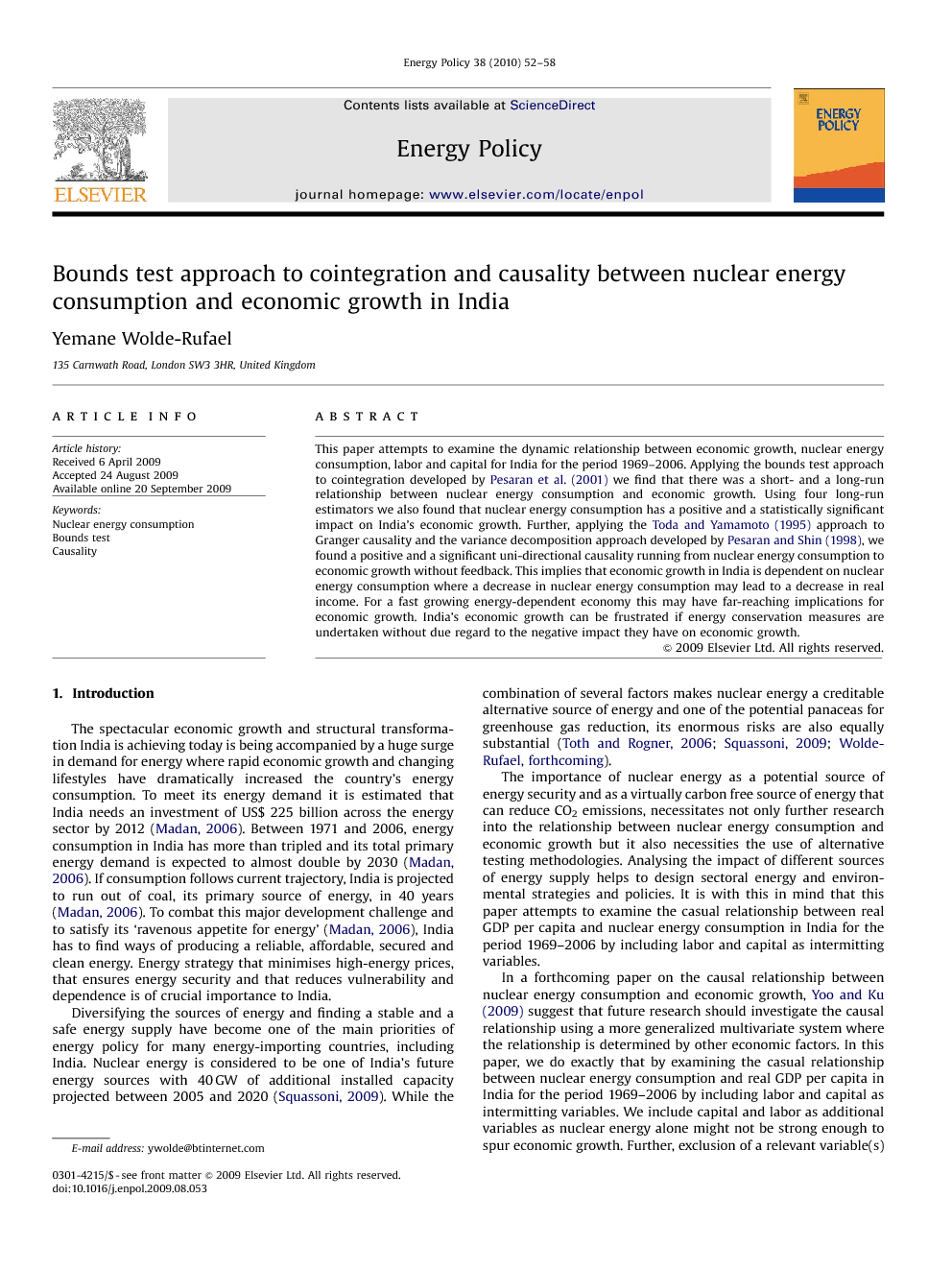 The spectacular economic growth and structural transformation India is achieving today is being accompanied by a huge surge in demand for energy where rapid economic growth and changing lifestyles have dramatically increased the country's energy consumption. To meet its energy demand it is estimated that India needs an investment of US$ 225 billion across the energy sector by 2012 (Madan, 2006). Between 1971 and 2006, energy consumption in India has more than tripled and its total primary energy demand is expected to almost double by 2030 (Madan, 2006). If consumption follows current trajectory, India is projected to run out of coal, its primary source of energy, in 40 years (Madan, 2006). To combat this major development challenge and to satisfy its ‘ravenous appetite for energy’ (Madan, 2006), India has to find ways of producing a reliable, affordable, secured and clean energy. Energy strategy that minimises high-energy prices, that ensures energy security and that reduces vulnerability and dependence is of crucial importance to India. Diversifying the sources of energy and finding a stable and a safe energy supply have become one of the main priorities of energy policy for many energy-importing countries, including India. Nuclear energy is considered to be one of India's future energy sources with 40 GW of additional installed capacity projected between 2005 and 2020 (Squassoni, 2009). While the combination of several factors makes nuclear energy a creditable alternative source of energy and one of the potential panaceas for greenhouse gas reduction, its enormous risks are also equally substantial (Toth and Rogner, 2006; Squassoni, 2009; Wolde-Rufael, forthcoming). The importance of nuclear energy as a potential source of energy security and as a virtually carbon free source of energy that can reduce CO2 emissions, necessitates not only further research into the relationship between nuclear energy consumption and economic growth but it also necessities the use of alternative testing methodologies. Analysing the impact of different sources of energy supply helps to design sectoral energy and environmental strategies and policies. It is with this in mind that this paper attempts to examine the casual relationship between real GDP per capita and nuclear energy consumption in India for the period 1969–2006 by including labor and capital as intermitting variables. In a forthcoming paper on the causal relationship between nuclear energy consumption and economic growth, Yoo and Ku (2009) suggest that future research should investigate the causal relationship using a more generalized multivariate system where the relationship is determined by other economic factors. In this paper, we do exactly that by examining the casual relationship between nuclear energy consumption and real GDP per capita in India for the period 1969–2006 by including labor and capital as intermitting variables. We include capital and labor as additional variables as nuclear energy alone might not be strong enough to spur economic growth. Further, exclusion of a relevant variable(s) makes the estimates not only biased as well as inconsistent but also no-causality in a bivariate system can result from neglected variables (Lütkepohl, 1982). It is possible that the introduction of a third or a fourth variable in the causality framework may not only alter the direction of causality but also the magnitude of the estimates (Loizides and Vamvoukas, 2005). In addition, since a four-variable case incorporates more information than a bivariate case, the causal inference drawn may be more reliable (Loizides and Vamvoukas, 2005). Thus, the bivariate causality tests so far conducted may be invalid due to the omission of an important variable(s). In this paper, to establish a long-run and a causal relationship between economic growth, nuclear energy consumption, capital and labor we follow four steps. First, we use the autoregressive distributive lag (ARDL) approach to cointegration developed by Pesaran et al. (2001) which can be applied regardless of whether the series are I(0) or I(1) and thus avoids the problems raised by pre-testing for unit root tests. An added bonus of the ARDL approach is that unlike other conventional tests for cointegration, it can be applied to studies that have a small sample size such as our study with 38 observations (Narayan, 2005). Second, since establishing a long-run relationship between the series is important for India's energy policy and strategy, we want to ensure that our results are not contingent upon only one testing approach. Thus, our strategy is also to compare results obtained from several tests and examine whether the preponderance of the evidence makes a convincing case for robust evidence. Therefore, to complement and check the robustness of the Pesaran et al. (2001) long-run estimators, we have also used three additional long-run estimators: (a) the dynamic ordinary least squares (DOLS) developed by Stock and Watson (1993), (b) the fully modified ordinary least squares (FMOLS) developed by Phillips and Hansen (1990) and (c) the ordinary least squares (OLSQ). Third, we use the Toda and Yamamoto (1995) Granger causality procedure which is valid regardless of whether a series is I(0), I(1) or I(2), non-cointegrated or cointegrated of any arbitrary order. Fourth, to test the strength of our causality test, we decomposed the forecast-error variance of GDP per capita into proportions attributed to shocks in all variables in the system including itself using the generalised forecast-error variance decomposition analysis developed by Pesaran and Shin (1998), which is invariant to the ordering of the series. The rest of the paper is structured as follows. In Section 2 we present a short summary of the empirical literature on the energy–growth nexus, with a particular emphasis on the relationship between nuclear energy consumption and economic growth. This is followed in Section 3 by a discussion of the methodology used. The empirical evidence is presented in Section 4 while the summary and the policy implications of our findings are outlined in Section 5.