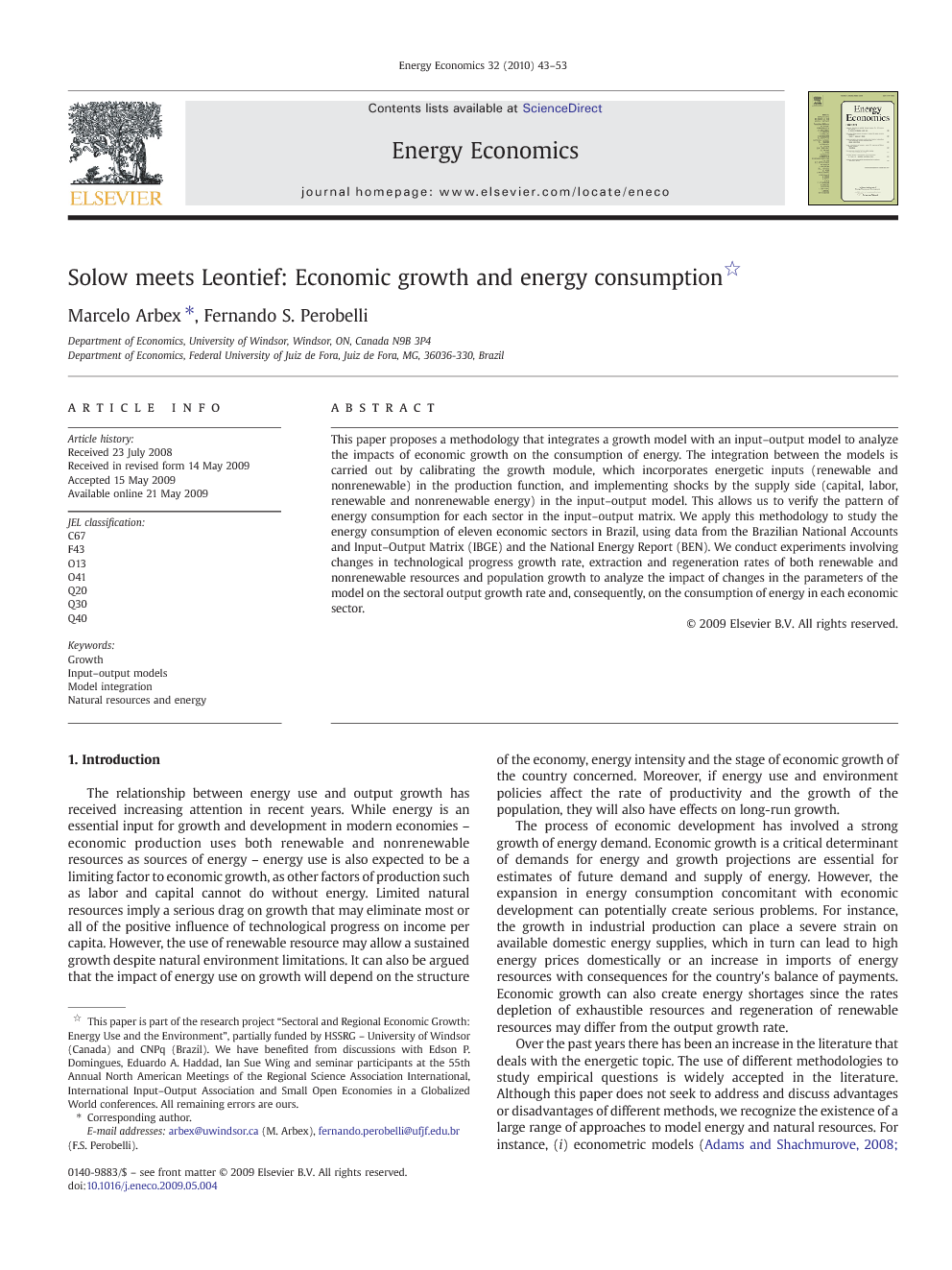 This paper proposes a methodology that integrates a growth model with an input–output model to analyze the impacts of economic growth on the consumption of energy. The integration between the models is carried out by calibrating the growth module, which incorporates energetic inputs (renewable and nonrenewable) in the production function, and implementing shocks by the supply side (capital, labor, renewable and nonrenewable energy) in the input–output model. This allows us to verify the pattern of energy consumption for each sector in the input–output matrix. We apply this methodology to study the energy consumption of eleven economic sectors in Brazil, using data from the Brazilian National Accounts and Input–Output Matrix (IBGE) and the National Energy Report (BEN). We conduct experiments involving changes in technological progress growth rate, extraction and regeneration rates of both renewable and nonrenewable resources and population growth to analyze the impact of changes in the parameters of the model on the sectoral output growth rate and, consequently, on the consumption of energy in each economic sector.

This paper studies the impacts of economic growth on the consumption of energy. We propose a methodology that integrates a growth model with an input–output model. This model integration contributes to the literature by potentially minimizing these separated model weaknesses. Our approach presents clear advantages when compared to each approach alone, i.e. integrated model versus a growth model and an input–output model. In particular, regarding the Leontief approach, our model incorporates technological progress through a Cobb–Douglas production function, uses a calibration process to make forecasts and allows for substitutability between inputs in the production process. These features are not standard or regular in the input–output approach. For the macroeconomic approach, the relationships between the economic agents are established in the input–output framework, which eliminate the necessity to model such complex interactions. Several studies suggest that in order to better understand the development over time of energy use, we have to use a disaggregated microeconomic approach. This is the approach proposed in this paper. A possible extension of this study is to close the model for consumption and consider the residential energy use. A natural extension of this approach is to model the energy sector as a sector of the economy, where different energy commodities would be treated differently. We leave this for future research.