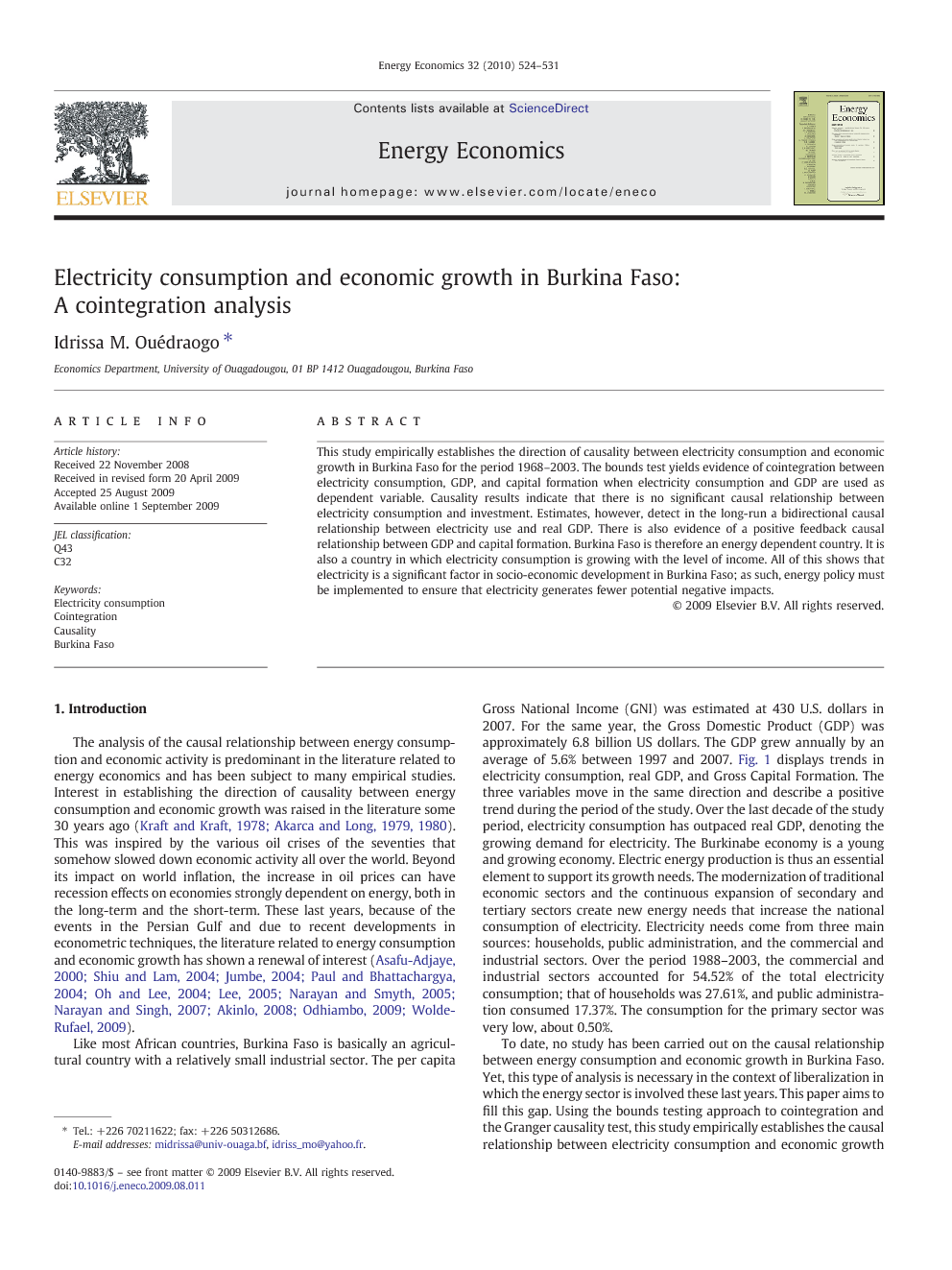 The analysis of the causal relationship between energy consumption and economic activity is predominant in the literature related to energy economics and has been subject to many empirical studies. Interest in establishing the direction of causality between energy consumption and economic growth was raised in the literature some 30 years ago (Kraft and Kraft, 1978, Akarca and Long, 1979 and Akarca and Long, 1980). This was inspired by the various oil crises of the seventies that somehow slowed down economic activity all over the world. Beyond its impact on world inflation, the increase in oil prices can have recession effects on economies strongly dependent on energy, both in the long-term and the short-term. These last years, because of the events in the Persian Gulf and due to recent developments in econometric techniques, the literature related to energy consumption and economic growth has shown a renewal of interest (Asafu-Adjaye, 2000, Shiu and Lam, 2004, Jumbe, 2004, Paul and Bhattachargya, 2004, Oh and Lee, 2004, Lee, 2005, Narayan and Smyth, 2005, Narayan and Singh, 2007, Akinlo, 2008, Odhiambo, 2009 and Wolde-Rufael, 2009). Like most African countries, Burkina Faso is basically an agricultural country with a relatively small industrial sector. The per capita Gross National Income (GNI) was estimated at 430 U.S. dollars in 2007. For the same year, the Gross Domestic Product (GDP) was approximately 6.8 billion US dollars. The GDP grew annually by an average of 5.6% between 1997 and 2007. Fig. 1 displays trends in electricity consumption, real GDP, and Gross Capital Formation. The three variables move in the same direction and describe a positive trend during the period of the study. Over the last decade of the study period, electricity consumption has outpaced real GDP, denoting the growing demand for electricity. The Burkinabe economy is a young and growing economy. Electric energy production is thus an essential element to support its growth needs. The modernization of traditional economic sectors and the continuous expansion of secondary and tertiary sectors create new energy needs that increase the national consumption of electricity. Electricity needs come from three main sources: households, public administration, and the commercial and industrial sectors. Over the period 1988–2003, the commercial and industrial sectors accounted for 54.52% of the total electricity consumption; that of households was 27.61%, and public administration consumed 17.37%. The consumption for the primary sector was very low, about 0.50%.To date, no study has been carried out on the causal relationship between energy consumption and economic growth in Burkina Faso. Yet, this type of analysis is necessary in the context of liberalization in which the energy sector is involved these last years. This paper aims to fill this gap. Using the bounds testing approach to cointegration and the Granger causality test, this study empirically establishes the causal relationship between electricity consumption and economic growth in Burkina Faso, and further elaborates on the implications and possible forecasts for the new direction of the national energy policy. This paper is organized as follows. Section 2 describes the energy sector in Burkina Faso and Section 3 provides a brief review of literature related to energy consumption and economic growth. Section 4 outlines the methodology used in the study. Following, Section 5 presents the empirical results of the research and the last section concludes the study.