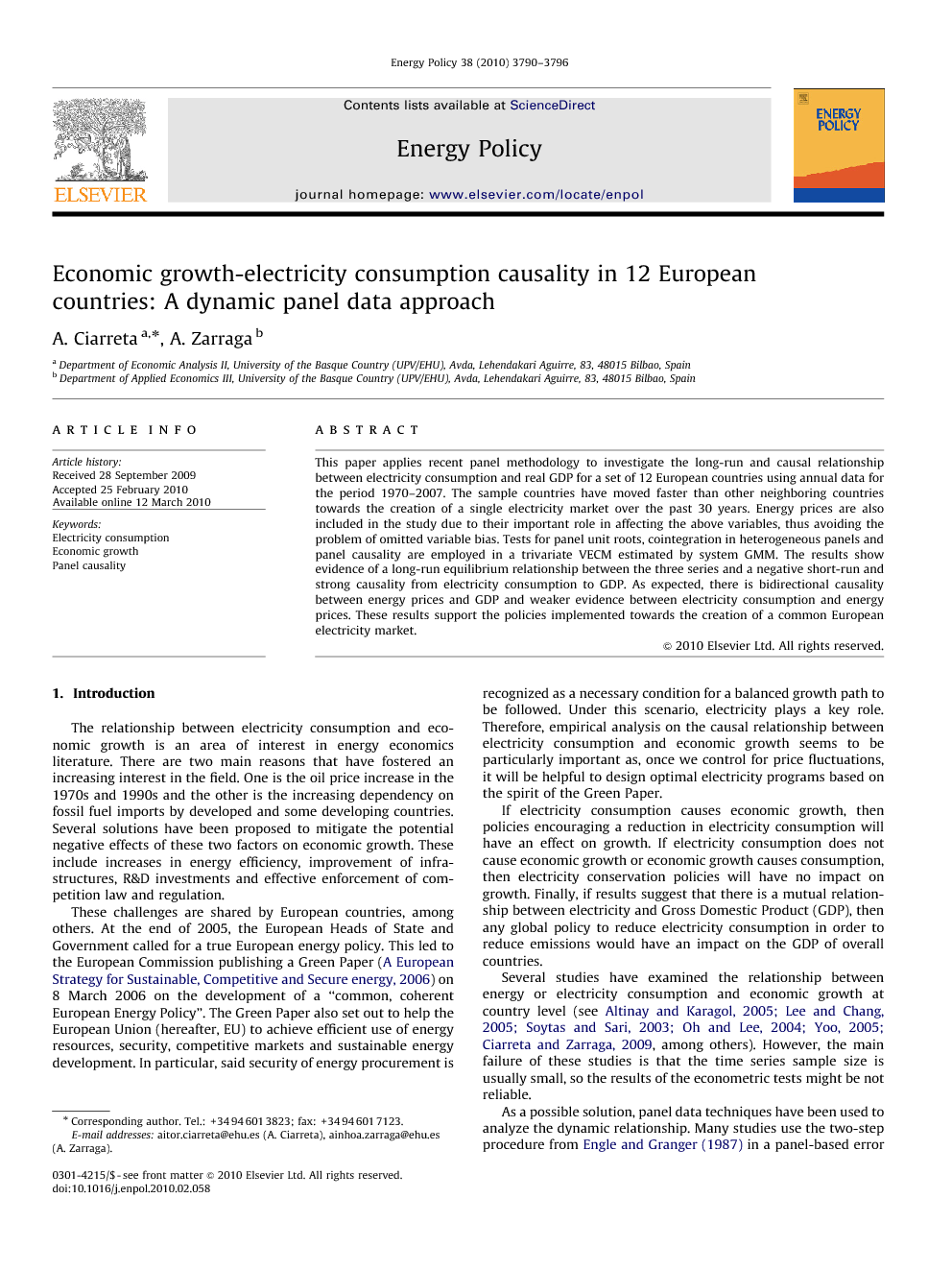 This paper applies recent panel methodology to investigate the long-run and causal relationship between electricity consumption and real GDP for a set of 12 European countries using annual data for the period 1970–2007. The sample countries have moved faster than other neighboring countries towards the creation of a single electricity market over the past 30 years. Energy prices are also included in the study due to their important role in affecting the above variables, thus avoiding the problem of omitted variable bias. Tests for panel unit roots, cointegration in heterogeneous panels and panel causality are employed in a trivariate VECM estimated by system GMM. The results show evidence of a long-run equilibrium relationship between the three series and a negative short-run and strong causality from electricity consumption to GDP. As expected, there is bidirectional causality between energy prices and GDP and weaker evidence between electricity consumption and energy prices. These results support the policies implemented towards the creation of a common European electricity market.

We study the causal relationship between electricity consumption and economic growth for a panel of 12 European countries controlling for energy prices. We use panel data to avoid the problems of standard econometric methods when applied to short-time series, and implement heterogenous panel cointegration tests and panel system GMM estimation to determine the dynamic relationships between the series. We find evidence of cointegration between the series and, therefore, the existence of a long-run equilibrium relationship. EP is the only variable that responds to a deviation from that equilibrium in the previous period. With respect to causality results, we find evidence of unidirectional and negative short-run and strong causal relation from EC to GDP. The implications of our results for a common European electricity market are relevant. According to our findings, the actual electricity policies and the prospective ones of the European Commissions directed towards a more efficient use of existing capacity, investment in new technologies of generation and improvement of interconnections are in the right direction if the target is to favor economic growth. There is another implication on the production structure of the sample countries. Electricity intensive sectors still play a significant role in some (for instance Germany, Italy and France), and our conclusions support the implementation of policies that help to shift to less demanding sectors. Furthermore, the existence of capacity constraints on generation is particularly relevant in countries with limited electricity availability (mainly Belgium, Denmark, Finland and Italy). Thus, improvement of the interconnections would also result in further efficiency gains.