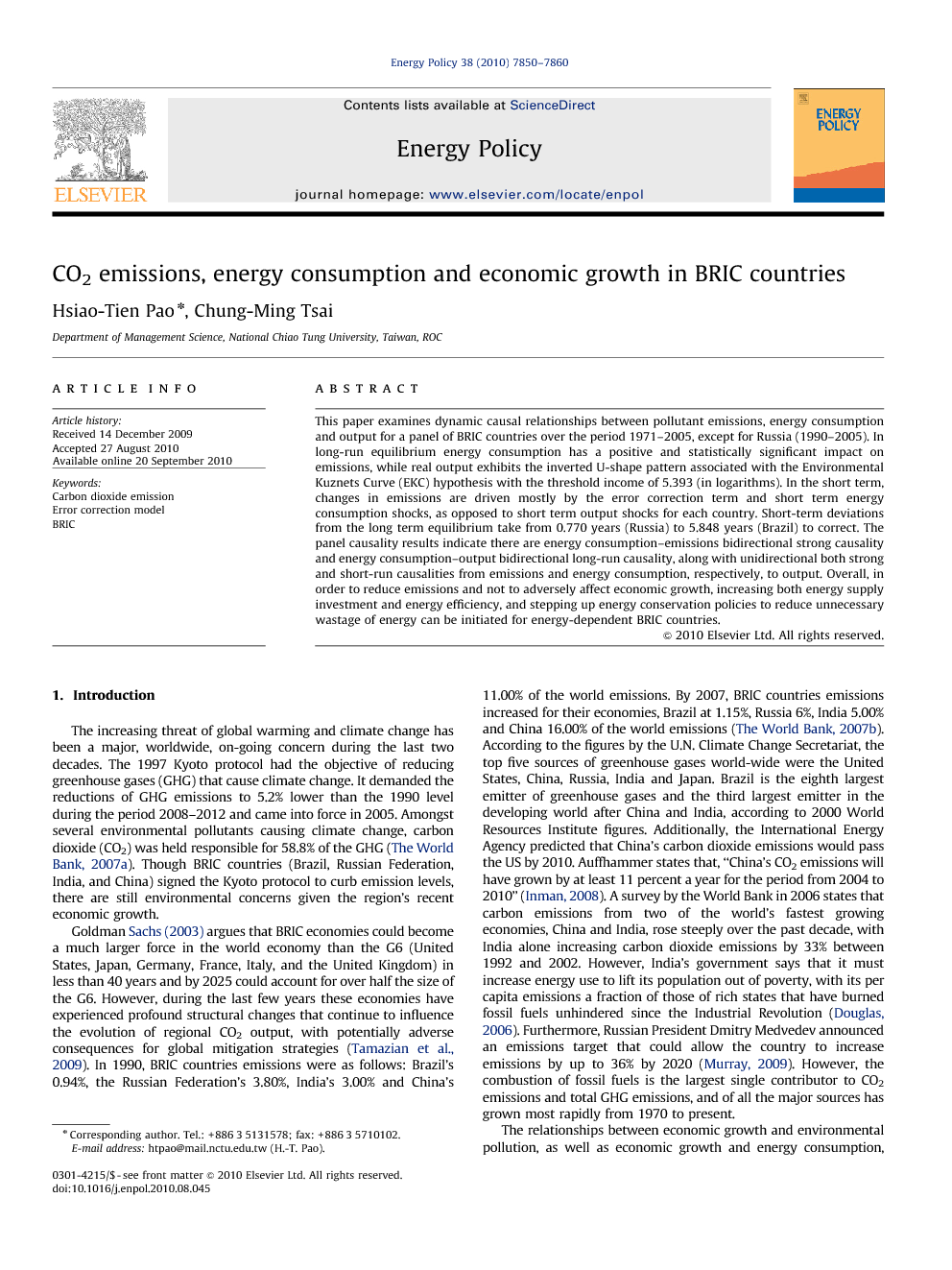 This paper examines dynamic causal relationships between pollutant emissions, energy consumption and output for a panel of BRIC countries over the period 1971–2005, except for Russia (1990–2005). In long-run equilibrium energy consumption has a positive and statistically significant impact on emissions, while real output exhibits the inverted U-shape pattern associated with the Environmental Kuznets Curve (EKC) hypothesis with the threshold income of 5.393 (in logarithms). In the short term, changes in emissions are driven mostly by the error correction term and short term energy consumption shocks, as opposed to short term output shocks for each country. Short-term deviations from the long term equilibrium take from 0.770 years (Russia) to 5.848 years (Brazil) to correct. The panel causality results indicate there are energy consumption–emissions bidirectional strong causality and energy consumption–output bidirectional long-run causality, along with unidirectional both strong and short-run causalities from emissions and energy consumption, respectively, to output. Overall, in order to reduce emissions and not to adversely affect economic growth, increasing both energy supply investment and energy efficiency, and stepping up energy conservation policies to reduce unnecessary wastage of energy can be initiated for energy-dependent BRIC countries.

The increasing threat of global warming and climate change has been a major, worldwide, on-going concern during the last two decades. The 1997 Kyoto protocol had the objective of reducing greenhouse gases (GHG) that cause climate change. It demanded the reductions of GHG emissions to 5.2% lower than the 1990 level during the period 2008–2012 and came into force in 2005. Amongst several environmental pollutants causing climate change, carbon dioxide (CO2) was held responsible for 58.8% of the GHG (The World Bank, 2007a). Though BRIC countries (Brazil, Russian Federation, India, and China) signed the Kyoto protocol to curb emission levels, there are still environmental concerns given the region’s recent economic growth. Goldman Sachs (2003) argues that BRIC economies could become a much larger force in the world economy than the G6 (United States, Japan, Germany, France, Italy, and the United Kingdom) in less than 40 years and by 2025 could account for over half the size of the G6. However, during the last few years these economies have experienced profound structural changes that continue to influence the evolution of regional CO2 output, with potentially adverse consequences for global mitigation strategies (Tamazian et al., 2009). In 1990, BRIC countries emissions were as follows: Brazil’s 0.94%, the Russian Federation’s 3.80%, India’s 3.00% and China’s 11.00% of the world emissions. By 2007, BRIC countries emissions increased for their economies, Brazil at 1.15%, Russia 6%, India 5.00% and China 16.00% of the world emissions (The World Bank, 2007b). According to the figures by the U.N. Climate Change Secretariat, the top five sources of greenhouse gases world-wide were the United States, China, Russia, India and Japan. Brazil is the eighth largest emitter of greenhouse gases and the third largest emitter in the developing world after China and India, according to 2000 World Resources Institute figures. Additionally, the International Energy Agency predicted that China’s carbon dioxide emissions would pass the US by 2010. Auffhammer states that, “China’s CO2 emissions will have grown by at least 11 percent a year for the period from 2004 to 2010” (Inman, 2008). A survey by the World Bank in 2006 states that carbon emissions from two of the world’s fastest growing economies, China and India, rose steeply over the past decade, with India alone increasing carbon dioxide emissions by 33% between 1992 and 2002. However, India’s government says that it must increase energy use to lift its population out of poverty, with its per capita emissions a fraction of those of rich states that have burned fossil fuels unhindered since the Industrial Revolution (Douglas, 2006). Furthermore, Russian President Dmitry Medvedev announced an emissions target that could allow the country to increase emissions by up to 36% by 2020 (Murray, 2009). However, the combustion of fossil fuels is the largest single contributor to CO2 emissions and total GHG emissions, and of all the major sources has grown most rapidly from 1970 to present. The relationships between economic growth and environmental pollution, as well as economic growth and energy consumption, have been intensively analyzed empirically over the past two decades. However, the empirical evidence remains controversial and ambiguous to date. The first nexus is closely related to testing the validity of the Environmental Kuznets Curve (EKC) hypothesis. The EKC hypothesis postulates that the relationship between economic development and the environment resembles an inverted U-curve (Ang, 2007). That is, environmental pollution levels increase as a country develops, but begin to decrease as rising incomes pass beyond a turning point. This hypothesis was first proposed and tested by Grossman and Krueger (1991). Stern (2004) and Dinda (2004) provide extensive review surveys of these studies. Further examples consist of Friedl and Getzner (2003), Martinez-Zarzoso and Bengochea-Morancho (2004), Dinda and Coondoo (2006) and Managi and Jena (2008). However, higher national income does not necessarily warrant greater efforts to contain the emissions of pollutants. More recently, Coondoo and Dinda (2008), Akbostanci et al. (2009), and Lee and Lee (2009) examine the time series dynamics between income and emissions to infer the direction of causality. The empirical results appear to be inconclusive. The second strand is related to the output and energy consumption nexus. This nexus suggests that economic growth and energy consumption may be jointly determined, because higher economic development requires more energy consumption. Likewise, more efficient energy use needs a higher level of economic development. Therefore, the direction of causality may not be determined prior. Following the seminal study by Kraft and Kraft (1978), an increasing number of studies have assessed the empirical evidence by employing Granger causality and cointegration models. Recent studies include those by Mehrara (2007), Narayan et al. (2008), Belloumi (2009) and Pao (2009). Finally, a combined approach of these two approaches has emerged in recent literature, facilitating the examination of dynamic relationships between economic growth, energy consumption and environmental pollutants together. Ang (2007) and Soytas et al. (2007) initiated this combined line of research. Recent works include Ang (2008), Halicioglu (2009) and Zhang and Cheng (2009) for a single country study. Halicioglu (2009) and Zhang and Cheng (2009) extended the above mentioned multivariate framework further by including the impacts of foreign trade and urban population, respectively into the nexus, in order to address omitted variable bias in econometric estimation. In a cross-country study, Soytas and Sari (2009) and Apergis and Payne (2009) adopted per capita panel data set, but no extended variables to analyze the above mentioned relationships. However, there is no systematic time series investigation so far analyzing the relationship between pollutant emissions, energy use and real output by BRIC countries. This study attempts to fill the gap in the literature. The dynamic interrelationship in the output-energy-environment nexus is analyzed by applying panel cointegration technique and panel Granger causality link in the short run and long run. Short-run elasticities are calculated using error correction models. Many studies suggest that panel-based tests are more accurate than tests based on individual series for a short span of data (Al-Iriani, 2006). The remainder of this paper is organized as follows. Section 2 discuses the data used. Section 3 outlines the model and estimation methodology. Section 4 presents the empirical findings. Section 5 provides a discussion and policy implications, with the final section summarizing and concluding the paper.