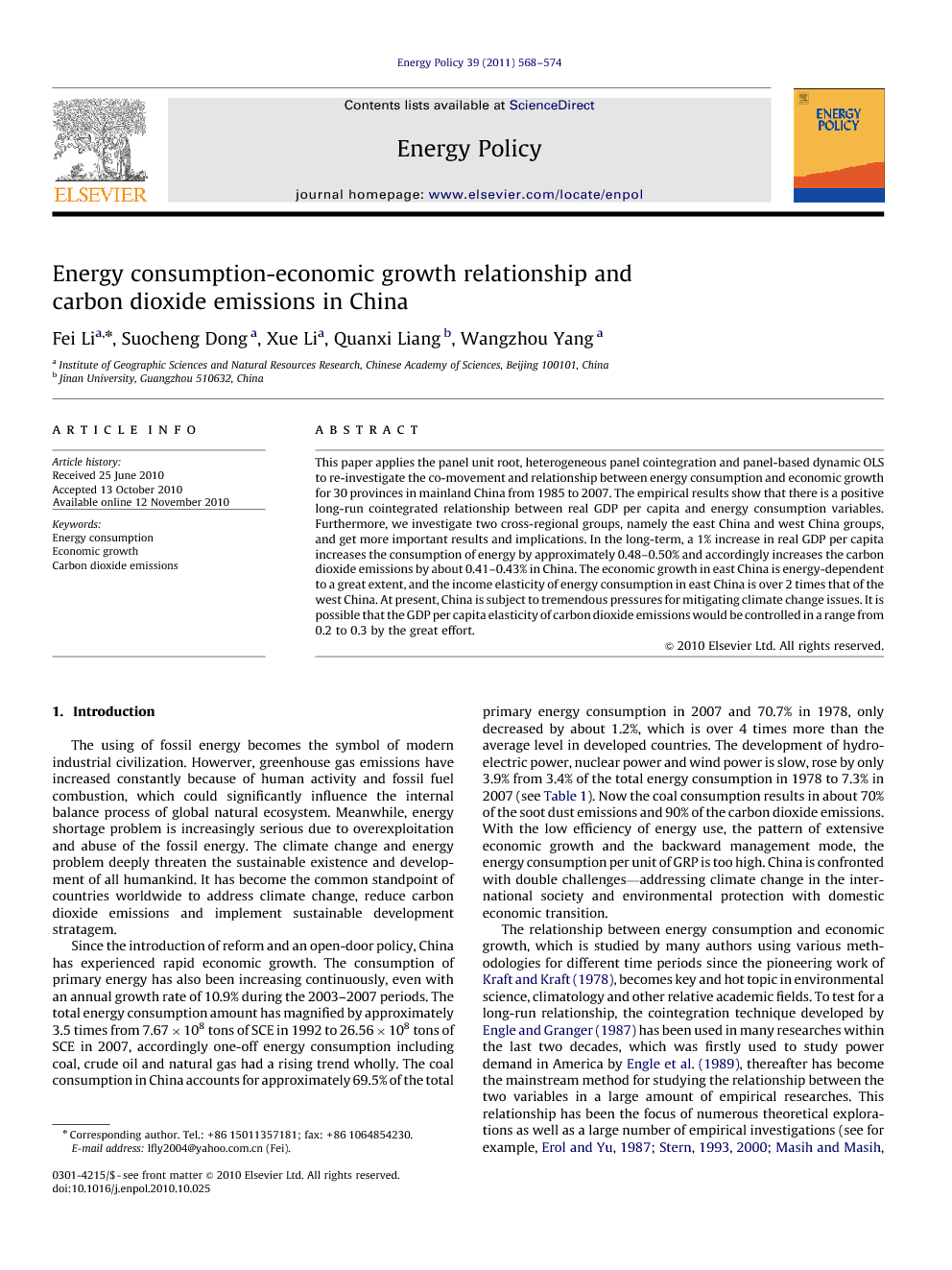 This paper applies the panel unit root, heterogeneous panel cointegration and panel-based dynamic OLS to re-investigate the co-movement and relationship between energy consumption and economic growth for 30 provinces in mainland China from 1985 to 2007. The empirical results show that there is a positive long-run cointegrated relationship between real GDP per capita and energy consumption variables. Furthermore, we investigate two cross-regional groups, namely the east China and west China groups, and get more important results and implications. In the long-term, a 1% increase in real GDP per capita increases the consumption of energy by approximately 0.48–0.50% and accordingly increases the carbon dioxide emissions by about 0.41–0.43% in China. The economic growth in east China is energy-dependent to a great extent, and the income elasticity of energy consumption in east China is over 2 times that of the west China. At present, China is subject to tremendous pressures for mitigating climate change issues. It is possible that the GDP per capita elasticity of carbon dioxide emissions would be controlled in a range from 0.2 to 0.3 by the great effort.

In this paper, we argue that energy is indeed an essential factor in production and empirically re-examine the long-run co-movement between energy consumption and real GDP per capita on a panel dataset comprised of 30 provinces in China mainland from 1985 to 2007, employing panel unit root test, cointegration test and dynamic OLS developed recently, which have the advantage of higher power and more robust conclusion, since the time series data may yield unreliable and inconsistent results with the short time spans of typical datasets. Furthermore, we investigate not just the whole economy but rather the two groups of provinces, the east China and west China members. The results obtained here are consistent with those of Yu and Meng (2008), Wu et al. (2008), who concluded that there is a long-run equilibrium relationship between economic growth and energy consumption in China, and provide solid support in favor of the past changes in energy consumption that have had a significant impact on economic growth in China. Therefore, one of the most urgent tasks for authorities in developing countries would be to establish well planned, long-term energy policy system, in order to avoid excessive shocks to economic growth. In addition, unquestionably, with the sustainable economic growth, greenhouse gas emissions increase continuously in China. Balanced against this increase in energy demand are energy security and climate change issues. It is suggested that a 1% increase in real GDP per capita increases carbon dioxide emissions by a value between 0.41% and 0.43% in China. In the future, we need to do our utmost to explore new and important ways to change the current economic growth pattern, to develop low-carbon economy and circular economy actively, and to combine construction of resources-saving societies and environmentally-friendly societies with construction of innovative countries. It is possible that the carbon dioxide emissions elasticity of GDP per capita would be controlled in a range from 0.2 to 0.3 by the great effort. Furthermore, we proceed to investigate the group effects between two. Our results contradict the findings of Yu and Meng (2008) who concluded that there is no cointegration relationship between energy consumption and economic growth in west China. However, the results obtained here are consistent with Wu et al. (2008) who found evidence of long-run relationship in both the east China and west China. In east China, economic growth is based on extensive energy use mode, energy use efficiency is low, and the pollution emissions become more and more serious. Due to the need of mitigation of climate change in the international society, the nuclear energy and the renewable energy should be promoted rapidly. Renewable energy can play an important role in reducing a developing country’s dependence on imported energy products, and can also play an important role in helping to address climate change issues. It is urgently demanded to stimulate the development of low-carbon economy and to implement a green development strategy in east China at first. In west China, the dematerializing cycle economy development policy should be carried out at the beginning of the developing stage, in order to improve energy use efficiency and reduce emissions. At last, in contrast to the most previous studies, we employ the variable GDP per capita weighing economy growth, which can be better in reflecting the situation of behavioral preference and household energy consumption to some extent. The quantity of China residential energy consumption in urban region will increase rapidly in the future, hence the energy-saving and emissions-reducing policy should be carried out not only in the production field, but also in daily lives. Every person can use energy-saving devices and economize household energy to mitigate climate change. The energy-saving building can be developed and architectural planning should be improved in the future. The history experiences indicate that, the new round of economic development, structural adjustment and technical innovation would begin possibly, after economic crisis and financial crisis. How to carry out energy-saving and emissions-reducing policies? How to integrate economic development and mitigation of climate change? These will be the key problems that need urgent research and solution in China.