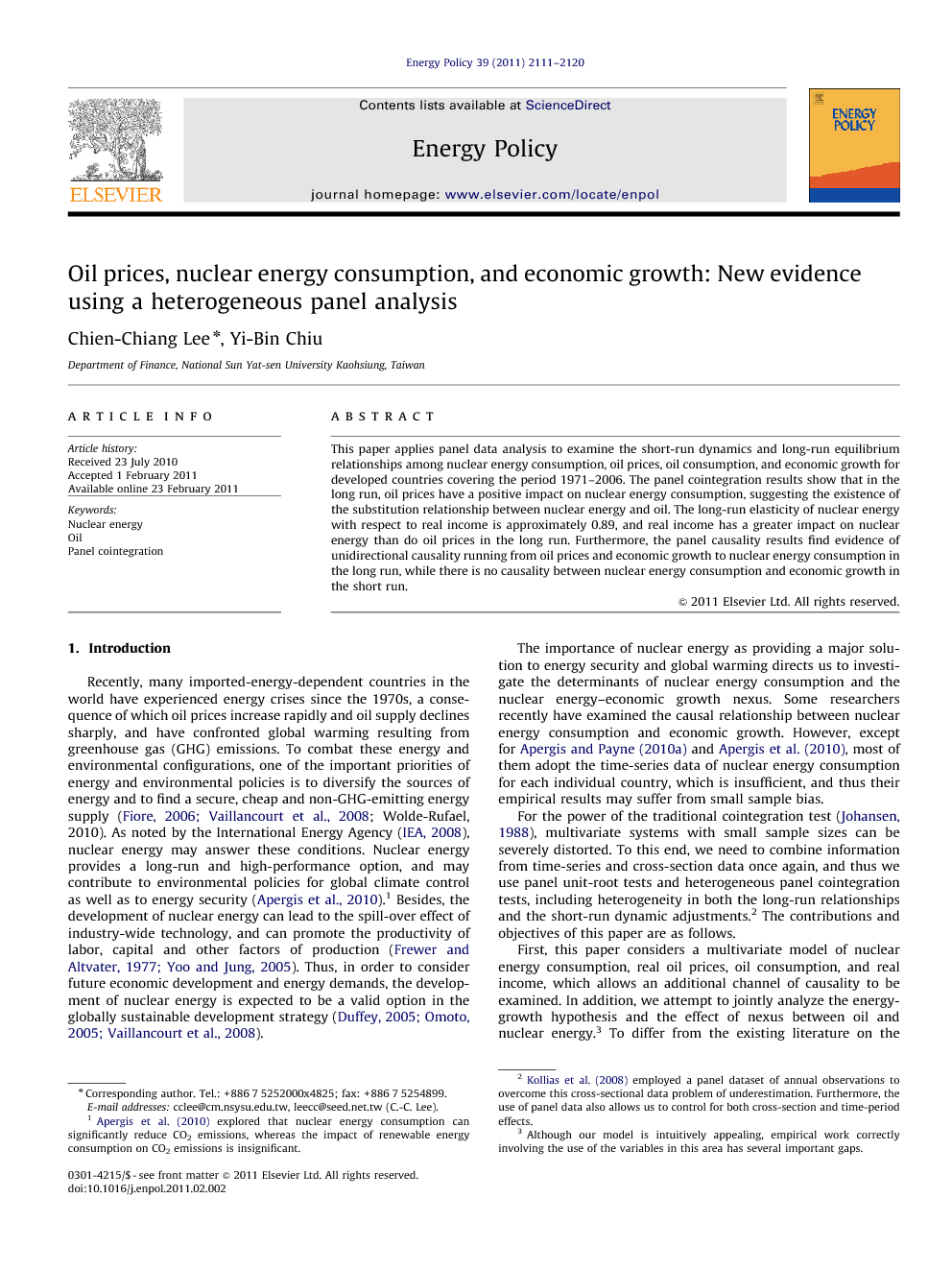 Recently, many imported-energy-dependent countries in the world have experienced energy crises since the 1970s, a consequence of which oil prices increase rapidly and oil supply declines sharply, and have confronted global warming resulting from greenhouse gas (GHG) emissions. To combat these energy and environmental configurations, one of the important priorities of energy and environmental policies is to diversify the sources of energy and to find a secure, cheap and non-GHG-emitting energy supply (Fiore, 2006 and Vaillancourt et al., 2008; Wolde-Rufael, 2010). As noted by the International Energy Agency (IEA, 2008), nuclear energy may answer these conditions. Nuclear energy provides a long-run and high-performance option, and may contribute to environmental policies for global climate control as well as to energy security (Apergis et al., 2010).1 Besides, the development of nuclear energy can lead to the spill-over effect of industry-wide technology, and can promote the productivity of labor, capital and other factors of production (Frewer and Altvater, 1977 and Yoo and Jung, 2005). Thus, in order to consider future economic development and energy demands, the development of nuclear energy is expected to be a valid option in the globally sustainable development strategy (Duffey, 2005, Omoto, 2005 and Vaillancourt et al., 2008). The importance of nuclear energy as providing a major solution to energy security and global warming directs us to investigate the determinants of nuclear energy consumption and the nuclear energy–economic growth nexus. Some researchers recently have examined the causal relationship between nuclear energy consumption and economic growth. However, except for Apergis and Payne (2010a) and Apergis et al. (2010), most of them adopt the time-series data of nuclear energy consumption for each individual country, which is insufficient, and thus their empirical results may suffer from small sample bias. For the power of the traditional cointegration test (Johansen, 1988), multivariate systems with small sample sizes can be severely distorted. To this end, we need to combine information from time-series and cross-section data once again, and thus we use panel unit-root tests and heterogeneous panel cointegration tests, including heterogeneity in both the long-run relationships and the short-run dynamic adjustments.2 The contributions and objectives of this paper are as follows. First, this paper considers a multivariate model of nuclear energy consumption, real oil prices, oil consumption, and real income, which allows an additional channel of causality to be examined. In addition, we attempt to jointly analyze the energy-growth hypothesis and the effect of nexus between oil and nuclear energy.3 To differ from the existing literature on the nuclear energy–income nexus that does not take oil consumption and real oil prices into account, we can estimate the cross-price elasticity of nuclear energy with respect to oil, and then analyze whether a substitute or complementary relationship between nuclear energy and oil exists. Second, in this paper we test the long-run relationship among these variables employing the heterogeneous panel cointegration test developed by Pedroni (2004), which allows for cross-sectional interdependency among different individual effects. The elasticities of oil prices and real income for nuclear energy are estimated using the dynamic OLS (hereafter DOLS; Kao and Chiang, 2000) technique for heterogeneous cointegrated panels. Third, since the causal relationship between nuclear energy consumption and economic growth and that between oil prices and nuclear energy consumption may run in either or both directions – whether or not being transitory or permanent – the estimations of the vector error-correction model (VECM) which we use to test the statistical causality hypothesis are more reliable than those from a single equation model. We also apply a panel VECM to distinguish between short-run and long-run causalities. Fourth and finally, it is well-known that erroneously omitted breaks can cause a deceptive inference in time-series testing and the effects of structural breaks do not disappear simply because one uses panel data. The current research makes a valuable contribution to this line of research stemming from the fact that the phenomenon of structural breaks is a common problem in macroeconomic series, given that they are usually affected by exogenous shocks in environmental or economic events (Altinay and Karagol, 2004 and Rao and Kumar, 2009). The direction, strength, and stability of the relationship among nuclear energy, oil market activities, and real income play a pivotal role in the implementation of energy or environmental policies. The remainder of this study is organized as follows. Section 2 provides the brief literature review. Section 3 introduces the panel unit-root tests, panel cointegration techniques and the causality tests. Section 4 illustrates the definitions for the variables, data sources and provides the empirical result. A conclusion is provided in Section 5.