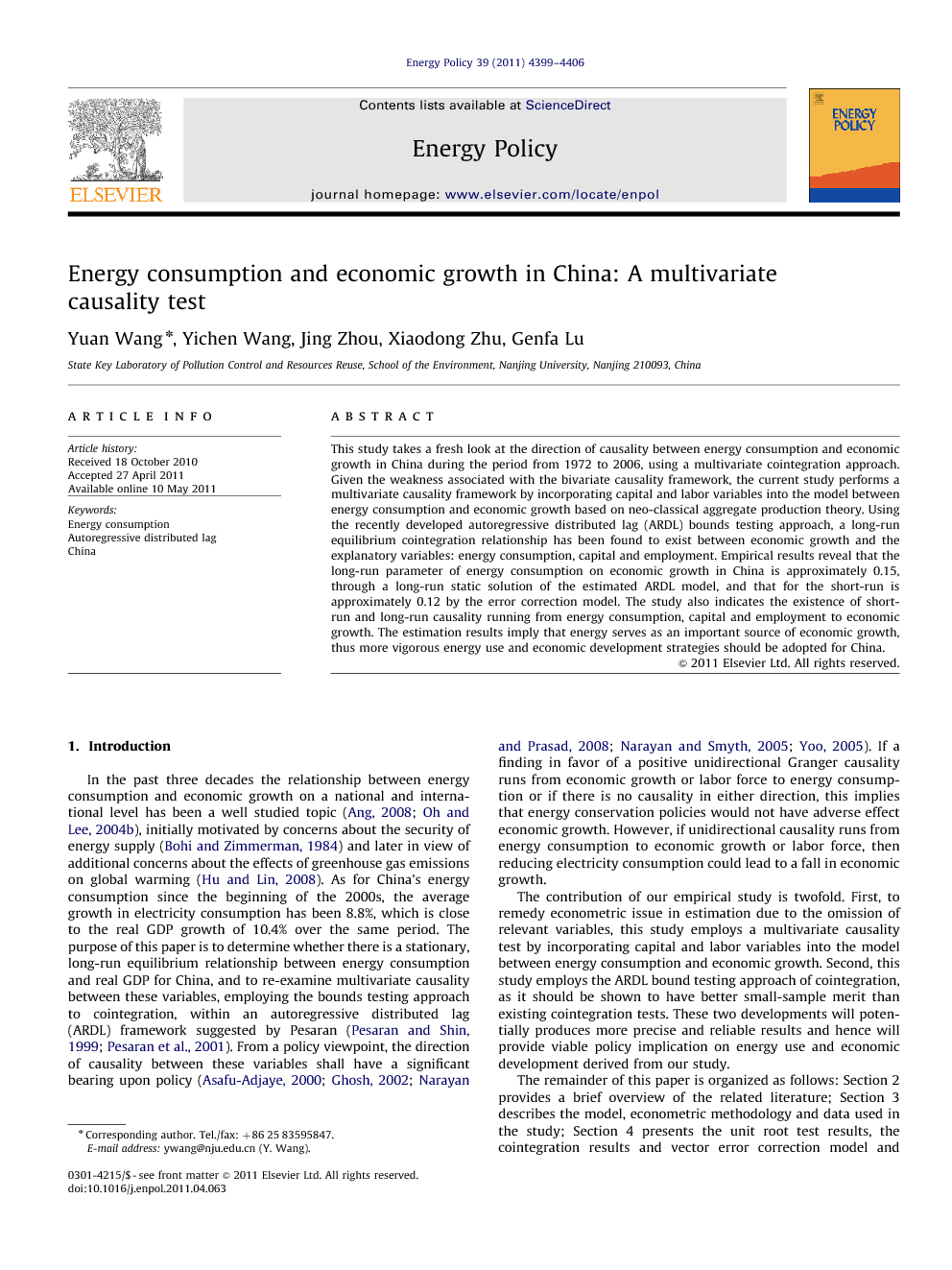 In the past three decades the relationship between energy consumption and economic growth on a national and international level has been a well studied topic (Ang, 2008 and Oh and Lee, 2004b), initially motivated by concerns about the security of energy supply (Bohi and Zimmerman, 1984) and later in view of additional concerns about the effects of greenhouse gas emissions on global warming (Hu and Lin, 2008). As for China's energy consumption since the beginning of the 2000s, the average growth in electricity consumption has been 8.8%, which is close to the real GDP growth of 10.4% over the same period. The purpose of this paper is to determine whether there is a stationary, long-run equilibrium relationship between energy consumption and real GDP for China, and to re-examine multivariate causality between these variables, employing the bounds testing approach to cointegration, within an autoregressive distributed lag (ARDL) framework suggested by Pesaran (Pesaran and Shin, 1999 and Pesaran et al., 2001). From a policy viewpoint, the direction of causality between these variables shall have a significant bearing upon policy (Asafu-Adjaye, 2000, Ghosh, 2002, Narayan and Prasad, 2008, Narayan and Smyth, 2005 and Yoo, 2005). If a finding in favor of a positive unidirectional Granger causality runs from economic growth or labor force to energy consumption or if there is no causality in either direction, this implies that energy conservation policies would not have adverse effect economic growth. However, if unidirectional causality runs from energy consumption to economic growth or labor force, then reducing electricity consumption could lead to a fall in economic growth. The contribution of our empirical study is twofold. First, to remedy econometric issue in estimation due to the omission of relevant variables, this study employs a multivariate causality test by incorporating capital and labor variables into the model between energy consumption and economic growth. Second, this study employs the ARDL bound testing approach of cointegration, as it should be shown to have better small-sample merit than existing cointegration tests. These two developments will potentially produces more precise and reliable results and hence will provide viable policy implication on energy use and economic development derived from our study. The remainder of this paper is organized as follows: Section 2 provides a brief overview of the related literature; Section 3 describes the model, econometric methodology and data used in the study; Section 4 presents the unit root test results, the cointegration results and vector error correction model and Granger causality test results, followed by policy analysis in Section 5 and finally the conclusions.