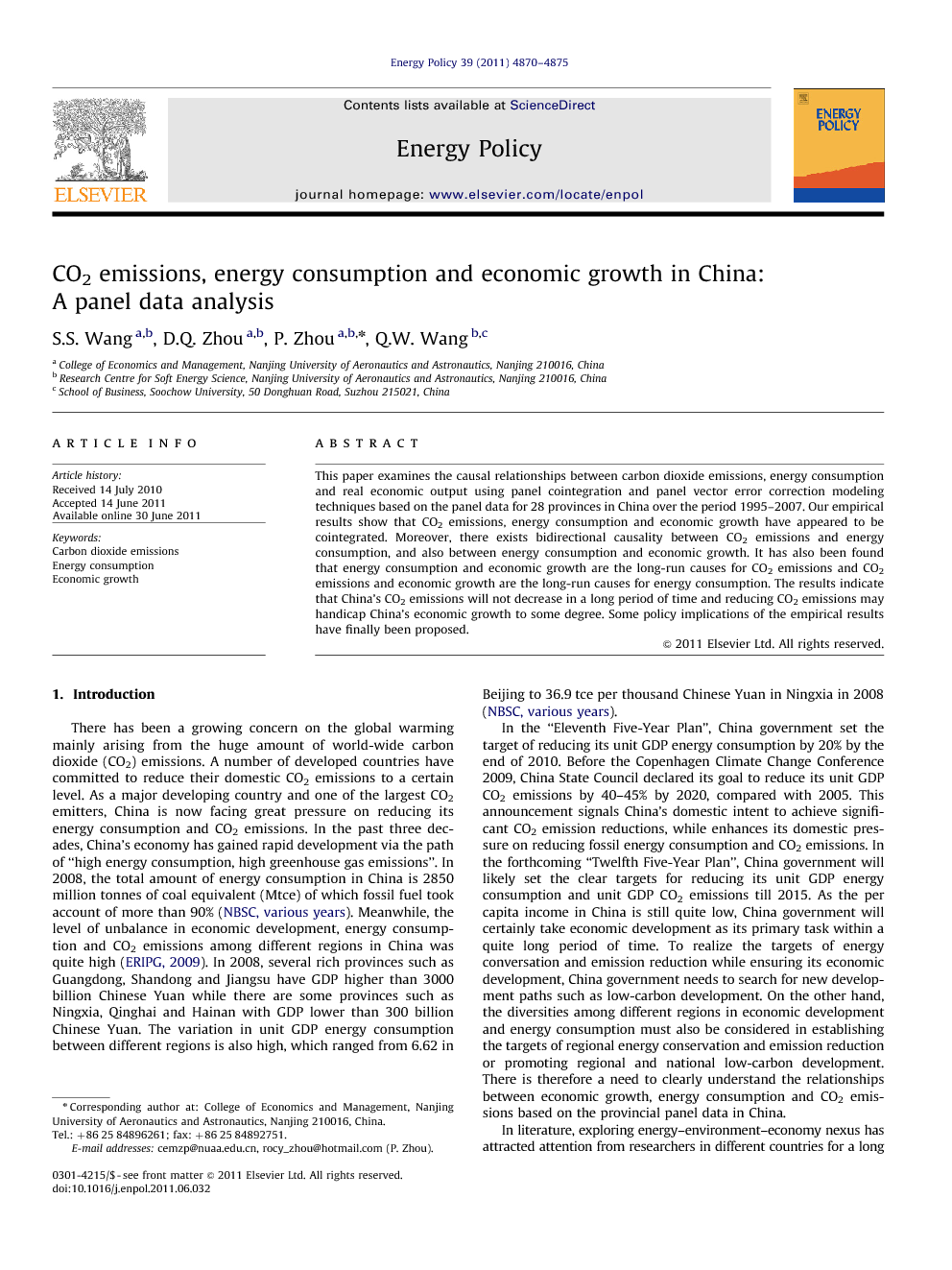 There has been a growing concern on the global warming mainly arising from the huge amount of world-wide carbon dioxide (CO2) emissions. A number of developed countries have committed to reduce their domestic CO2 emissions to a certain level. As a major developing country and one of the largest CO2 emitters, China is now facing great pressure on reducing its energy consumption and CO2 emissions. In the past three decades, China's economy has gained rapid development via the path of “high energy consumption, high greenhouse gas emissions”. In 2008, the total amount of energy consumption in China is 2850 million tonnes of coal equivalent (Mtce) of which fossil fuel took account of more than 90% (NBSC, various years). Meanwhile, the level of unbalance in economic development, energy consumption and CO2 emissions among different regions in China was quite high (ERIPG, 2009). In 2008, several rich provinces such as Guangdong, Shandong and Jiangsu have GDP higher than 3000 billion Chinese Yuan while there are some provinces such as Ningxia, Qinghai and Hainan with GDP lower than 300 billion Chinese Yuan. The variation in unit GDP energy consumption between different regions is also high, which ranged from 6.62 in Beijing to 36.9 tce per thousand Chinese Yuan in Ningxia in 2008 (NBSC, various years). In the “Eleventh Five-Year Plan”, China government set the target of reducing its unit GDP energy consumption by 20% by the end of 2010. Before the Copenhagen Climate Change Conference 2009, China State Council declared its goal to reduce its unit GDP CO2 emissions by 40–45% by 2020, compared with 2005. This announcement signals China's domestic intent to achieve significant CO2 emission reductions, while enhances its domestic pressure on reducing fossil energy consumption and CO2 emissions. In the forthcoming “Twelfth Five-Year Plan”, China government will likely set the clear targets for reducing its unit GDP energy consumption and unit GDP CO2 emissions till 2015. As the per capita income in China is still quite low, China government will certainly take economic development as its primary task within a quite long period of time. To realize the targets of energy conversation and emission reduction while ensuring its economic development, China government needs to search for new development paths such as low-carbon development. On the other hand, the diversities among different regions in economic development and energy consumption must also be considered in establishing the targets of regional energy conservation and emission reduction or promoting regional and national low-carbon development. There is therefore a need to clearly understand the relationships between economic growth, energy consumption and CO2 emissions based on the provincial panel data in China. In literature, exploring energy–environment–economy nexus has attracted attention from researchers in different countries for a long time. Roughly, past studies in this field may be divided into two lines of research (Soytas and Sari, 2009). The first focuses on the relationship between economic growth and energy consumption, which could date back to the pioneering work by Kraft and Kraft (1978). Since their study, Granger causality test approach has become a popular tool for studying the relationship between energy consumption and economic growth in different countries, e.g. Stern (1993), Aqeel and Butt (2001), Yuan et al. (2008) and Ghosh (2010). It is worth pointing out that most of the previous studies used a bivariate model to test the causality relationship, which suffered from the issue of omitted variables bias as pointed out by Stern (1993). The second line of research focuses on the relationship between economic growth and environment, which is closely related to examining the inverted U-shaped relationship between environmental pollutants and economic growth, i.e. testing the validity of environmental Kuznets curve (EKC) hypothesis.1 Researchers have carried out a large number of empirical studies in which different conclusions have been drawn. For instance, the studies by Selden and Song (1994) and Galeotti and Lanza (2005) provided empirical evidences on the validity of EKC hypothesis. However, Holtz-Eakin and Selden (1995) found a monotonic rising curve and an N-shaped curve was found by Friedl and Getzner (2003). On the other hand, Agras and Chapman (1999) and Richmond and Kaufman (2006) concluded that there is no significant relationship between economic growth and environmental pollutants. Most previous studies have shown that economic development would likely lead to changes in CO2 emissions. It has also been found that energy consumption is often a key determinant of CO2 emissions. It is therefore worthwhile to investigate the relationships between the three variables by considering them simultaneously in a modeling framework. In this line, Ang (2007), Apergis and Payne, 2009 and Apergis and Payne, 2010, Lean and Smyth (2010) and Marvão Pereira and Marvão Pereira (2010) have done some good theoretical and empirical attempts. Table 1 summarizes some earlier relevant studies with their main features including methodology employed and main findings. It can be seen from Table 1 that although several earlier studies, e.g. Zhang and Cheng (2009), Jalil and Mahmud (2009), Ang (2009) and Chang (2010), have investigated the case of China, all of them are based on the aggregate data at country level. It is therefore necessary to reexamine the relationships between CO2 emissions, energy and real economic output in China by considering the differences of various regions in economic development and energy consumption. The purpose of this study is to use China's provincial panel data to conduct such an empirical analysis using the model proposed by Ang (2007) and the novel econometric approach given by Apergis and Payne (2009). It is expected that this analysis would add new insights into the existing literature, which could be useful to help formulate and implement carbon emission reduction policies.The rest of this paper is organized as follows. Section 2 describes the model and data used in our empirical study. Section 3 provides a brief discussion of the panel unit root tests, panel cointegration procedure and panel Granger causality tests. The empirical results obtained are also presented in this section. Section 4 concludes this paper with some policy implications.