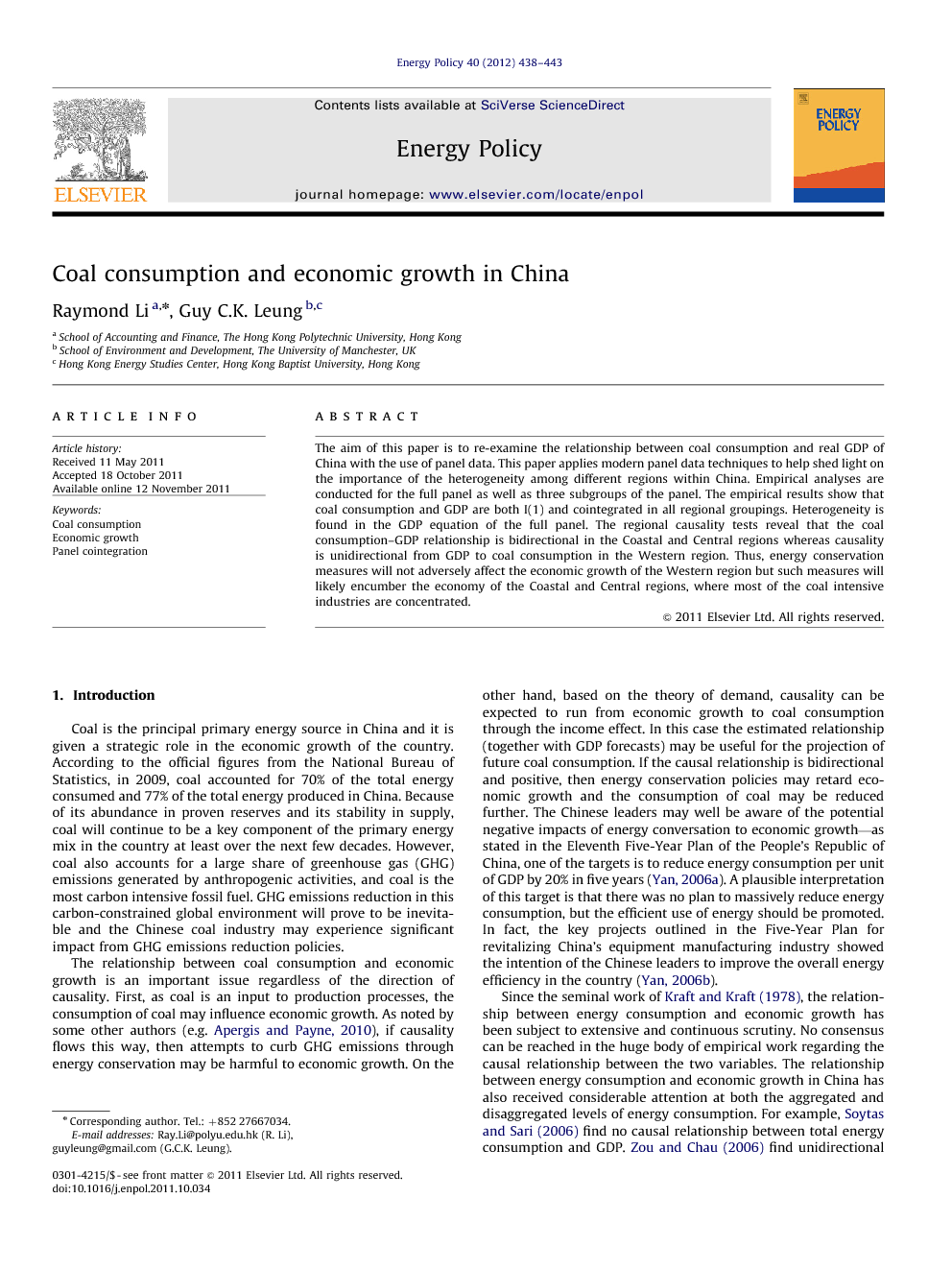 The aim of this paper is to re-examine the relationship between coal consumption and real GDP of China with the use of panel data. This paper applies modern panel data techniques to help shed light on the importance of the heterogeneity among different regions within China. Empirical analyses are conducted for the full panel as well as three subgroups of the panel. The empirical results show that coal consumption and GDP are both I(1) and cointegrated in all regional groupings. Heterogeneity is found in the GDP equation of the full panel. The regional causality tests reveal that the coal consumption–GDP relationship is bidirectional in the Coastal and Central regions whereas causality is unidirectional from GDP to coal consumption in the Western region. Thus, energy conservation measures will not adversely affect the economic growth of the Western region but such measures will likely encumber the economy of the Coastal and Central regions, where most of the coal intensive industries are concentrated.

This paper investigates the relationship between coal consumption and real GDP of China under a panel cointegration and error-correction modeling framework. Twenty three provinces of China are included in the study and the causality between the variables is examined. The empirical findings show that the variables are I(1) and cointegrated in the full panel as well as the regional groups. The causality tests indicate bidirectional causality between GDP and coal consumption in the full panel, the Coastal region and the Central region, whereas unidirectional causality from GDP to coal consumption is found in the Western region. The long-run relationship between the two variables is estimated to be positive for all three regions. The joint Hausman tests do not reject long-run homogeneity in any of the regional equations, lending support to our regional grouping based on the Seventh Five-year Plan of China. It must be noted that our causality outcomes are in agreement with our prediction in Section 2. China is a vast country with quite distinct regional characteristics. Given the differences between the Western region and the Coastal and Central regions in terms of economic development, industry structure and coal consumption pattern, it is normal for the causal relationships to differ across these regions. In particular, since coal is the principal primary energy source for the manufacturing and industrial sectors, higher coal consumption implies more activities in these sectors and these activities will ultimately lead to higher GDP. This positive relationship is confirmed by the significant long-run PMG estimated coefficients. The coal intensive manufacturing and industrial sectors are most developed in the Coastal and Central regions of China and it is natural that we find causality from coal consumption to GDP in these regions only. Employing national level time-series data, Li et al. (2008) and Wolde-Rufael (2010) both find unidirectional causality from GDP to coal consumption. Although we find bidirectional causation in the Coastal and Central regions, our results are to some extent compatible with these studies. As long as some goods in a region are produced (directly or indirectly) with the use of coal and these goods are normal goods in economic sense, a rise in GDP (or income) will be associated with a rise in coal consumption. Our income elasticity estimates support such a relationship. This positive causal relationship does not require a strong and prosperous coal intensive sector in the region. Therefore, the use of aggregated national level data should not matter substantially. Because economic growth leads to higher coal consumption, if the Chinese economy keeps growing at a high rate in the future, GHG emissions will follow and the Chinese leaders will continue to face the economic growth–emissions dilemma. As coal is the main contributor to GHG emissions in China, cutting the consumption of coal seems to be an effective way to curb GHG emissions. While attempts to restrict the use of coal may be able to reduce GHG emissions, the reduction in coal consumption may impede economic growth in the Coastal and Central regions. To avoid the possible interference with economic growth, GHG emissions reduction may be achieved by further promotion of the efficient use of coal and adoption of more advanced carbon capture technologies. These measures involve the revitalization of existing equipment and import of new technologies, which may, however, lead to a rise in the cost of coal usage and ultimately a decrease in the attractiveness of the resource. Another possibility is for China to taper off its reliance on coal and switch to lower emission fuel sources. This may lead to technological and energy security issues and so this option may not be viable in the short-run. However, the gradual diversification of energy sources may actually be able to enhance energy supply security in the long-run.