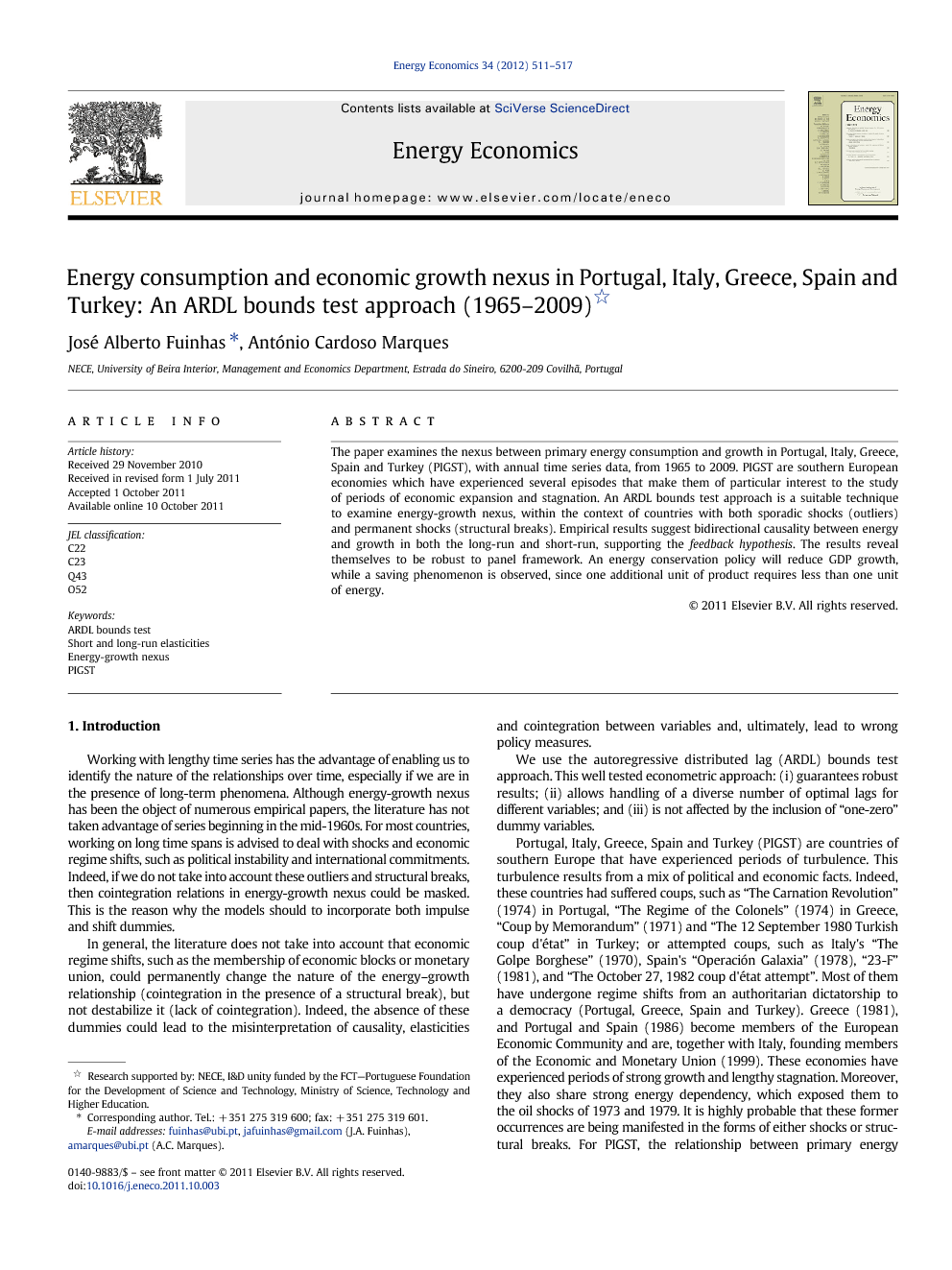 The paper examines the nexus between primary energy consumption and growth in Portugal, Italy, Greece, Spain and Turkey (PIGST), with annual time series data, from 1965 to 2009. PIGST are southern European economies which have experienced several episodes that make them of particular interest to the study of periods of economic expansion and stagnation. An ARDL bounds test approach is a suitable technique to examine energy-growth nexus, within the context of countries with both sporadic shocks (outliers) and permanent shocks (structural breaks). Empirical results suggest bidirectional causality between energy and growth in both the long-run and short-run, supporting the feedback hypothesis. The results reveal themselves to be robust to panel framework. An energy conservation policy will reduce GDP growth, while a saving phenomenon is observed, since one additional unit of product requires less than one unit of energy.

Working with lengthy time series has the advantage of enabling us to identify the nature of the relationships over time, especially if we are in the presence of long-term phenomena. Although energy-growth nexus has been the object of numerous empirical papers, the literature has not taken advantage of series beginning in the mid-1960s. For most countries, working on long time spans is advised to deal with shocks and economic regime shifts, such as political instability and international commitments. Indeed, if we do not take into account these outliers and structural breaks, then cointegration relations in energy-growth nexus could be masked. This is the reason why the models should to incorporate both impulse and shift dummies. In general, the literature does not take into account that economic regime shifts, such as the membership of economic blocks or monetary union, could permanently change the nature of the energy–growth relationship (cointegration in the presence of a structural break), but not destabilize it (lack of cointegration). Indeed, the absence of these dummies could lead to the misinterpretation of causality, elasticities and cointegration between variables and, ultimately, lead to wrong policy measures. We use the autoregressive distributed lag (ARDL) bounds test approach. This well tested econometric approach: (i) guarantees robust results; (ii) allows handling of a diverse number of optimal lags for different variables; and (iii) is not affected by the inclusion of “one-zero” dummy variables. Portugal, Italy, Greece, Spain and Turkey (PIGST) are countries of southern Europe that have experienced periods of turbulence. This turbulence results from a mix of political and economic facts. Indeed, these countries had suffered coups, such as “The Carnation Revolution” (1974) in Portugal, “The Regime of the Colonels” (1974) in Greece, “Coup by Memorandum” (1971) and “The 12 September 1980 Turkish coup d'état” in Turkey; or attempted coups, such as Italy's “The Golpe Borghese” (1970), Spain's “Operación Galaxia” (1978), “23-F” (1981), and “The October 27, 1982 coup d'état attempt”. Most of them have undergone regime shifts from an authoritarian dictatorship to a democracy (Portugal, Greece, Spain and Turkey). Greece (1981), and Portugal and Spain (1986) become members of the European Economic Community and are, together with Italy, founding members of the Economic and Monetary Union (1999). These economies have experienced periods of strong growth and lengthy stagnation. Moreover, they also share strong energy dependency, which exposed them to the oil shocks of 1973 and 1979. It is highly probable that these former occurrences are being manifested in the forms of either shocks or structural breaks. For PIGST, the relationship between primary energy consumption (hereafter energy) and economic growth (hereafter growth) has been poorly studied. Their characteristics make it interesting to focus our analysis on these countries. We innovate by exploring the potential of dummies to control for outliers and structural breaks through the use of ARDL bounds test. With impulse dummies and shift dummies, we show how it is possible and desirable to work upon distinctive characteristics of data. We assess the direction of causality, calculate the magnitude of short and long-run elasticities, and compute the cointegration equations between variables. Moreover, we add empirical evidence for a new set of countries. As a whole, results suggest that growth is highly driven by energy in PIGST, since growth appears to be elastic in both the short and long term. The variables are cointegrated. Empirical support was found for the feedback hypothesis, since we obtained two cointegrating vectors: (i) one running from primary energy consumption to growth; and (ii) the other running from growth to primary energy consumption. The remainder of the paper is organized as follows: Section 2 provides a brief review of energy-growth nexus; Section 3 describes the data, sets out the method and exposes the models; Section 4 analyzes the empirical results; Section 5 debates the robustness of the results; and Section 6 concludes.

Using the ARDL bounds test approach, with annual time series data from 1965 to 2009, the study has estimated and discussed the nexus between energy and growth in PIGST. It was found that the variables are cointegrated with two cointegrating vectors: (i) one running from energy to growth (with the exception of Turkey); and (2) the other running from growth to energy. The former result assures the presence of bidirectional causality, i.e., supports the feedback hypothesis. This hypothesis is globally reinforced by the presence of short-run and long-run elasticities, running from energy to growth and vice versa. Indeed, in PIGST, energy significantly causes growth and vice versa. The elasticities found suggest important economic policy implications for PIGST. Policy measures that constrain energy consumption slow down economic growth. When the economy grows, energy demand also increases. However, this path is energy saving, i.e., one additional unit of product requires less than one unit of energy. The ARDL bounds test approach proves to be a suitable tool to examine the nexus between growth and energy within the context of countries with both sporadic and permanent shocks. The ARDL reveals idiosyncratic sporadic and permanent shocks, i.e., there are fixed effects by country, which reinforces the adequate treatment of countries individually, namely in explaining the relationship between energy and growth.