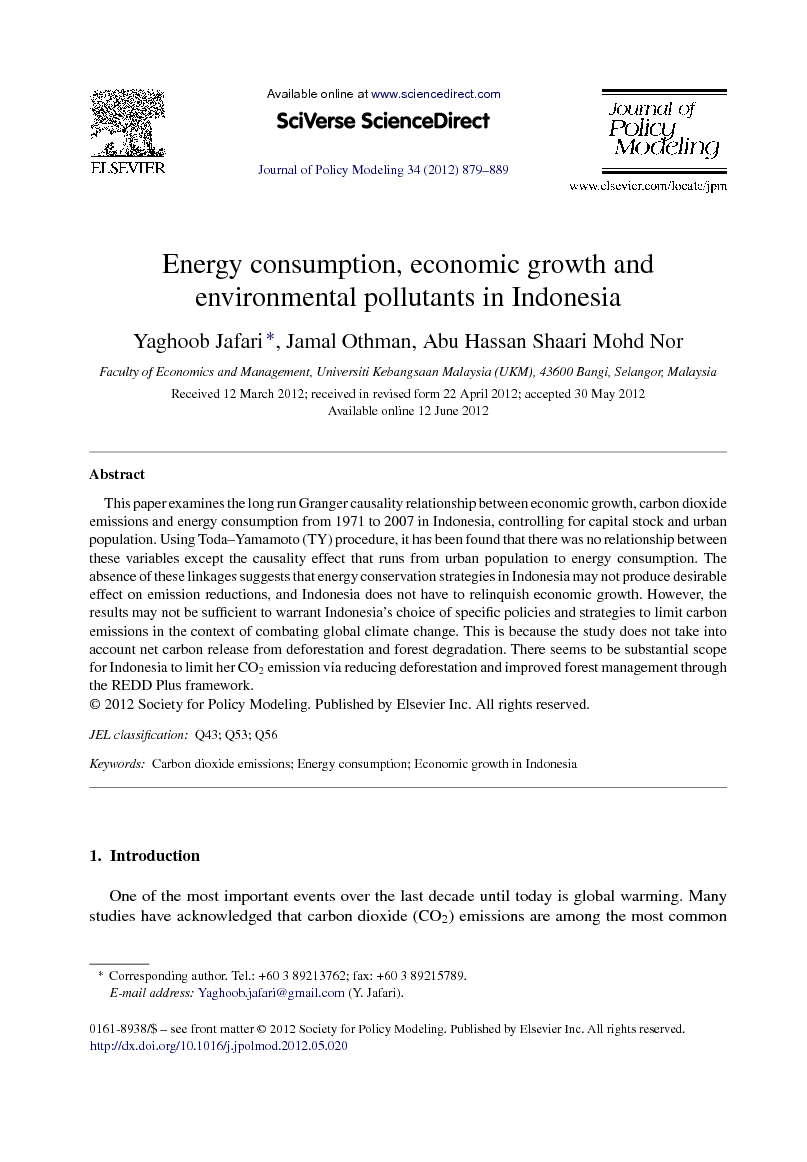 This paper examines the long run Granger causality relationship between economic growth, carbon dioxide emissions and energy consumption from 1971 to 2007 in Indonesia, controlling for capital stock and urban population. Using Toda–Yamamoto (TY) procedure, it has been found that there was no relationship between these variables except the causality effect that runs from urban population to energy consumption. The absence of these linkages suggests that energy conservation strategies in Indonesia may not produce desirable effect on emission reductions, and Indonesia does not have to relinquish economic growth. However, the results may not be sufficient to warrant Indonesia's choice of specific policies and strategies to limit carbon emissions in the context of combating global climate change. This is because the study does not take into account net carbon release from deforestation and forest degradation. There seems to be substantial scope for Indonesia to limit her CO2 emission via reducing deforestation and improved forest management through the REDD Plus framework.

One of the most important events over the last decade until today is global warming. Many studies have acknowledged that carbon dioxide (CO2) emissions are among the most common and greatest factors contributing to global warming (IPCC, 1996). Consumptions of conventional fuel, including crude oil, natural gas and coal stand for the largest portion (56.6%) of Green House Gases (GHGs) emitted to the atmosphere (IPCC, 1996). International organizations, especially the United Nation-based institutions have strived to reduce the amount of global warming substances. This is especially done through the binding and intergovernmental agreements known as the Kyoto Protocol (see Halicioglu, 2009). Indonesia has been the first large developing nation and the third top producer of green house gases to ratify the protocol, thus committing herself to reduce GHG emissions. The country announced her target of GHG emissions reduction about 26–41% below the Business as Usual (BAU) scenario with a targeted economic growth rate of 7% by 2020 (Copenhagen Accord, 2009). An important aim of Indonesia's national energy policies has been to reduce the domestic fossil-based energy consumption (National Council on Climate Change, 2009). The Indonesian government believes that reducing the energy consumption may promote the sustainable development efforts and energy security programme without causing a decline in economic growth rate. However, it is not clear whether reducing energy consumption by itself can be a solution to the environmental degradation problem. Furthermore, if energy consumption and economic growth were truly intertwined, energy consumption reduction may in fact hinders economic growth. Additionally, considering the targeted economic growth rate of 7% through 2020, the vital question is that is it possible to have sustained growth in the long run without accumulation of pollution? In particular, if economic growth causes CO2 emission then growth policies could lead to a degradation in environmental quality. However, depending on the nature of the long run relationship between CO2 emissions, economic growth, and energy consumption in different economies, countries may resort to different policy options in contributing to the fight against global warming (Soytas and Sari, 2006a and Soytas and Sari, 2006b). This paper attempts to shed more light on the energy consumption, carbon emissions and economic growth relations in Indonesia that may provide more information to the policy makers in the country in choosing from a variety of policy options in line with the Kyoto Protocol and its potential successor, the REDD Plus framework. Indonesia appears to be an interesting case study given that it is the third top producer of green house gases as of 2007 (WBI, 2010). In recent years, Indonesia's carbon emissions have grown exponentially. The amount of CO2 emission over the 1971–2007 period has increased by 919%, while the amount of fossil fuel consumption has increased at a much slower pace of some 430% (calculated based on WBI, 2010). The choice of Indonesia is also motivated by the fact that there have been no specific studies on Indonesia that have employed advanced techniques to link energy consumption, CO2 emissions and economic growth in a coherent framework. Well acknowledging Indonesia's commitment to limit the rise in global temperature via CO2 reductions while establishing relevant national policies that safeguards their interest, the purpose of this paper is to investigate the relationship between Indonesia's economic growth, energy consumption and pollutant emissions in a multivariate framework controlling for other crucial variables such as urban population and capital stock.

It has been shown in our empirical work that Indonesia's economic growth, CO2 emissions and energy consumption have no causality effects on each other. The results seem to imply that energy conservation strategies in Indonesia may not lead to significant emission reductions, and the country may be able to enjoy double dividends – achieving both economic growth and environmental protection simultaneously. Nevertheless, the econometric results may not be sufficient to warrant Indonesia's choice of specific policies and strategies to limit carbon emissions in the context of combating global climate change. This is especially because the study only accounted for CO2 emission that emanated from conventional industrial processes and energy use, while disregarding net carbon release from deforestation, forest degradation and peat swamp conversion. There seem to be more scope for Indonesia to limit her CO2 emission via the REDD Plus frameworks which calls for reduction in emissions through reduced forest conversion and degradation as well as through better forest management strategies. Based on the causality framework using a linear logarithmic specification, this study has demonstrated that the EKC hypothesis may not apply to Indonesia, if one would consider CO2 emissions from conventional sources as an appropriate representation of environmental pollutants. It will be highly beneficial for future work to look into the same policy issue but taking into account all sources of CO2 emissions in Indonesia, including deforestation, forest degradation and peat swamp conversion into agricultural areas.