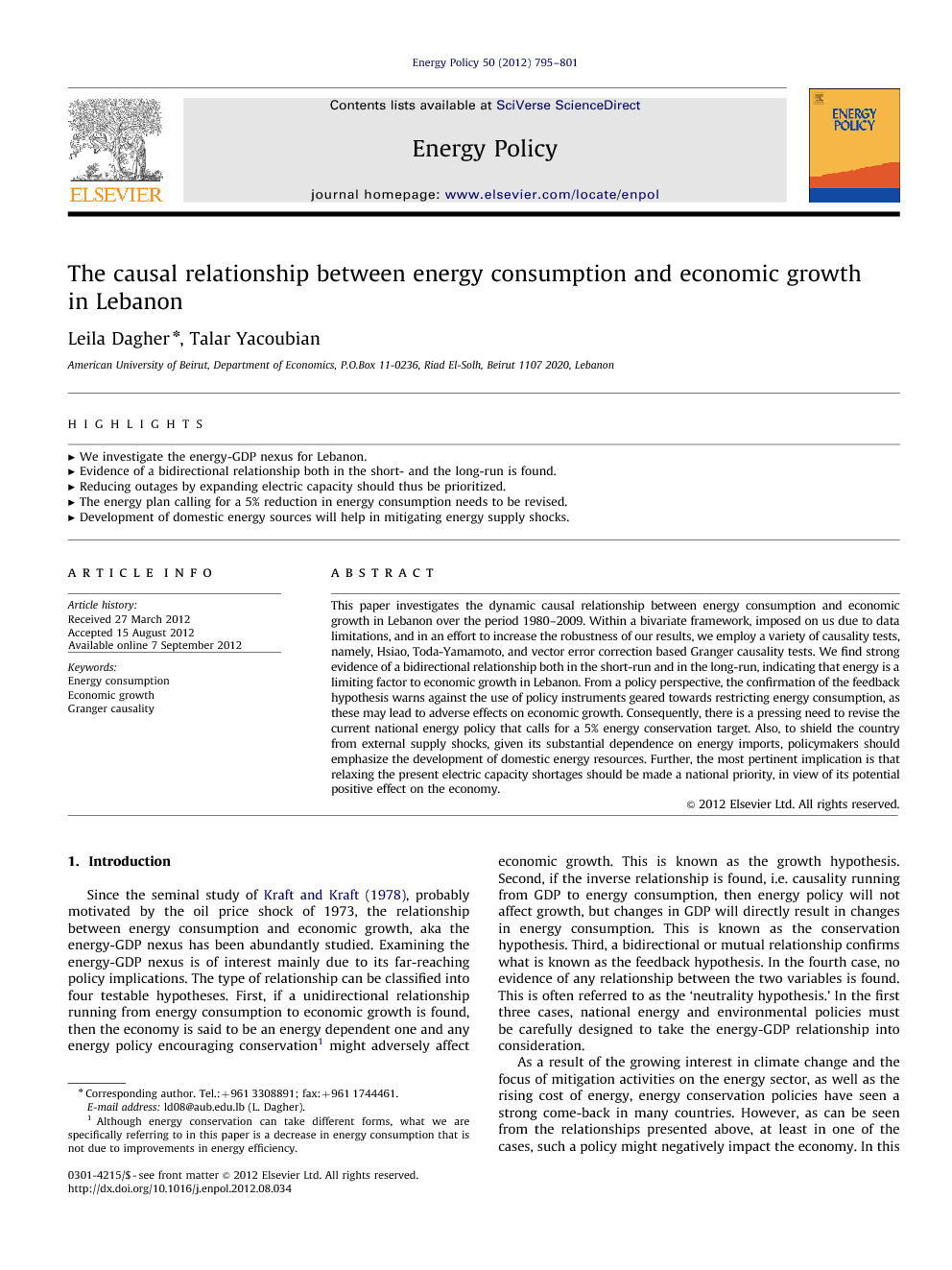 This paper investigates the dynamic causal relationship between energy consumption and economic growth in Lebanon over the period 1980–2009. Within a bivariate framework, imposed on us due to data limitations, and in an effort to increase the robustness of our results, we employ a variety of causality tests, namely, Hsiao, Toda-Yamamoto, and vector error correction based Granger causality tests. We find strong evidence of a bidirectional relationship both in the short-run and in the long-run, indicating that energy is a limiting factor to economic growth in Lebanon. From a policy perspective, the confirmation of the feedback hypothesis warns against the use of policy instruments geared towards restricting energy consumption, as these may lead to adverse effects on economic growth. Consequently, there is a pressing need to revise the current national energy policy that calls for a 5% energy conservation target. Also, to shield the country from external supply shocks, given its substantial dependence on energy imports, policymakers should emphasize the development of domestic energy resources. Further, the most pertinent implication is that relaxing the present electric capacity shortages should be made a national priority, in view of its potential positive effect on the economy.

Since the seminal study of Kraft and Kraft (1978), probably motivated by the oil price shock of 1973, the relationship between energy consumption and economic growth, aka the energy-GDP nexus has been abundantly studied. Examining the energy-GDP nexus is of interest mainly due to its far-reaching policy implications. The type of relationship can be classified into four testable hypotheses. First, if a unidirectional relationship running from energy consumption to economic growth is found, then the economy is said to be an energy dependent one and any energy policy encouraging conservation1 might adversely affect economic growth. This is known as the growth hypothesis. Second, if the inverse relationship is found, i.e. causality running from GDP to energy consumption, then energy policy will not affect growth, but changes in GDP will directly result in changes in energy consumption. This is known as the conservation hypothesis. Third, a bidirectional or mutual relationship confirms what is known as the feedback hypothesis. In the fourth case, no evidence of any relationship between the two variables is found. This is often referred to as the ‘neutrality hypothesis.’ In the first three cases, national energy and environmental policies must be carefully designed to take the energy-GDP relationship into consideration. As a result of the growing interest in climate change and the focus of mitigation activities on the energy sector, as well as the rising cost of energy, energy conservation policies have seen a strong come-back in many countries. However, as can be seen from the relationships presented above, at least in one of the cases, such a policy might negatively impact the economy. In this paper, we examine the case of Lebanon for several reasons. First, in spite of the abundance of studies in this field, none has examined the energy-GDP relationship for Lebanon. One study looked at the electricity-GDP relationship and found evidence supportive of the growth hypothesis (Abosedra et al., 2009). A major drawback of this study is that the authors apply the standard Granger causality tests without explicitly testing for the stationarity of the employed variables. Second, electricity consumers in Lebanon experience extensive power rationing. If our findings support the growth hypothesis, then this rationing would be harming the economy and eliminating or at least reducing the power outages should be high on the national agenda. Third, the country is vastly dependent on imported energy. If evidence of an energy-dependent economy is found, then the economy would be highly sensitive to external energy shocks, and policymakers should hence prioritize the development of domestic energy resources. Finally, the Lebanese government has recently (and for the first time) set a 5% energy conservation target as part of its energy policy (Ministry of Energy and Water (MEW) Lebanese Republic, 2010). Consequently, the type of relationship between energy consumption and GDP is of critical importance, since if this relationship runs from energy consumption to GDP then such a policy might have a negative impact on GDP growth. This study, by shedding some light on the role of energy consumption in economic development, aims at providing insights into the above-mentioned issues that can serve as a basis for future energy and environmental policies. The remainder of the paper is structured as follows. Section 2 provides a brief review of the literature. In Section 3 we present an overview of the energy sector and the economy in Lebanon, highlighting the country’s particularities. Section 4 outlines the model and econometric methodology employed, followed by a presentation and discussion of the results in Section 5. Finally, in Section 6, we offer some concluding remarks on the results and some policy implications.

The aim of this paper is to investigate the existence and direction of the causal linkages between energy consumption and economic growth in Lebanon using time series data for the period 1980–2009. We employ a bivariate model and subject it to a battery of causality tests, namely, Hsiao, TY, and Granger causality on a VECM. We find strong evidence of a bidirectional relationship both in the SR and in the LR. Thus, we may conclude based on our findings that energy is a limiting factor to economic growth in Lebanon. This identified relationship should help policymakers in designing effective energy and environmental policies both in the short- and long-run. From a policy perspective, the confirmation of the feedback hypothesis warns against the use of policy instruments geared towards restricting energy consumption, as these may lead to adverse effects on economic growth. Given these results, the current national energy plan seems inadequate since it calls for a 5% reduction in energy consumption. Emphasis should be mainly placed on supply side options and energy efficiency improvements rather than on such energy limiting policies. Some currently used demand side management activities by various utilities around the world could be very useful for Lebanon such as the transition from incandescent to compact fluorescent lighting, while others such as the ‘load control’ programs, where utilities can cycle (or even turn off) consumers’ air conditioners during periods of peak demand, could hurt the economy. Given Lebanon’s extensive dependence on imports for the satisfaction of its energy needs, any supply shock will negatively affect development. To enhance security of supply, Lebanon’s energy policies should focus on diminishing the country’s dependence on external energy sources. The government should thus prioritize the development of domestic energy sources such as the expansion of its hydroelectric power capacity, promoting wind, solar, and geothermal energy, and last but not least push forward in its offshore exploration of natural gas. What exacerbates Lebanon’s sensitivity to external oil shocks is the non-stationarity of its energy consumption. Given its importance to the economy, any shock to energy consumption would be transmitted to different sectors in the economy, which would as a result inherit the non-stationarity (Apergis and Payne, 2010 and Narayan and Smyth, 2007). Further, the most pertinent implication is that relaxing the present electric capacity shortages should be made a national priority, in view of its potential positive effect on the economy. Currently, growth prospects are being hampered by intensive electricity outages and heavy technical losses. Investing in new capacity to relax the electricity supply constraints and reducing the losses can further stimulate economic growth. In addition, any new capacity coming online will immensely increase the supply efficiency, especially that it will be replacing the older less efficient backup generators. This, in turn, could help curb the demand without having any negative effects on the GDP. Moreover, the supply constraint problem is exacerbated by the finding that GDP also granger causes energy consumption, In a rapidly growing economy such as Lebanon, the implication of this finding is that the currently observed high economic growth will lead to a high growth in energy consumption. Consequently, it is critical to meet energy demand if we want to sustain the current growth momentum. Bivariate models have been repeatedly criticized, because in such an omitted variables setting there is a tendency to under-reject the null of no Granger causality (Lütkepohl, 1982), i.e. it is likely in such a setting not to find any causal relationships. Fortunately, this was not the case in the present study. However, we have to admit that the analysis performed, being constrained by data unavailability, may suffer from other limitations. For instance, we could not discuss the resulting signs and magnitudes of the estimated coefficients, because these are known to be biased and inconsistent as a result of the omitted variables. The energy-GDP relationship for most countries has been abundantly studied, however, for Lebanon there exists only one study that examines the electricity-GDP relationship. Abosedra et al. (2009) find evidence supportive of the growth hypothesis. A major drawback of this study is that the authors apply the standard Granger causality tests without explicitly testing the stationarity of the employed variables. It is very likely that the unavailability of data was the main reason for excluding Lebanon from large panel studies especially when these are conducted within a multivariate framework (see inter alia, Apergis and Payne, 2011 and Costantini and Martini, 2010). Our results seem to be in accordance with the findings of Apergis and Payne (2011) that for the panel of upper middle-income countries there was evidence in support of the feedback hypothesis both in the short- and long-run. Future research examining Lebanon in a regional panel framework may provide additional insights regarding the impact of oil resources on the relationship between energy consumption and GDP. A few studies have examined the effect of different stages of economic development on the energy-GDP nexus, but to our knowledge no study has looked at countries in the MENA region in an effort to find out if the energy-GDP relationship depends on whether a country is a net oil exporter or net oil importer.