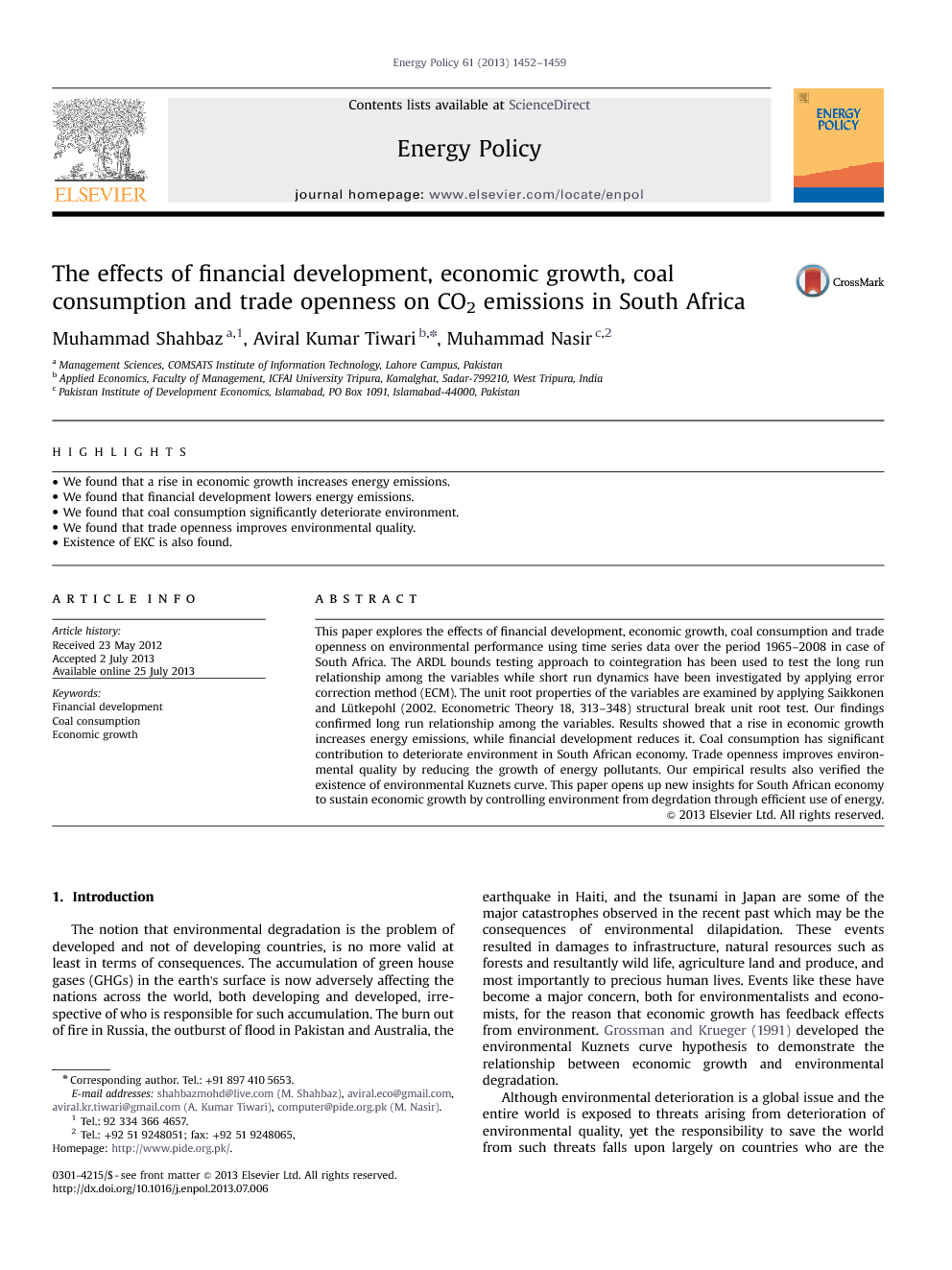 This paper explores the effects of financial development, economic growth, coal consumption and trade openness on environmental performance using time series data over the period 1965–2008 in case of South Africa. The ARDL bounds testing approach to cointegration has been used to test the long run relationship among the variables while short run dynamics have been investigated by applying error correction method (ECM). The unit root properties of the variables are examined by applying Saikkonen and Lütkepohl (2002. Econometric Theory 18, 313–348) structural break unit root test. Our findings confirmed long run relationship among the variables. Results showed that a rise in economic growth increases energy emissions, while financial development reduces it. Coal consumption has significant contribution to deteriorate environment in South African economy. Trade openness improves environmental quality by reducing the growth of energy pollutants. Our empirical results also verified the existence of environmental Kuznets curve. This paper opens up new insights for South African economy to sustain economic growth by controlling environment from degrdation through efficient use of energy.

The notion that environmental degradation is the problem of developed and not of developing countries, is no more valid at least in terms of consequences. The accumulation of green house gases (GHGs) in the earth's surface is now adversely affecting the nations across the world, both developing and developed, irrespective of who is responsible for such accumulation. The burn out of fire in Russia, the outburst of flood in Pakistan and Australia, the earthquake in Haiti, and the tsunami in Japan are some of the major catastrophes observed in the recent past which may be the consequences of environmental dilapidation. These events resulted in damages to infrastructure, natural resources such as forests and resultantly wild life, agriculture land and produce, and most importantly to precious human lives. Events like these have become a major concern, both for environmentalists and economists, for the reason that economic growth has feedback effects from environment. Grossman and Krueger (1991) developed the environmental Kuznets curve hypothesis to demonstrate the relationship between economic growth and environmental degradation. Although environmental deterioration is a global issue and the entire world is exposed to threats arising from deterioration of environmental quality, yet the responsibility to save the world from such threats falls upon largely on countries who are the major emitters of GHGs. One of the most prominent GHG is carbon dioxide and its major emitters include China, USA, India, OECD group, Russia and Brazil (World Bank, 2007). The success of international efforts to reduce world CO2 emissions heavily depends on the commitment of these major emitters. However, difficulties arise for countries when the CO2 emissions are related to energy production because energy works as an engine of economic growth. In such cases, curbing carbon dioxide emissions would mean to ultimately retard their economic growth, for which the countries are very reluctant to accomplish. This calls for digging out the ways through which the twin objectives of higher economic growth and lower CO2 emissions can be achieved. Financial development is one of the ways that could help to accomplish these objectives. South Africa is a classic case of what has been discussed above. It contains all the contents such as high growth, monstrous energy-related emissions and strong financial base. Soon after the advent of democracy in 1994, the country's economic growth shows an upward trend and remained uninterrupted until the financial crises that hit the country in 2007. The average economic growth rate between 2001 and 2007 was 4.3%. On the other hand, South Africa is one of the major emitter of CO2 (1% of the world emissions). The obvious reason for this is the use of coal, a major ingredient of CO2, in energy production. South Africa had coal reserves of 30408 million tones at the end of 2009 that constitutes 3.68% of the world coal reserves.3 Almost 77% of the country's primary energy needs are provided by coal whereas 53% of the coal reserves are used in electricity generation, 33% in petrochemical industries, 12% in metallurgical industries, and 2% in domestic heating and cooking. Similarly, financial system in South Africa is highly developed with banking regulations rank outstanding, and the financial sector has long been rated among the top 10 financial sectors of the globe. These characteristics make South Africa a compelling candidate for a separate study to investigate the presence of environmental Kuznets curve (EKC) in the country and to assess the effects economic growth, financial development and coal consumption on the CO2 emissions in presence of trade openness. Indeed, the study in hands is the first attempt to incorporate coal as separate determinant of CO2 emissions in the analysis. Rest of the study is organized as follow: Section 2 gives a brief literature review. The third section talks about data and methodology used in the study. Section 4 discusses the results in detail while Section 5 concludes the study with some policy implications.

South Africa is a classic case and contains all the contents such as high growth, monstrous energy-related emissions, and strong financial base. Soon after the advent of democracy in 1994, the country economic growth shows an upward trend and remained uninterrupted until the financial crises hit the country in 2007. The average growth rate between 2001 and 2007 was 4.3%. Nonetheless, the essential feature was the continuous rise in the growth rate during this period. On the other hand, South Africa is one of the major emitter of CO2 (1% of the world emissions). The obvious reason for this is the use of coal, a major ingredient of CO2, in energy production. Coal consumption is major contributor of environmental degradation. The study examined the effect of financial development on energy pollutants in the presence of coal consumption and trade openness. Our empirical exercise pointed out that rise in financial development is linked with environmental quality i.e. financial development lowers energy pollutants. Particularly, we find that banking sector development that is per capita access to domestic credit of private sector help to achieve lower CO2 per capita emissions. This implies that financial development can be used as an instrument to keep the environment clean by introducing financial reforms. Coal consumption has major contribution in deteriorating the environmental quality while trade openness improves it. Furthermore, our results confirmed the existence of environmental Kuznets curve (EKC) in case of South Africa and urbanization also deteriorates the environmental quality. In this regard, the government can help the markets by establishing a strong policy framework that creates long-term value for green house gas emissions reductions and consistently supports the development of new technologies that leads to a less carbon-intensive economy. In addition to this, development of efficient capital market might be another useful policy option that can be adopted. This is because firms can reduce the liquidity risk which can mobilize the required funds through portfolio diversification that is extremely useful in developing sound technology base in the long run particularly. Another, interesting observation of our finding is that policies directed to financial openness and liberalization to attract higher levels of R&D related foreign direct investment can decrease the environmental degradation as our evidence show that trade openness reduces environmental degradation. This is important because the higher degree of economic and financial openness strengthens the institutional framework creating incentives for the firms to act upon. Therefore, addressing these issues might lead to higher energy efficiencies through technological advances as suggested by Blanford (2009) and possibly reduce the CO2 emissions in South Africa. Furthermore, we argue with respect to financial development and environment degradation that higher degree of financial system development and trade openness prop up technological innovations by increasing spending on energy conservation R&D which results in energy efficiency and hence it may lower emissions. However, our study is limited to not to provide the analysis at disaggregate i.e., at the firm level in that one might answer how financial development/development of well-established capital market can improve the environment performance or how openness polices can motivate firms to use environment friendly and more efficient technologies.