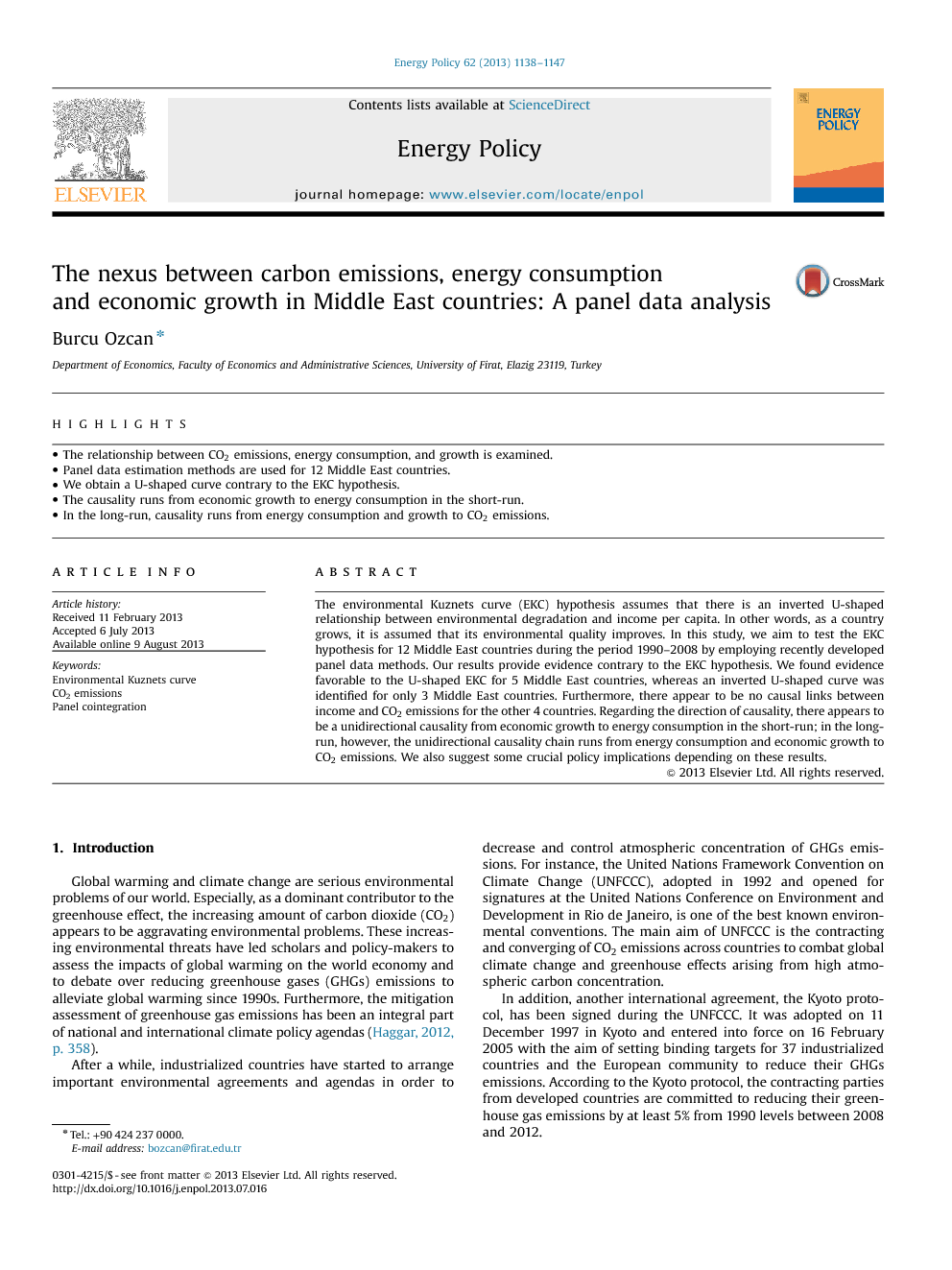 The environmental Kuznets curve (EKC) hypothesis assumes that there is an inverted U-shaped relationship between environmental degradation and income per capita. In other words, as a country grows, it is assumed that its environmental quality improves. In this study, we aim to test the EKC hypothesis for 12 Middle East countries during the period 1990–2008 by employing recently developed panel data methods. Our results provide evidence contrary to the EKC hypothesis. We found evidence favorable to the U-shaped EKC for 5 Middle East countries, whereas an inverted U-shaped curve was identified for only 3 Middle East countries. Furthermore, there appear to be no causal links between income and CO2CO2 emissions for the other 4 countries. Regarding the direction of causality, there appears to be a unidirectional causality from economic growth to energy consumption in the short-run; in the long-run, however, the unidirectional causality chain runs from energy consumption and economic growth to CO2CO2 emissions. We also suggest some crucial policy implications depending on these results.

In this study, we aimed to test the EKC hypothesis for 12 Middle East countries over the period 1990–2008 by employing recently developed panel data methods. We took cross-sectional dependence and slope homogeneity issues into account in our estimation procedure. For that purpose, we first analyzed the integration orders of variables of interest using Smith et al.'s (2004) panel unit root tests that allow for cross-sectional dependence and slope heterogeneity. Having established that all variables are integrated of order one, we examined whether CO2CO2 emissions, energy consumption, real GDP, and squared real GDP are cointegrated or not. Next, based on the presence of a long-run relationship, we estimated cointegrating vector (long-run parameters) employing the FMOLS estimator of Pedroni (2000). The results of the panel FMOLS estimator provided evidence in support of a U-shaped relationship between CO2CO2 emissions and real income, contrary to the EKC hypothesis. Hence, it could be stated that CO2CO2 emissions decrease with economic growth, stabilize, and then increase. Furthermore, we also reported the country-based FMOLS results under the presence of slope heterogeneity. The individual results provided evidence favorable to the U-shaped curves for 5 Middle East countries, namely Bahrain, Syria, Turkey, Oman, and Yemen. In addition, there appear to be inverted U-shaped EKCs for UAE, Egypt, and Lebanon whereas there is no significant relationship between CO2CO2 emissions and real output for the other 4 Middle East countries. To define the direction of long-run and short-run causalities, we estimated a panel error correction model. The results from error correction model indicated the presence of a short-run unidirectional causality running from economic growth to energy consumption. In other words, economic growth leads to increases in energy consumption. However, there appears no feedback effect from energy consumption to economic growth. Thus, this finding indicates that energy conservation policies, such as rationing energy consumption and controlling CO2CO2 emissions, are likely to have no adverse effect on the real output growth of Middle East countries considered in this study (Acaravci and Ozturk, 2010). In addition, in the long-run, there seems only a unidirectional causal link from energy consumption and real output growth to CO2CO2 emissions. This result implies that energy conservation policies may be efficient in reducing the rate of pollutant emissions in the long-run. Also, as a long-term development policy, Middle East countries need to arrange sustainable growth policies aiming to contract the emissions rate of pollutants.