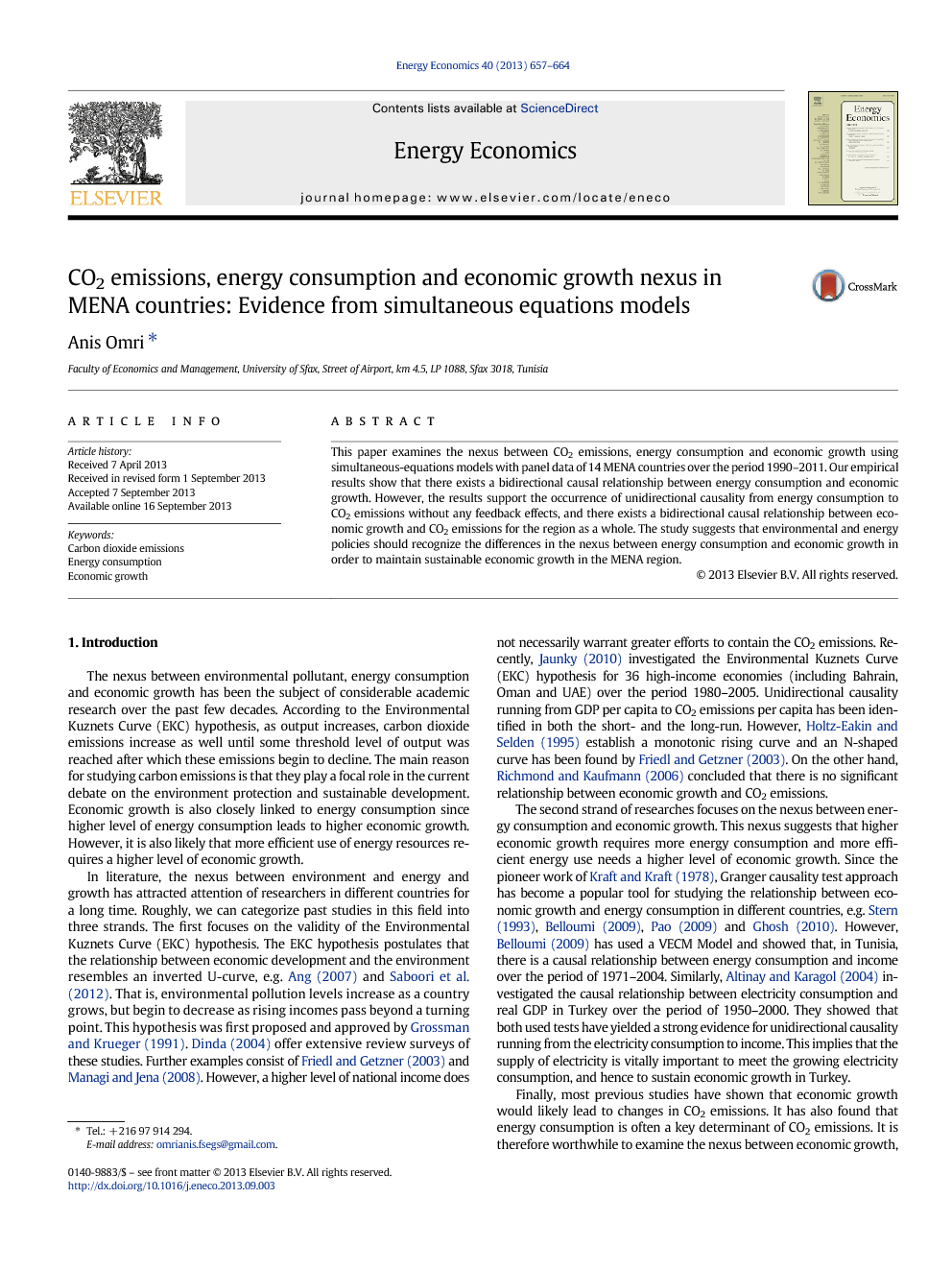 The present study investigates the three-way linkages between CO2 emissions, energy consumption and economic growth using the Cobb–Douglas production function. While the literature on the causality links between emissions–energy–growth has increased over the last few years, there is no study that examines this interrelationship via the simultaneous-equations models. The objective of the present study is to fill this research gap by examining the above interaction for 14 MENA countries over the period 1990–2011. Our results suggest that energy consumption enhances economic growth. We found a bidirectional causal relationship between the two series. Our results significantly reject the neo-classical assumption that energy is neutral for growth. This pattern is similar to the findings of Oh and Lee, 2004 and Mahadevan and Asafu-Adjaye, 2007, Ang (2008), and Apergis and Payne (2009). Thus, we conclude that energy is a determinant factor of the GDP growth in these countries, and, therefore, a high-level of economic growth leads to a high level of energy demand and vice versa. As such, it is important to take into account their possible negative effects on economic growth in establishing energy conservation policies. Our empirical results also show that there is a unidirectional causal relationship from energy consumption to carbon dioxide emissions without feedback. This implies that due to the expansion of production, the countries are consuming more energy, which puts pressure on the environment leading to more emissions. Hence, it is very essential to apply some sorts of pollution control actions to the whole panel regarding energy consumption. It is found that bidirectional causality between economic growth and CO2 emissions implies that degradation of the environment has a causal impact on economic growth, and a persistent decline in environmental quality may exert a negative externality to the economy through affecting human health, and thereby it may reduce productivity in the long run. The main policy implications emerging from our study is as follows. First, these countries need to embrace more energy conservation policies to reduce CO2 emissions and consider strict environmental and energy policies. The research and investment in clean energy should be an integral part of the process of controlling the carbon dioxide emissions and find sources of energy to oil alternative. These countries can use solar energy as the substitute of oil. Thus, implementing the environmental and energy policies and also reconsidering the strict energy policies can control carbon dioxide emissions. As a result, our environment will be free from pollution and millions of peoples can protect them-selves from the effects of natural disasters. Second, high economic growth gives rise to environmental degrading but the reduction in economic growth will increase unemployment. The policies with which to tackle environmental pollutants require the identification of some priorities to reduce the initial costs and efficiency of investments. Reducing energy demand, increasing both energy supply investment and energy efficiency can be initiated with no damaging impact on the MENA's economic growth and therefore reduce emissions. At the same time, efforts must be made to encourage industries to adopt new technologies to minimize pollution. Finally, given the generous subsidies for energy in the exporting countries, there is a relatively more scope for more drastic energy conservation measures without severe impacts on economic growth in these countries. Indeed, it is unlikely that the elimination of energy price distortions restrain economic growth in the oil exporting countries. However, subsidy reform should be embedded in a reform program that engenders broad support and yield widespread benefits.