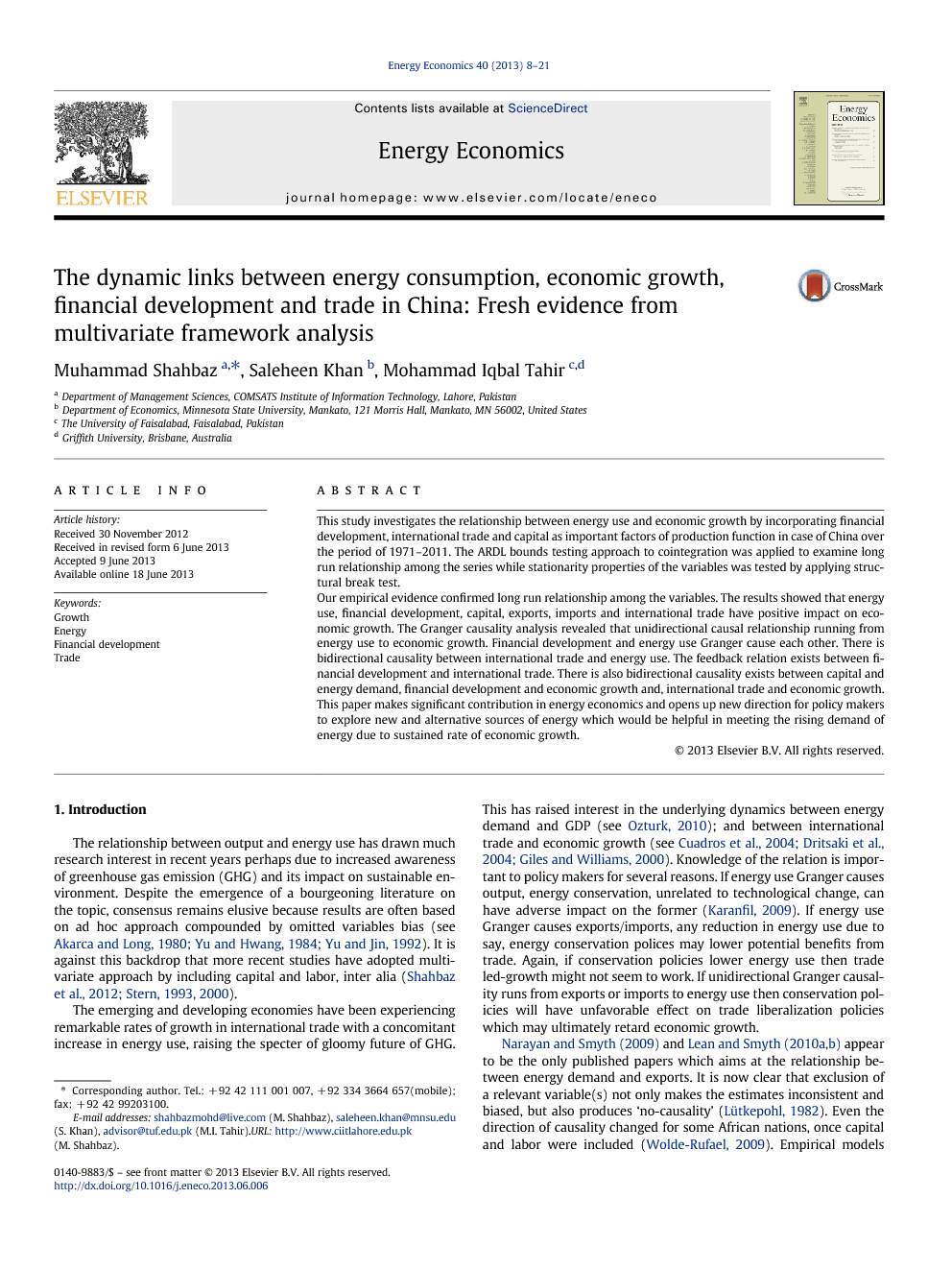 The relationship between output and energy use has drawn much research interest in recent years perhaps due to increased awareness of greenhouse gas emission (GHG) and its impact on sustainable environment. Despite the emergence of a bourgeoning literature on the topic, consensus remains elusive because results are often based on ad hoc approach compounded by omitted variables bias (see Akarca and Long, 1980, Yu and Hwang, 1984 and Yu and Jin, 1992). It is against this backdrop that more recent studies have adopted multivariate approach by including capital and labor, inter alia (Shahbaz et al., 2012, Stern, 1993 and Stern, 2000). The emerging and developing economies have been experiencing remarkable rates of growth in international trade with a concomitant increase in energy use, raising the specter of gloomy future of GHG. This has raised interest in the underlying dynamics between energy demand and GDP (see Ozturk, 2010); and between international trade and economic growth (see Cuadros et al., 2004, Dritsaki et al., 2004 and Giles and Williams, 2000). Knowledge of the relation is important to policy makers for several reasons. If energy use Granger causes output, energy conservation, unrelated to technological change, can have adverse impact on the former (Karanfil, 2009). If energy use Granger causes exports/imports, any reduction in energy use due to say, energy conservation polices may lower potential benefits from trade. Again, if conservation policies lower energy use then trade led-growth might not seem to work. If unidirectional Granger causality runs from exports or imports to energy use then conservation policies will have unfavorable effect on trade liberalization policies which may ultimately retard economic growth. Narayan and Smyth (2009) and Lean and Smyth, 2010a and Lean and Smyth, 2010b appear to be the only published papers which aims at the relationship between energy demand and exports. It is now clear that exclusion of a relevant variable(s) not only makes the estimates inconsistent and biased, but also produces ‘no-causality’ (Lütkepohl, 1982). Even the direction of causality changed for some African nations, once capital and labor were included (Wolde-Rufael, 2009). Empirical models that are grounded in sound theory produce better outcomes. Contemporary research also shows that the financial development directly impacts energy use and productivity (Shahbaz, 2012 and Shahbaz and Lean, 2012b). Thus, inclusion of both financial development and trade along with labor and capital appears well justified on theoretical grounds. The framework used here is based on a conventional energy demand model. The long-run relationship and the direction of causality results are different in different countries. Studies conducted in same country may produce different result (see Karanfil, 2009 and Payne, 2010) due to country-specific conditions and methodological differences. Results may also vary due to omitted variable bias or due to absence of inputs substitution possibilities (Akinlo, 2008, Ghali and El-Sakka, 2004 and Stern and Cleveland, 2004). Using Australia data from 1960 to 1999, Fatai et al. (2004) found cointegration between energy use and electricity consumption; and unidirectional causality from output to electricity consumption. Narayan and Smyth (2005) found cointegration between electricity consumption, employment, and real income; and long-run causality from employment and real income to electricity consumption. Narayan and Prasad (2008) used a bivariate model and showed that long-run causality runs from electricity consumption to output. These findings however, differ from the results of Chontanawat et al. (2008), who did not find cointegration between per-capita energy use and per-capita GDP in Australia for a sample of 1960–2000. To avoid potential omitted-variable bias in the above mentioned papers, Yuan et al. (2008) applied neo-classical production function to investigate causality between energy use and economic growth by incorporating capital and labor in case of China. Their empirical exercise found unidirectional causality running from energy use to economic growth. Wang et al. (2011) reported that energy demand, capital and employment Granger cause economic growth. You (2012) opined that clean and renewable energy use stimulates economic growth. On contrary, Zhang and Xu (2012) found causality is running from energy use to economic growth. Furthermore, Shuyun and Donghua (2011) supported the feedback hypothesis between energy use and economic growth and the same inference is reported by Soile (2012) in case of Indonesia. Clearly, there is a lack of consensus on the causality between energy use and income that points to the need for further research. The current study can be considered as a modest attempt to provide further evidence by using a theoretically more justified model to complement some of the existing research to better understand the underlying dynamics. This is main motivation for authors to fill gap research in case of China. The findings are expected to help craft appropriate economic, energy/environment, financial and trade policies to sustain economic growth in China. The objective of the paper is to use production function approach to explain the relationship between energy use and economic growth (Stern, 1993 and Stern, 2000) where GDP depends on energy use, capital and others inputs such as financial development and international trade. The extended Cobb–Douglas production framework helps us to explore a long run relation among the variables: energy use, economic growth, capital, financial development and international trade. The variables are chosen to capture the particular characteristics of Chinese economy. For a long run relation we implement the Autoregressive Distributed Lag (ARDL) and the Johansen Juselius approaches to cointegration, and the vector error correction model (VECM) for short run dynamics. The study period 1971–2011 is relatively long and hallmarked by major changes in the global landscape. These events may potentially cause structural break in the time series. In testing for the stationarity properties, this factor has been taken into account. The paper contributes by taking a comprehensive approach to examine the energy-economic growth nexus for China within a theoretically justified model that has not been done so far. The rest of the paper is organized as follows. Section 2 provides brief overview of Chinese economy. Section 3 reviews the relevant literature; Section 4 describes the methodological framework and data sources; Section 5 reports and analyses the results and, Section 6 offers concluding remarks with policy implications.