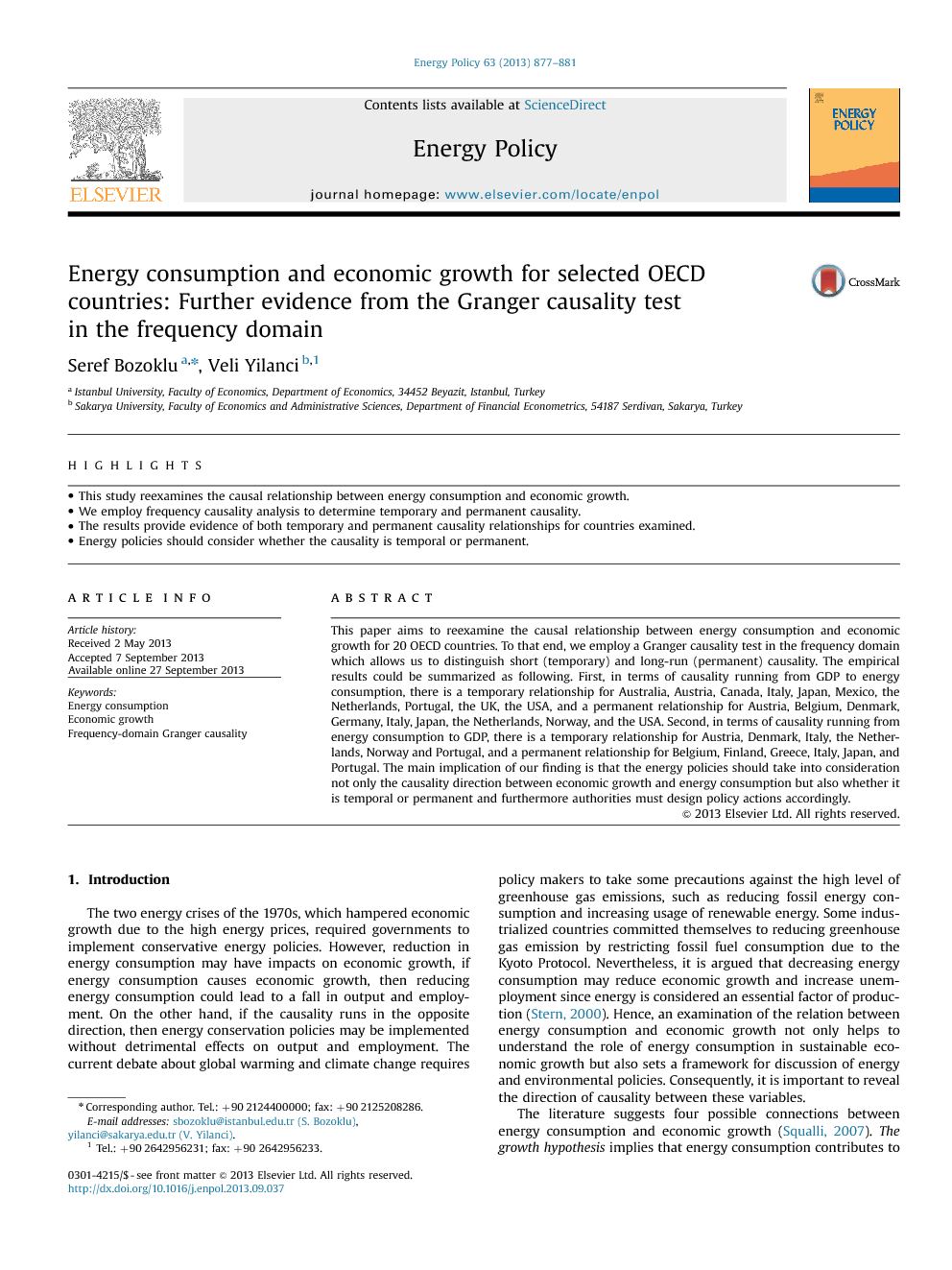 In this paper, we have examined the causal relationship between energy consumption and real GDP for OECD countries. Because energy is one of the basic factors for economic development, it has an important role in economic activities. Energy policies for many countries have more or less been affected by the Kyoto Protocol which aims at reducing emissions to mitigate climate change. However, the target of higher economic development could require energy consumption to increase. Hence, the effects of changes in energy policies on economic growth require more careful scrutiny. The results of traditional Granger causality tests are presented on the third and fourth columns of Table 1. The growth hypothesis is supported for Belgium and Japan, the conservation hypothesis is supported for Australia, Austria, Germany, Italy, the Netherlands, and Portugal, and the neutrality hypothesis is valid for Canada, Denmark, Finland, France, Greece, Mexico, Norway, Spain, Sweden, Turkey, the UK, the USA. Since traditional causality test does not consider time varying nature of the relationship, we perform the frequency causality test and our main findings are as follows. First, Belgium, Italy, and Japan have long term bi-directional causality between energy consumption and economic growth as suggested by the feedback hypothesis. Policy makers in these countries should take into account the feedback effect of real GDP on energy consumption by implementing regulations to reduce energy usage. In addition, energy policies aimed at improvements in energy consumption efficiency will not adversely affect the real GDP in the long run. Second, the neutrality hypothesis is valid for Australia, Canada, France, Mexico, Spain, Sweden, Turkey, and the UK in the long run. Since the neutrality hypothesis indicates that reducing energy consumption does not affect economic growth, conservative energy policies will not negatively affect real GDPs of these countries. Third, the growth hypothesis is suggested for Finland, Greece in the long run, for Austria, Denmark, the Netherlands, Norway in the short run, and for Portugal both in short and long run. Fourth, the conservation hypothesis is suggested for, Denmark, Germany, Norway, the USA in the long run, for Australia, Canada, Mexico, Portugal, the UK in the short run and for Austria, the Netherlands, and the USA both in short and long run. The third and the fourth results indicate that the causality relationship changes over time. The growth hypothesis dominates for Portugal, Greece and Finland in the long run. Therefore, the economic activity depends on energy usage and increases in energy consumption may stimulate real GDP in these countries. The conservation hypothesis implying that reducing demand for energy can only be expected to have a small short-run or without detrimental effect on overall economic activity dominates for Austria, Norway, Denmark and the Netherlands in the long run. Furthermore, these possible small short-run detrimental effects may well be caused by adjustment costs to long run energy saving technologies being implemented. The neutrality hypothesis dominates for Australia, Canada, the UK in the long run. As a result, there is little or no impact of energy consumption on real GDP and decreases in energy consumption would not negatively affect real GDP for these countries. In this respect, when energy use is not a vital input in the production function, economic policies aiming to increase economic growth should focus on capital, labor and productivity inputs. Our results have several implications both for energy economists and policy authorities. Energy economists must take account of possible changing causalities in examining between these variables. In particular, conventional Granger causality test could be inappropriate to examine dynamic relationship between energy consumption and real GDP. Policy authorities must take account of changing causalities and design policy actions accordingly. In this regard, the energy policies should take into consideration not only the causality direction between economic growth and energy consumption but also whether the direction is temporal or permanent, in other words whether it changes due to the time dimension.