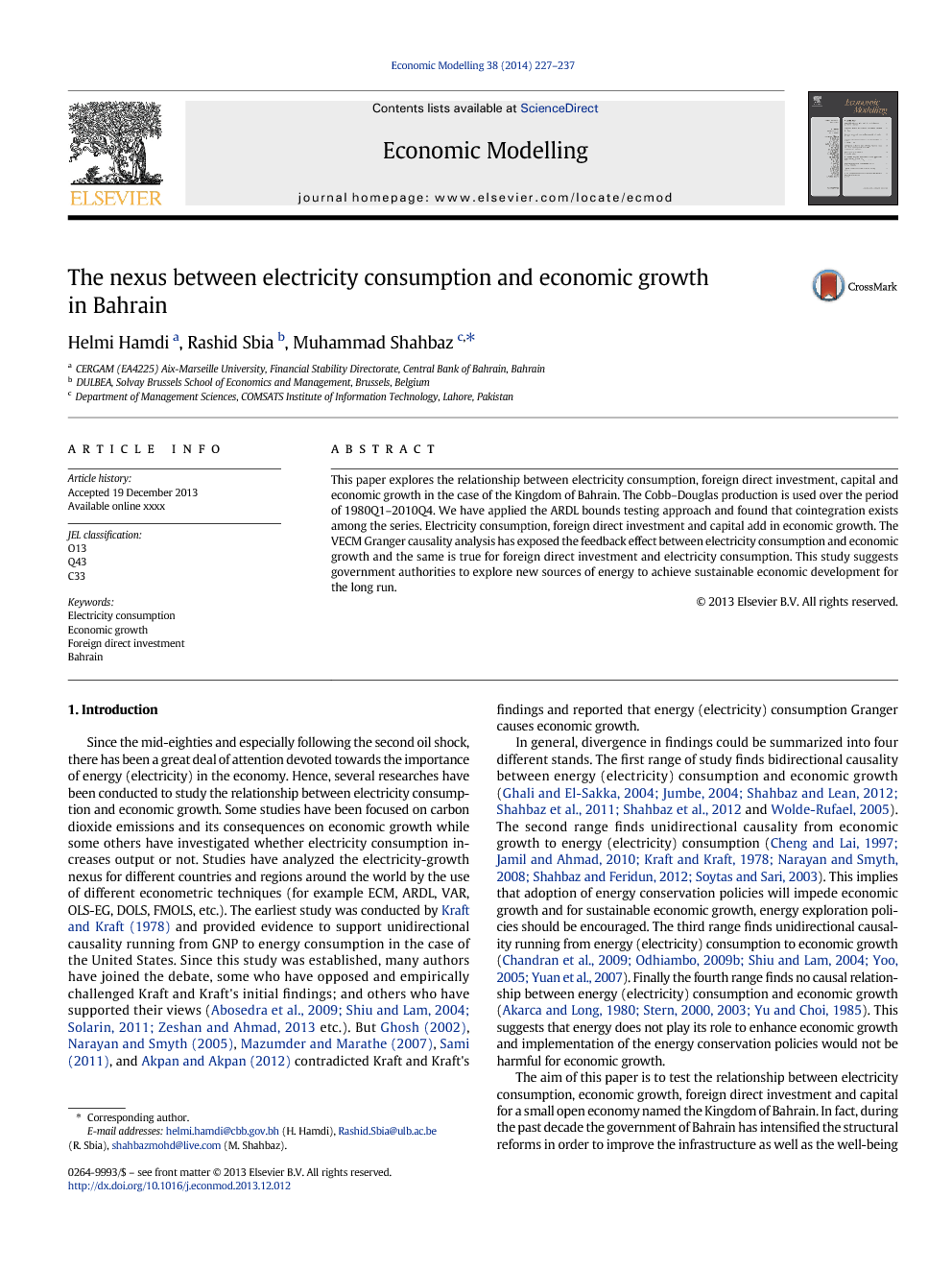 Since the mid-eighties and especially following the second oil shock, there has been a great deal of attention devoted towards the importance of energy (electricity) in the economy. Hence, several researches have been conducted to study the relationship between electricity consumption and economic growth. Some studies have been focused on carbon dioxide emissions and its consequences on economic growth while some others have investigated whether electricity consumption increases output or not. Studies have analyzed the electricity-growth nexus for different countries and regions around the world by the use of different econometric techniques (for example ECM, ARDL, VAR, OLS-EG, DOLS, FMOLS, etc.). The earliest study was conducted by Kraft and Kraft (1978) and provided evidence to support unidirectional causality running from GNP to energy consumption in the case of the United States. Since this study was established, many authors have joined the debate, some who have opposed and empirically challenged Kraft and Kraft's initial findings; and others who have supported their views (Abosedra et al., 2009, Shiu and Lam, 2004, Solarin, 2011 and Zeshan and Ahmad, 2013 etc.). But Ghosh (2002), Narayan and Smyth (2005), Mazumder and Marathe (2007), Sami (2011), and Akpan and Akpan (2012) contradicted Kraft and Kraft's findings and reported that energy (electricity) consumption Granger causes economic growth. In general, divergence in findings could be summarized into four different stands. The first range of study finds bidirectional causality between energy (electricity) consumption and economic growth (Ghali and El-Sakka, 2004, Jumbe, 2004, Shahbaz and Lean, 2012, Shahbaz et al., 2011 and Shahbaz et al., 2012 and Wolde-Rufael, 2005). The second range finds unidirectional causality from economic growth to energy (electricity) consumption (Cheng and Lai, 1997, Jamil and Ahmad, 2010, Kraft and Kraft, 1978, Narayan and Smyth, 2008, Shahbaz and Feridun, 2012 and Soytas and Sari, 2003). This implies that adoption of energy conservation policies will impede economic growth and for sustainable economic growth, energy exploration policies should be encouraged. The third range finds unidirectional causality running from energy (electricity) consumption to economic growth (Chandran et al., 2009, Odhiambo, 2009b, Shiu and Lam, 2004, Yoo, 2005 and Yuan et al., 2007). Finally the fourth range finds no causal relationship between energy (electricity) consumption and economic growth (Akarca and Long, 1980, Stern, 2000, Stern, 2003 and Yu and Choi, 1985). This suggests that energy does not play its role to enhance economic growth and implementation of the energy conservation policies would not be harmful for economic growth. The aim of this paper is to test the relationship between electricity consumption, economic growth, foreign direct investment and capital for a small open economy named the Kingdom of Bahrain. In fact, during the past decade the government of Bahrain has intensified the structural reforms in order to improve the infrastructure as well as the well-being of Bahraini citizens. Bahrain has become an open-ended economy with liberalized trade and capital account. It has also become the hub of international affairs and the preferred destination for investors. Consequently, the economy has known an unprecedented dynamism, population has been grown drastically and projects have been multiplied. Following this performance, energy consumption has increased drastically and electricity is becoming a driver of the local economy. Electricity has been a principal source of the increase in the standard of living of Bahraini citizens and it has played a crucial role in the technological and scientific advancement of the Kingdom. The data on electricity consumption (kWh per capita), per capita real GDP (constant 2000 US $), foreign direct investment (constant 2000 US $) per capita and capital (constant 2000 US $) per capita are used as the proxies for electricity consumption and economic growth, foreign direct investment and capital respectively. The testing procedure involves the following steps. At the first step, whether each variable contains a unit root will be examined using the usual the Augmented Dickey–Fuller (F-ADF) and Phillips and Perron (1988) and later on, we applied the Zivot and Andrews (1992) structural break unit root test. Further, to check the existence of structural breaks in time series we shall be using the Zivot and Andrews (1992) structural break unit root test with structural break. If the variables contain a unit root, the second step is to test whether there is a long-run cointegration relationship between the variables. If a long-run relationship between the variables is found, then final step is to apply the VECM Granger causality test to detect the nature of the causal relationship between the variables. The remainder of the paper is as follows: Section 2 presents an overview on energy supply in Bahrain, Section 3 reviews the relevant literature, Section 4 show model construction and data collection, Section 5 presents the econometric methodology, Section 6 presents results interpretations and Section 7 concludes and points out some policy implications.