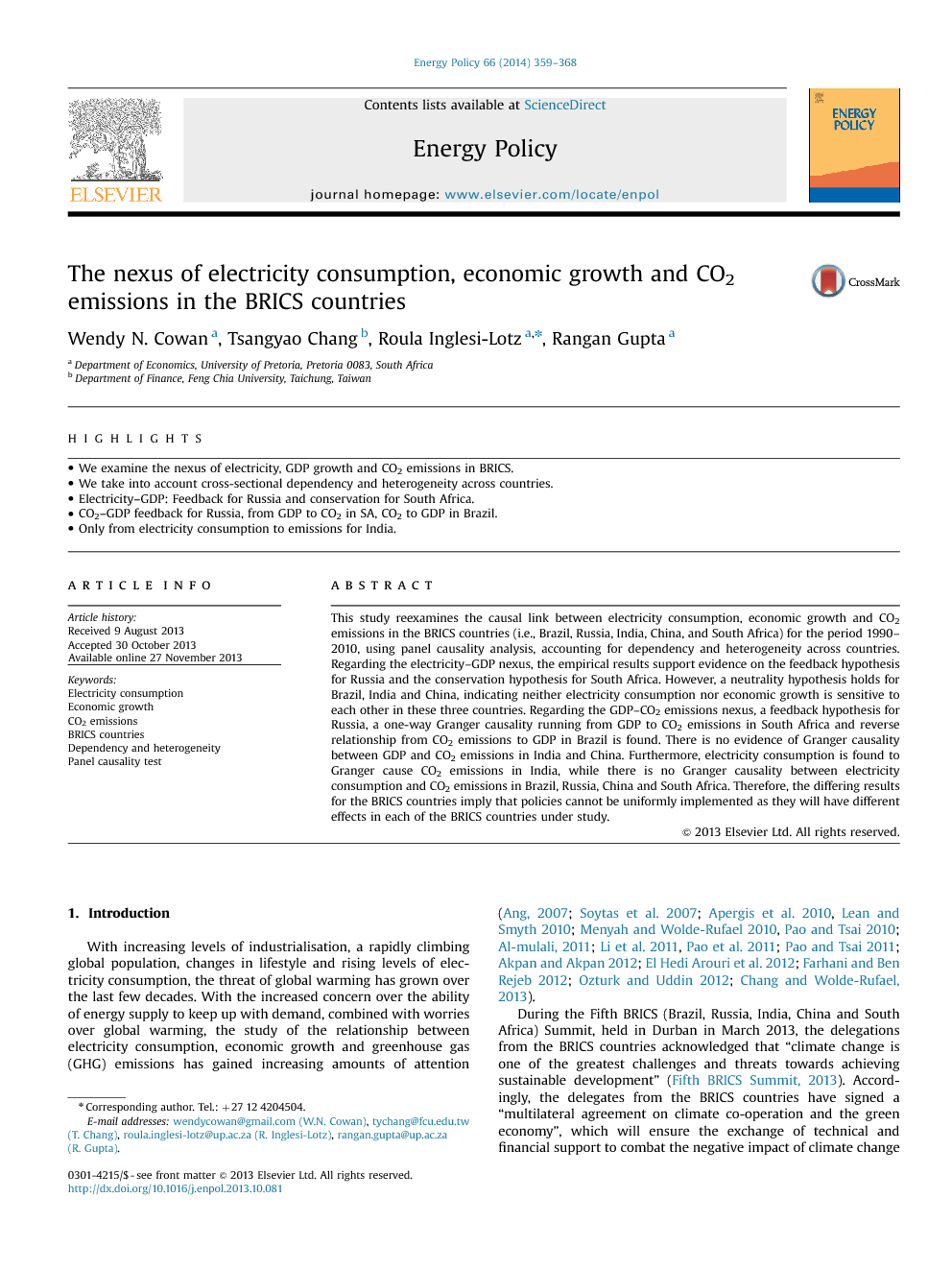 With increasing levels of industrialisation, a rapidly climbing global population, changes in lifestyle and rising levels of electricity consumption, the threat of global warming has grown over the last few decades. With the increased concern over the ability of energy supply to keep up with demand, combined with worries over global warming, the study of the relationship between electricity consumption, economic growth and greenhouse gas (GHG) emissions has gained increasing amounts of attention (Ang, 2007, Soytas et al., 2007, Apergis et al., 2010, Lean and Smyth, 2010, Menyah and Wolde-Rufael, 2010, Pao and Tsai, 2010, Al-mulali, 2011, Li et al., 2011, Pao et al., 2011, Pao and Tsai, 2011, Akpan and Akpan, 2012, El Hedi Arouri et al., 2012, Farhani and Ben Rejeb, 2012, Ozturk and Uddin, 2012 and Chang and Wolde-Rufael,). During the Fifth BRICS (Brazil, Russia, India, China and South Africa) Summit, held in Durban in March 2013, the delegations from the BRICS countries acknowledged that “climate change is one of the greatest challenges and threats towards achieving sustainable development” (Fifth BRICS Summit, 2013). Accordingly, the delegates from the BRICS countries have signed a “multilateral agreement on climate co-operation and the green economy”, which will ensure the exchange of technical and financial support to combat the negative impact of climate change on developing countries (South African Government News Agency, 2013). Due to recent economic growth and the fact that the BRICS countries still use large quantities of fossil fuels for electricity generation, emissions are expected to increase contributing further to global warming. The direction of causality between economic growth, electricity consumption and CO2 emissions is important for the implementation of related policies. If, for example, electricity consumption causes economic growth, the country would have to implement expansive energy policies. If electricity also causes CO2 emissions, then the country would rather have to invest in increasing electricity efficiency in order to decrease emissions without negatively impacting economic growth. If, on the other hand, economic growth causes electricity consumption, then conservative energy policies can be implemented without any adverse effect on economic growth. If there is no causality between these variables, then the country will have to implement separate policies to affect the levels of the individual variables as a change in the levels of one of the variables will have no impact on the other variable. Finally, if there is bidirectional causality between any of these variables, then they are mutually affected and policies need to take into consideration that any change in one will impact the other. This paper re-investigates the relationship between electricity consumption, economic growth, and CO2 emissions in the BRICS countries over the period of 1990–2010 by focusing on country-specific analysis. In detecting causal linkages the panel causality approach is applied. This approach is able to examine cross-state interrelations and country-specific heterogeneity, for example differences in energy resource endowments, energy policies, population size etc. The inclusion of CO2 emissions as a third variable will help to prevent possible omitted variable bias that may occur in the bivariate case. It also makes sense to include this variable as all of the BRICS countries have an abundance of energy resources, mainly fossil fuels, which when used for electricity generation result in CO2 emissions. In addition as mentioned earlier the BRICS countries have mutual agreements with regards to combating climate change and mitigate the effects of GHG emissions. Since the recent inclusion of South Africa into BRICS no study, to our knowledge, has been done using electricity consumption, economic growth and CO2 emissions. The plan of this paper is organised as follows. Section 2 follows as a literature review relating to energy consumption, economic growth and pollutant emissions. Section 3 presents the data used in this study and Section 4 briefly describes the bootstrap panel Granger causality test proposed by Kónya (2006). Section 5 presents the empirical results. Finally, Section 6 provides a discussion of the results of this paper's empirical findings and concludes the paper.