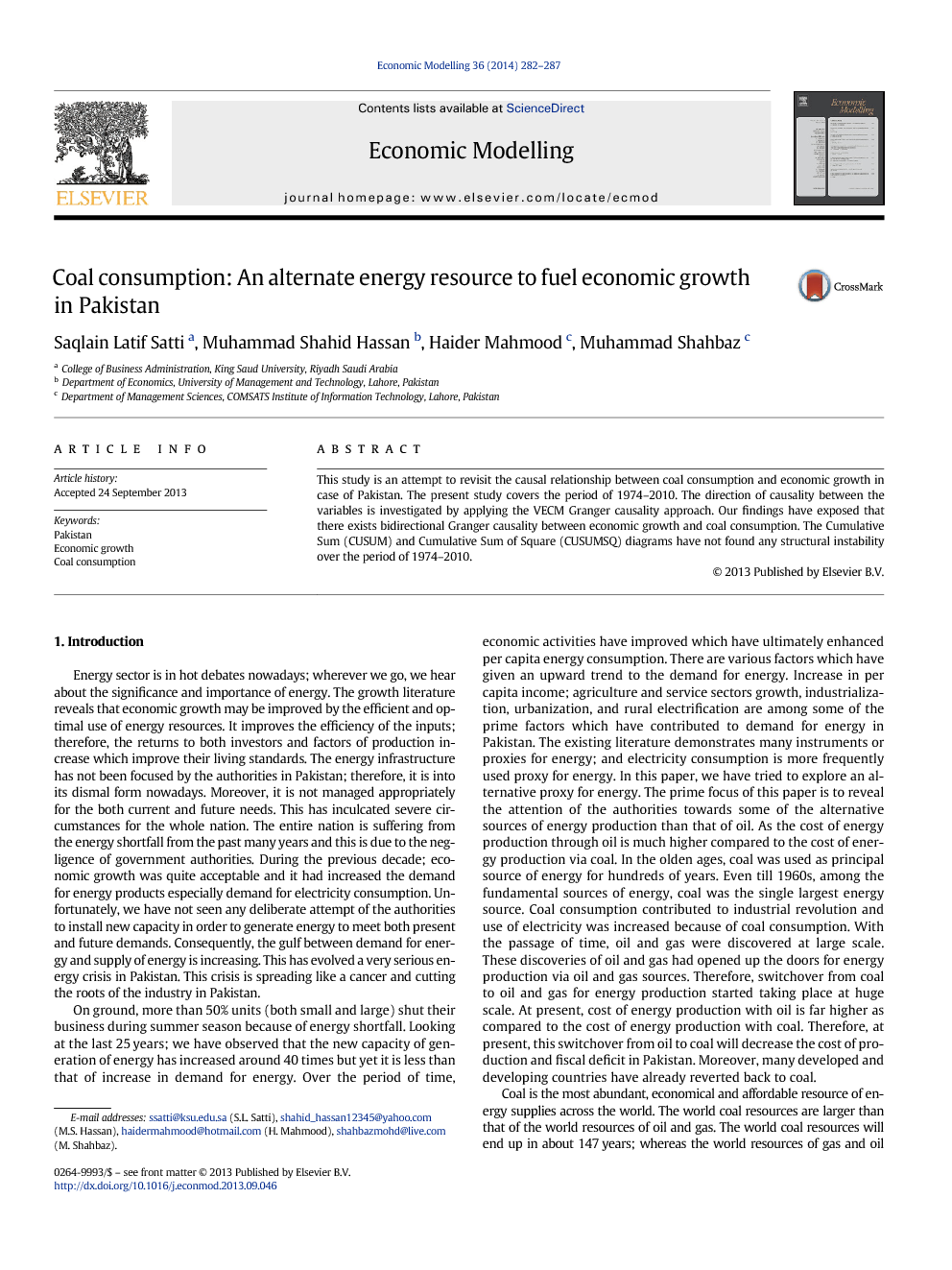 This study is an attempt to revisit the causal relationship between coal consumption and economic growth in case of Pakistan. The present study covers the period of 1974–2010. The direction of causality between the variables is investigated by applying the VECM Granger causality approach. Our findings have exposed that there exists bidirectional Granger causality between economic growth and coal consumption. The Cumulative Sum (CUSUM) and Cumulative Sum of Square (CUSUMSQ) diagrams have not found any structural instability over the period of 1974–2010.

Energy sector is in hot debates nowadays; wherever we go, we hear about the significance and importance of energy. The growth literature reveals that economic growth may be improved by the efficient and optimal use of energy resources. It improves the efficiency of the inputs; therefore, the returns to both investors and factors of production increase which improve their living standards. The energy infrastructure has not been focused by the authorities in Pakistan; therefore, it is into its dismal form nowadays. Moreover, it is not managed appropriately for the both current and future needs. This has inculcated severe circumstances for the whole nation. The entire nation is suffering from the energy shortfall from the past many years and this is due to the negligence of government authorities. During the previous decade; economic growth was quite acceptable and it had increased the demand for energy products especially demand for electricity consumption. Unfortunately, we have not seen any deliberate attempt of the authorities to install new capacity in order to generate energy to meet both present and future demands. Consequently, the gulf between demand for energy and supply of energy is increasing. This has evolved a very serious energy crisis in Pakistan. This crisis is spreading like a cancer and cutting the roots of the industry in Pakistan. On ground, more than 50% units (both small and large) shut their business during summer season because of energy shortfall. Looking at the last 25 years; we have observed that the new capacity of generation of energy has increased around 40 times but yet it is less than that of increase in demand for energy. Over the period of time, economic activities have improved which have ultimately enhanced per capita energy consumption. There are various factors which have given an upward trend to the demand for energy. Increase in per capita income; agriculture and service sectors growth, industrialization, urbanization, and rural electrification are among some of the prime factors which have contributed to demand for energy in Pakistan. The existing literature demonstrates many instruments or proxies for energy; and electricity consumption is more frequently used proxy for energy. In this paper, we have tried to explore an alternative proxy for energy. The prime focus of this paper is to reveal the attention of the authorities towards some of the alternative sources of energy production than that of oil. As the cost of energy production through oil is much higher compared to the cost of energy production via coal. In the olden ages, coal was used as principal source of energy for hundreds of years. Even till 1960s, among the fundamental sources of energy, coal was the single largest energy source. Coal consumption contributed to industrial revolution and use of electricity was increased because of coal consumption. With the passage of time, oil and gas were discovered at large scale. These discoveries of oil and gas had opened up the doors for energy production via oil and gas sources. Therefore, switchover from coal to oil and gas for energy production started taking place at huge scale. At present, cost of energy production with oil is far higher as compared to the cost of energy production with coal. Therefore, at present, this switchover from oil to coal will decrease the cost of production and fiscal deficit in Pakistan. Moreover, many developed and developing countries have already reverted back to coal. Coal is the most abundant, economical and affordable resource of energy supplies across the world. The world coal resources are larger than that of the world resources of oil and gas. The world coal resources will end up in about 147 years; whereas the world resources of gas and oil will end up in about 63 years and 41 years respectively. This reveals that the demand for coal resource will increase in the coming days (Wolde-Rufael, 2010). The world coal consumption was 127.5 quadrillion Btu in the year 2006 which will increase to 190.2 quadrillion Btu in the year 2030. It is also observed that out of the total production of coal: 4% is consumed by the households and commercial sectors; industrial users consume 34% coal, and remaining 62% is consumed by the electricity producing units respectively. Moreover; the world consumption of coal will increase to 28% in year 2030 (Energy Information Administration, 2009). Pakistan is among medium human developed countries (Human Development Report, 2013). Pakistan has blessed with rich coal resources at Tharparkar; mountains of precious metals at Balochistan, Gwadar Port. Dr. Samar Mubarak (December 27th, 2010) disclosed that the coal reserves at Tharparkar have been 175–185 trillion tones. It can produce 50,000 MW of electricity for decades and 100 million barrels of oil for 500 years.1 Therefore, by using all such resources, the cost of production may come down, and it will ultimately contribute to more economic growth. Therefore; in the light of above discussion, we have come to the point that coal consumption is the most significant and economical energy source for Pakistan, and we have found little literature on the relationship between coal consumption and economic growth in case of Pakistan. So; this article is an attempt to investigate the relationship between coal consumption and economic growth in Pakistan. Moreover; the earlier studies in addition to coal consumption considered labor force and capital formation as additional determinants of domestic production. This study is unique in terms of its model specification by incorporating unemployment, urbanization, service sector value added, and fiscal deficit along with coal consumption as the factors of domestic production in Pakistan.