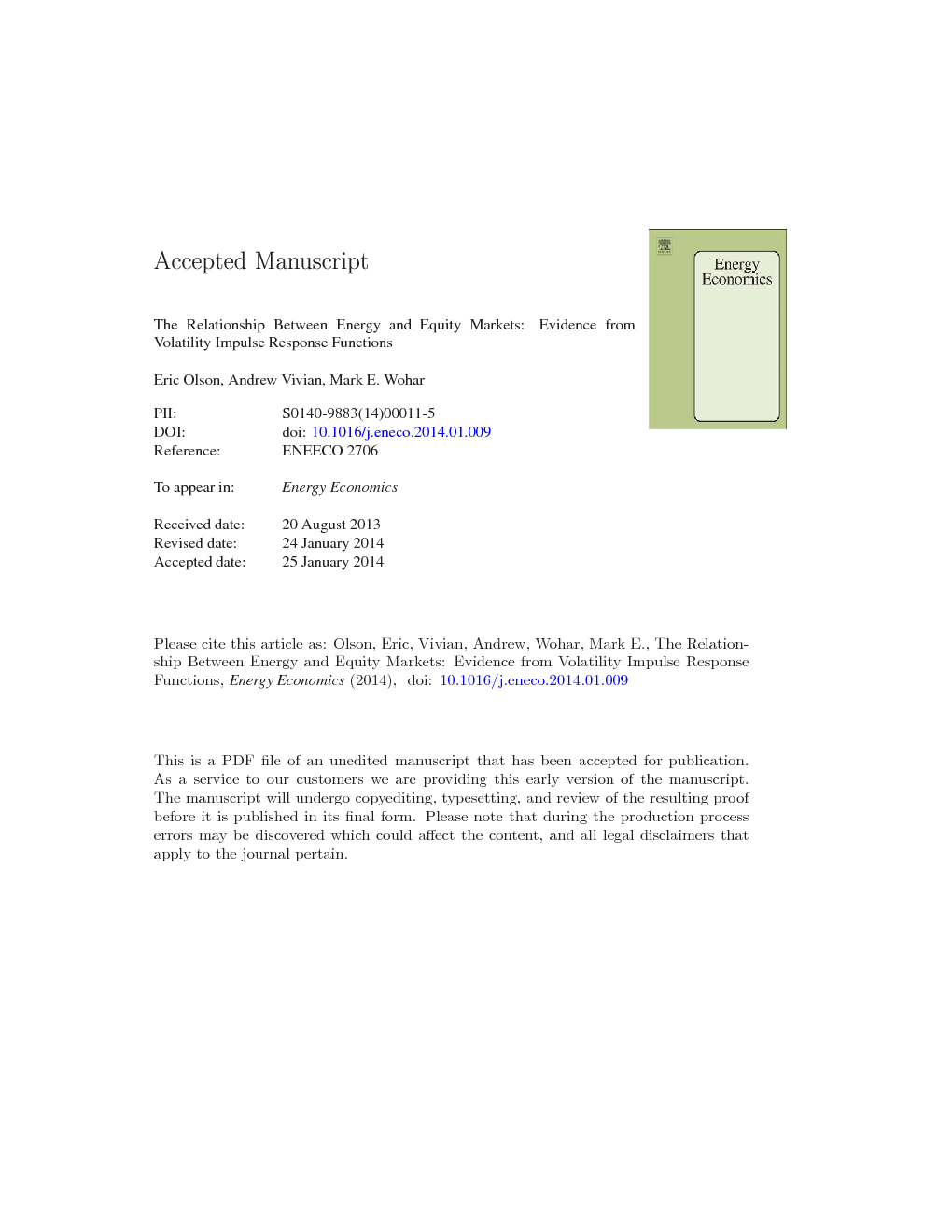 This paper examines the relationship between the energy and equity markets by estimating volatility impulse response functions from a multivariate BEKK model of the Goldman Sach’s Energy index and the S&P 500; in addition, we also calculate the time varying conditional correlations and time varying dynamic hedge ratios. From volatility impulse response functions, we find that low S&P 500 returns cause substantial increases in the volatility of the energy index; however, we find only a weak response from S&P 500 volatility to energy price shocks. Moreover, our dynamic hedge ratio anlysis suggests that the energy index is generally a poor hedging instrument.

This paper uses volatility impulse response functions, conditional correlations, and dynamic hedge ratios to examine the relationship between the energy sector and the S&P 500. Our volatility impulse response functions suggest that the volatility of energy is much more sensitive to low S&P 500 returns. In addition, it appears that the conditional variance of energy is particularly sensitive to low S&P 500 returns/news. This could reflect that the equity market is an earlier indicator of economic risk than the energy market (Soucek and Todorova, 2013 p597); in particular the S&P 500 should drop dramatically (have a low return shock) when high economic uncertainty is anticipated. Our finding that energy volatility is sensitive to equity return shocks is of considerable interest given that much prior literature emphasizes spillovers in the other direction from energy market to equity market (see for example Agren, 2006, Arouri et al., 2012 and Malik and Hammoudeh, 2007). In this paper we examine both time-varying conditional correlations and time-varying hedge ratios. Our results do not support the notion that the increased correlation between the energy and S&P 500 was the result of speculation; conditional correlations are not substantially different during the periods in which the “financialization” of energy commodities occurred. However, during the financial crisis period both the conditional correlation and hedge ratios increased markedly. While both these measures are closely connected their implications depend upon the type of commodity market participant considered. For a speculative investor pursuing a diversification strategy by investing in the energy index, the increased correlation will have shrunk the benefit from diversification when they were most needed. In contrast for a hedger, the increased hedge ratio (and increased correlation) indicates that the short position in the energy index is better able to offset movements from a long position in equity market. However except for the financial crisis period, equity-energy correlations were typically low but with substantial variability; this casts doubt upon the general use of energy as a good hedging instrument for the S&P 500.