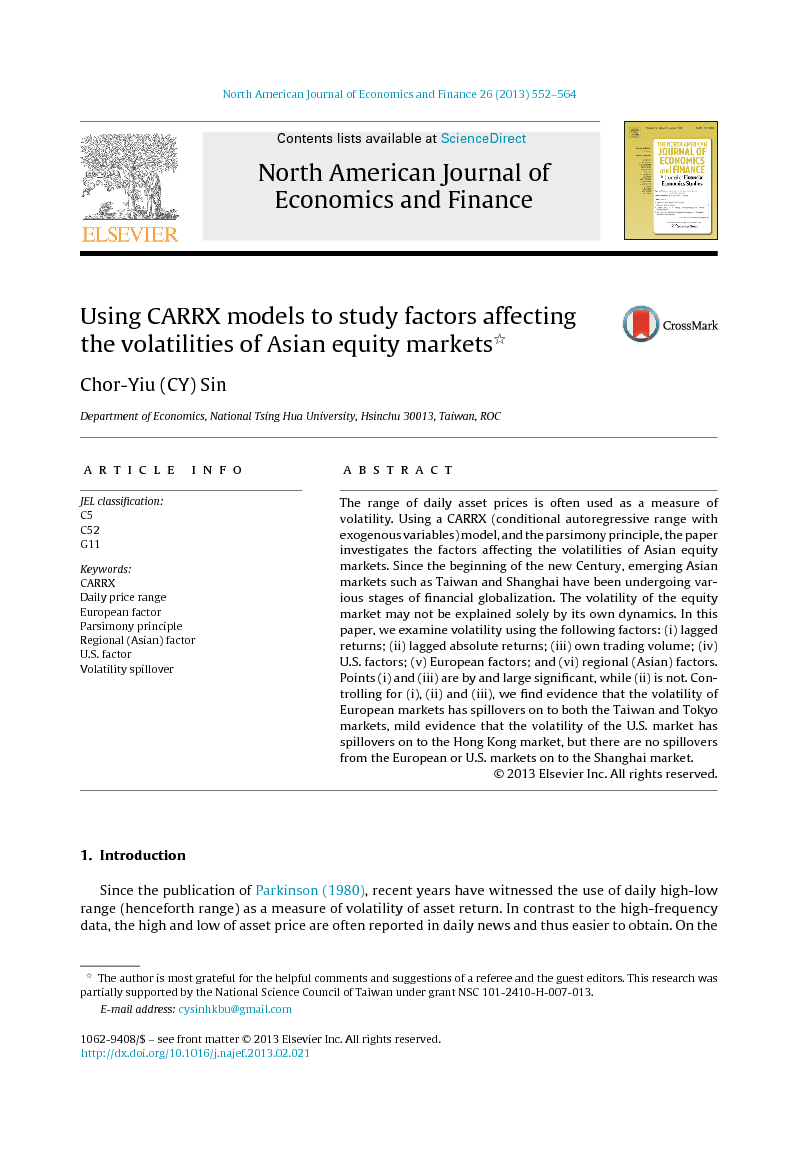 The range of daily asset prices is often used as a measure of volatility. Using a CARRX (conditional autoregressive range with exogenous variables) model, and the parsimony principle, the paper investigates the factors affecting the volatilities of Asian equity markets. Since the beginning of the new Century, emerging Asian markets such as Taiwan and Shanghai have been undergoing various stages of financial globalization. The volatility of the equity market may not be explained solely by its own dynamics. In this paper, we examine volatility using the following factors: (i) lagged returns; (ii) lagged absolute returns; (iii) own trading volume; (iv) U.S. factors; (v) European factors; and (vi) regional (Asian) factors. Points (i) and (iii) are by and large significant, while (ii) is not. Controlling for (i), (ii) and (iii), we find evidence that the volatility of European markets has spillovers on to both the Taiwan and Tokyo markets, mild evidence that the volatility of the U.S. market has spillovers on to the Hong Kong market, but there are no spillovers from the European or U.S. markets on to the Shanghai market.

Since the publication of Parkinson (1980), recent years have witnessed the use of daily high-low range (henceforth range) as a measure of volatility of asset return. In contrast to the high-frequency data, the high and low of asset price are often reported in daily news and thus easier to obtain. On the other hand, compared with the daily squared close-to-close return (henceforth squared return) or the daily absolute close-to-close return (henceforth absolute return), a dynamic range model similar to the prevalent GARCH model is more robust to outliers. In addition, there is some evidence that, compared with GARCH model, the dynamic range model is a good estimator of volatility (see, for instance, the results in Chou, 2005). Further, see also Gallant, Hsu, and Tauchen (1999), Alizadeh, Brandt, and Diebold (2001), Brandt and Diebold (2006) and Brandt and Jones (2006) for more applications of range in volatility forecast. Financial crises over the last thirty years, such as the 1987 stock market crash, the 1994 Mexican peso crisis, the 1997 Asian financial crisis in 1997, the 1998 Russian financial crisis, the 1999–2002 Argentine debt crisis in 2001, and the 2007 U.S. subprime crisis, have long suggested some information transmission from one equity market to the other or the others. Globalization results in spillovers over return and volatility among various markets. Focusing on the leading markets of the U.S., the U.K. and Japan, a number of papers find evidence of volatility spillovers. See, for instance, [Hamao et al., 1990] and [Martens and Poon, 2001], Skintzi and Refenes (2006). As far as Asian markets are concerned, Bekaert and Harvey (1997) use time-series and cross-sectional models and find that financial liberalizations increase return correlations between emerging markets and the leading markets, but the volatilities are not driven up. Similarly, Ng (2000) concludes that liberalization events such as capital market reform in the Pacific-Basin Markets, affect the relative importance of the world and regional market factors, where the world market factors are proxied by the U.S. shocks and the regional market factors are proxied by the Japan shocks. She also finds significant spillovers from the region to the majority of the Pacific-Basin markets. Constructing a bivariate EGARCH (exponential GARCH) model for Japan and other seven Asian markets with an exogenous U.S. factor, Miyakoshi (2003) finds that the volatility of the Asian market is by and large affected by Japan, but not the U.S. Further and rather surprisingly, the volatility of the Asian market has a negative impact on that of Japan. On the other hand, Worthington and Higgs (2004) investigate the volatility transmission among three developed Asian markets (Hong Kong, Japan and Singapore) and six Asian emerging markets (Indonesia, Korea, Malaysia, the Philippines, Taiwan and Thailand). Developing an MGARCH (multivariate GARCH) model, they find that own-volatility spillovers are generally higher than cross-volatility spillovers for all markets, but especially for the emerging markets. Using a panel of 10 emerging and industrial financial markets, crisis, Dungey, Fry, Gonzáalez-Hermosillo, and Martin (2007) showed contagion was spread all around international equity markets the during the LTCM crisis, but was spread selectively during the Russian crisis. Recently, Diebold and Yilmaz (2009) formulate and examine variants of measures of return spillovers and volatility spillovers based directly on the familiar notion of variance decompositions in vector autoregressions. Applying the framework to nineteen equity markets for the last twenty years, they find volatility spillovers display no trend but clear bursts associated with readily identified “crisis” events. Singh, Kumar, and Pandey (2010) examine volatility spillovers across North American, European and Asian equity markets. Using a VAR (Vector Autoregression)-GARCH of fifteen equity indices, they find that a greater regional influence among Asian and European equity markets. Examining the factors affecting the volatilities of the Asian equity markets, this paper differ from the existing literature in twofold: (i) we use range as a measure of volatility and employ a dynamic model for range, namely CARRX developed by Chou (2005); (ii) we include the trading volume as one of the exogenous variables. Trading volume is found in the literature one of the important exogenous variables. See, for instance, Karpoff (1987), Lamoureux and Lastrapes (1990), Fleming, Kirby, and Ostdiek (2006), and Asai and Brugal (in press). This paper considers two emerging markets (Taiwan and Shanghai) 1 and two developed markets (Hong Kong and Japan) will be the object of investigation. Out of the emerging Asian markets, Shanghai and Taiwan have been undergoing various stages of financial globalization in the last decade, and it is interesting to see if there have been spillovers to these two markets. On the other hand, the other developed Asian markets such as Singapore are not considered since some of the variables are relatively difficult to obtain. See also Section 3. The DJAT (rather than the Tokyo Nikkei 225 index) is used as the Asian factor. The U.S. factor is the S&P500, while the European factor is one of the followings: DAX, FTSE100 and CAC40. This paper is organized as follows. The next section is on the methodology, while Section 3 is about the data description and the empirical model. Section 4 is devoted to the empirical results. Both in-sample estimation and the post-sample model comparisons can be found. Section 5 concludes. A code, which is modified upon the R-code acd.R written by Professor Ruey S. Tsay (http://faculty.chicagobooth.edu/ruey.tsay/teaching/bs41202/sp2012/), is available from the author.

Using daily range, this paper employs a CARRX (conditional autoregressive range with exogenous variables) model to investigate the factors affecting the volatilities of four major Asian equity markets, namely, Taiwan, Shanghai, Hong Kong and Tokyo. First proposed by Chou (2005), the CARRX model is easier to estimate and the data requirement is less stringent. The following factors are under considered: (i) lagged return; (ii) lagged absolute return, (iii) own trading volume, (iv) the U.S. factor, (v) the European factor, and (vi) the regional (Asian) factor. In-sample results, which are supported by the post-sample forecast results, suggest that Points (i) and (iii) are by and large significant, while Point (ii) is not. Being an emerging market, Taiwan behaves closer to Tokyo, which is a developed market. In sum, there is evidence that the lagged daily range of DAX (German market) has an impact on the daily range of TAIEX (Taiwan market) and that of NIKKEI225 (Tokyo market). The effect on the Taiwan market is stronger though. Further, we find mild evidence that the lagged daily range of SP500 (the U.S. market) has an impact on the daily range of HSI (Hong Kong). No spillover (neither from Europe nor from the U.S.) to the daily range of SSE (Shanghai market) though. Understanding the volatility spillover is essential for asset pricing, for global asset allocation and global hedging strategies, as well as for policy evaluation regarding international capital flows. As one can see in Table 6 and 9 (the middle panel), one standard deviation increase in the Europe factor will result in 0.0156 to 0.0171 standard deviation increase in the daily range of Taiwan; and 0.0077–0.0195 standard deviation increase in that of Tokyo. On the other hand, from Table 8, one standard deviation increase in the U.S. factor will result in 0.0019–0.0136 standard deviation increase in the daily range of Hong Kong. The magnitude is not that substantial, compared to the other factors such as lagged trading volume and lagged absolute return, but the impact may be huge, should there be a big increase in the daily range of equity indices such as DAX or SP500. Two interesting issues arise. The first one is technical. Following the lines in the literature, we did compute the Ljung–Box i . i . d . test for the residual View the MathML sourceRt/ψˆt−1. Taking 12 lags, depending on the model, the Q(12) test statistic ranges from 9.00 to 17.00 and it is unclear if the statistic is significant or not. It is because, following the practice in the ARMA literature that, one may want to adjust for the degrees of freedom of the number of parameters estimated. The second issue is conceptual. This paper uses DJAT as the regional (Asian) factor (and find no significance at all), but it may be the case that one market (such as Shanghai) has an direct impact on the other one (such as Taiwan). If this is the case, a simultaneous model needs to be specified. We leave these interesting issues to further study.