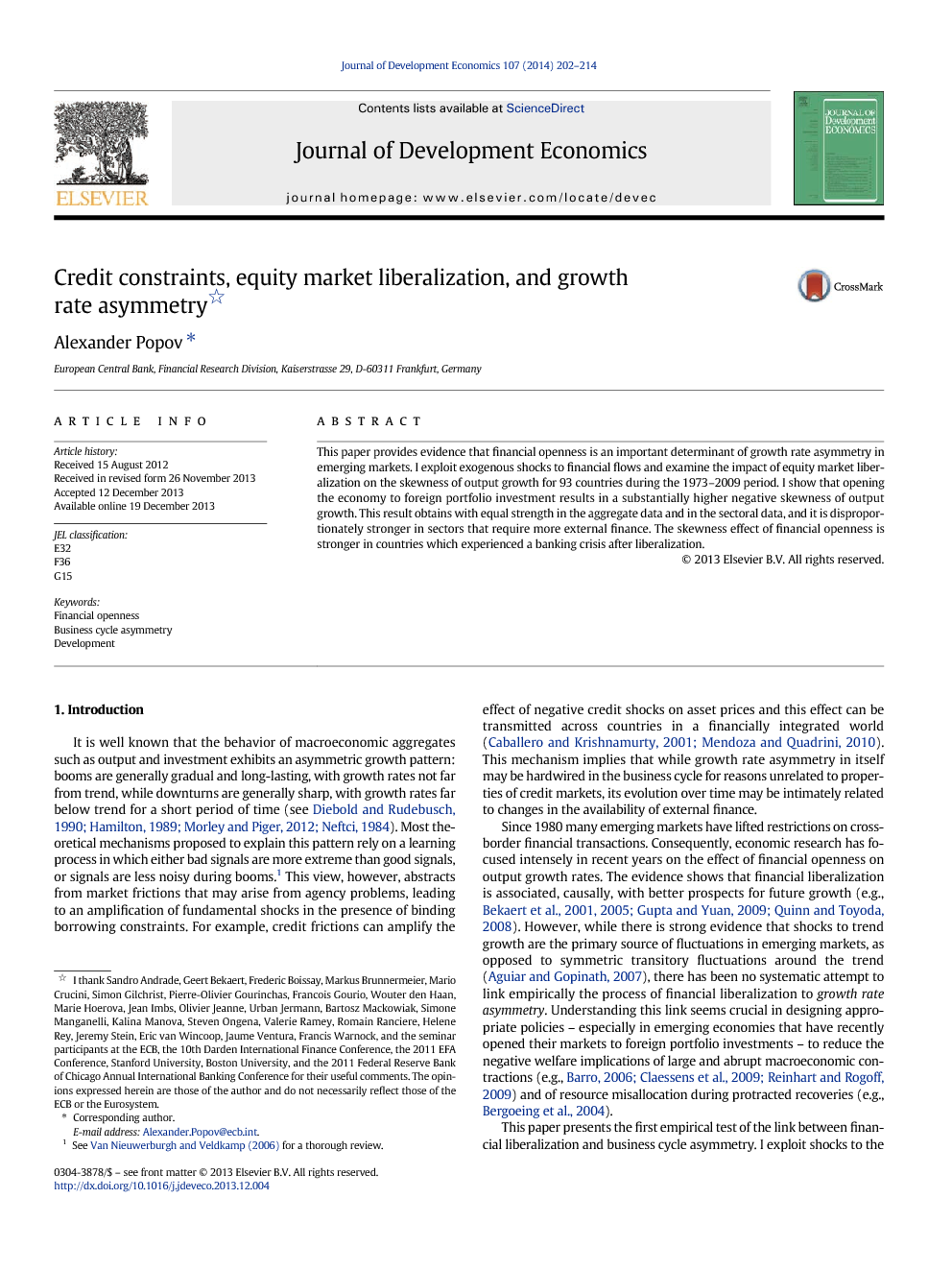 This paper provides evidence that financial openness is an important determinant of growth rate asymmetry in emerging markets. I exploit exogenous shocks to financial flows and examine the impact of equity market liberalization on the skewness of output growth for 93 countries during the 1973–2009 period. I show that opening the economy to foreign portfolio investment results in a substantially higher negative skewness of output growth. This result obtains with equal strength in the aggregate data and in the sectoral data, and it is disproportionately stronger in sectors that require more external finance. The skewness effect of financial openness is stronger in countries which experienced a banking crisis after liberalization.

It is well known that the behavior of macroeconomic aggregates such as output and investment exhibits an asymmetric growth pattern: booms are generally gradual and long-lasting, with growth rates not far from trend, while downturns are generally sharp, with growth rates far below trend for a short period of time (see Diebold and Rudebusch, 1990, Hamilton, 1989, Morley and Piger, 2012 and Neftci, 1984). Most theoretical mechanisms proposed to explain this pattern rely on a learning process in which either bad signals are more extreme than good signals, or signals are less noisy during booms.1 This view, however, abstracts from market frictions that may arise from agency problems, leading to an amplification of fundamental shocks in the presence of binding borrowing constraints. For example, credit frictions can amplify the effect of negative credit shocks on asset prices and this effect can be transmitted across countries in a financially integrated world (Caballero and Krishnamurty, 2001 and Mendoza and Quadrini, 2010). This mechanism implies that while growth rate asymmetry in itself may be hardwired in the business cycle for reasons unrelated to properties of credit markets, its evolution over time may be intimately related to changes in the availability of external finance. Since 1980 many emerging markets have lifted restrictions on cross-border financial transactions. Consequently, economic research has focused intensely in recent years on the effect of financial openness on output growth rates. The evidence shows that financial liberalization is associated, causally, with better prospects for future growth (e.g., Bekaert et al., 2001, Bekaert et al., 2005, Gupta and Yuan, 2009 and Quinn and Toyoda, 2008). However, while there is strong evidence that shocks to trend growth are the primary source of fluctuations in emerging markets, as opposed to symmetric transitory fluctuations around the trend (Aguiar and Gopinath, 2007), there has been no systematic attempt to link empirically the process of financial liberalization to growth rate asymmetry. Understanding this link seems crucial in designing appropriate policies – especially in emerging economies that have recently opened their markets to foreign portfolio investments – to reduce the negative welfare implications of large and abrupt macroeconomic contractions (e.g., Barro, 2006, Claessens et al., 2009 and Reinhart and Rogoff, 2009) and of resource misallocation during protracted recoveries (e.g., Bergoeing et al., 2004). This paper presents the first empirical test of the link between financial liberalization and business cycle asymmetry. I exploit shocks to the availability of external finance and study the impact of equity market liberalization on the negative skewness of output growth in emerging markets. Using a sample of 93 countries, I find that over the 1973–2009 period countries that became financially open experienced a large increase in the negative skewness of GDP growth relative to otherwise similar countries that remained closed to foreign portfolio investment. Fig. 1 illustrates the main result of the paper. It shows that over this period, the skewness of GDP growth declined globally. However, while for the countries that did not liberalize their stock markets, average GDP growth skewness declined from − 0.0004 in 1991 (the median liberalization year in the sample) to − 0.1913 15 years later, for the countries that opened their markets to foreign portfolio investment during the sample period, average GDP growth skewness declined from − 0.0930 in the liberalization year to − 0.8513 15 years later.

This paper presents novel evidence that credit constraints are an important determinant of growth rate asymmetry. I exploit shocks to the availability of external finance and study the impact of equity market liberalization on the skewness of output growth. I show that financially open countries experience a large increase in negative growth skewness relative to similar countries that remain closed to foreign portfolio investment. Next, I use the variation in external finance requirements across industries, and show that financial liberalization is associated with an increase in the negative skewness of sectoral value added growth, more so in industries that rely on external finance for technological reasons. The main results of the paper are robust to accounting for the non-random nature of liberalization, to using alternative definitions of financial openness, and to controlling for other dimensions of development that may correlate with financial openness. The results in this paper contribute to the literature on finance and development and to the business cycle literature in three important ways. First, I show that financial openness is associated with a more asymmetric business cycle, and make a strong case for a causal link from finance to growth rate asymmetry by exploiting the sectoral variation in dependence on external finance. My results thus imply that while growth rate asymmetry may be hardwired in the business cycle for reasons unrelated to properties of credit markets, its evolution over time may be causally related to changes in the availability of external finance over the development cycle. Second, the fact that I record the same effect of financial openness on skewness in aggregate and in sectoral data is one of the central results of the paper. Imbs (2007) shows that while high-growth sectors tend to be more volatile, in the aggregate data a component of aggregate volatility dominates which correlates negatively with growth. Consequently, an increase in sectoral volatility is not inconsistent with a decrease in aggregate volatility. I show that the negative effect of financial openness on sectoral output skewness is a phenomenon that is not diversified away in aggregate data. Finally, I uncover a potentially important welfare cost of financial openness. While much attention has been devoted in recent years to the determinants of macroeconomic volatility – among them, credit market imperfections – the welfare loss of higher business cycle volatility may ultimately be miniscule (Lucas, 1987). At the same time, it has recently been demonstrated that within a class of models which replicate how asset markets price consumption uncertainty, individuals are willing to pay a high premium in exchange for eliminating all chances for rare, large, and abrupt macroeconomic contractions (Barro, 2006 and Barro, 2009). To the extent that output risk cannot be fully insured, the same increase in volatility would have considerably larger negative implications for consumer welfare if it came from one single large contraction than if it came from a series of symmetric deviations from a stable growth path. Estimating the combined welfare implications of the higher growth and higher negative growth skewness, brought about by liberalization, would require a fully specified growth model, as well as a robust empirical test of the role of the government sector in insuring away not just excess volatility, but also excess negative skewness. While beyond the scope of this paper, such an investigation is an important avenue of future research, especially in light of the evidence in Gourinchas and Jeanne (2006) who argue that the welfare gains from liberalization are limited even in a framework which neglects the cost of asymmetric risk.