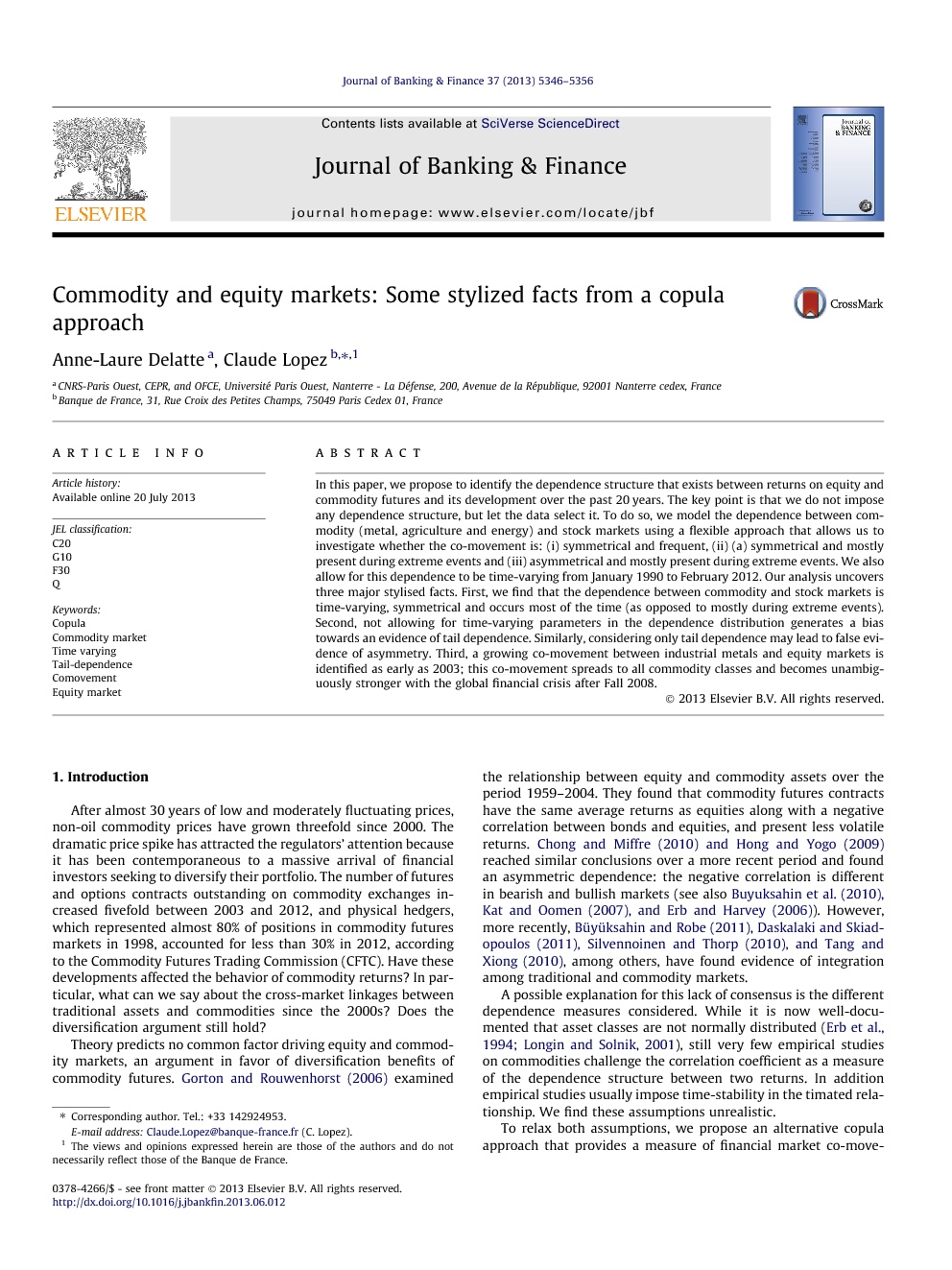 In this paper, we propose to identify the dependence structure that exists between returns on equity and commodity futures and its development over the past 20 years. The key point is that we do not impose any dependence structure, but let the data select it. To do so, we model the dependence between commodity (metal, agriculture and energy) and stock markets using a flexible approach that allows us to investigate whether the co-movement is: (i) symmetrical and frequent, (ii) (a) symmetrical and mostly present during extreme events and (iii) asymmetrical and mostly present during extreme events. We also allow for this dependence to be time-varying from January 1990 to February 2012. Our analysis uncovers three major stylised facts. First, we find that the dependence between commodity and stock markets is time-varying, symmetrical and occurs most of the time (as opposed to mostly during extreme events). Second, not allowing for time-varying parameters in the dependence distribution generates a bias towards an evidence of tail dependence. Similarly, considering only tail dependence may lead to false evidence of asymmetry. Third, a growing co-movement between industrial metals and equity markets is identified as early as 2003; this co-movement spreads to all commodity classes and becomes unambiguously stronger with the global financial crisis after Fall 2008.

After almost 30 years of low and moderately fluctuating prices, non-oil commodity prices have grown threefold since 2000. The dramatic price spike has attracted the regulators’ attention because it has been contemporaneous to a massive arrival of financial investors seeking to diversify their portfolio. The number of futures and options contracts outstanding on commodity exchanges increased fivefold between 2003 and 2012, and physical hedgers, which represented almost 80% of positions in commodity futures markets in 1998, accounted for less than 30% in 2012, according to the Commodity Futures Trading Commission (CFTC). Have these developments affected the behavior of commodity returns? In particular, what can we say about the cross-market linkages between traditional assets and commodities since the 2000s? Does the diversification argument still hold? Theory predicts no common factor driving equity and commodity markets, an argument in favor of diversification benefits of commodity futures. Gorton and Rouwenhorst (2006) examined the relationship between equity and commodity assets over the period 1959–2004. They found that commodity futures contracts have the same average returns as equities along with a negative correlation between bonds and equities, and present less volatile returns. Chong and Miffre, 2010 and Hong and Yogo, 2009 reached similar conclusions over a more recent period and found an asymmetric dependence: the negative correlation is different in bearish and bullish markets (see also Buyuksahin et al., 2010, Kat and Oomen, 2007 and Erb and Harvey, 2006). However, more recently, Büyüksahin and Robe (2011), Daskalaki and Skiadopoulos, 2011, Silvennoinen and Thorp, 2010 and Tang and Xiong, 2010, among others, have found evidence of integration among traditional and commodity markets. A possible explanation for this lack of consensus is the different dependence measures considered. While it is now well-documented that asset classes are not normally distributed (Erb et al., 1994 and Longin and Solnik, 2001), still very few empirical studies on commodities challenge the correlation coefficient as a measure of the dependence structure between two returns. In addition empirical studies usually impose time-stability in the timated relationship. We find these assumptions unrealistic. To relax both assumptions, we propose an alternative copula approach that provides a measure of financial market co-movements addressing the limits raised above. First, it disentangles the characteristics of each return series from the dependence structure that links them together. This approach allows for a wide range of models that capture different types of dependence between variables, such as tail and asymmetrical dependence. Second, it does not require elliptically distributed returns. Third, the dependence captured by a copula is invariant with respect to increasing and continuous transformations in the marginal distributions, i.e. the copula does not change with returns or log returns. To our knowledge, no academic work uses copula to model the co-movement between commodities and traditional assets.2 In this paper, we propose to identify the dependence structure that exists between the returns on equity and commodity futures over the past 20 years. The key point is that we adopt a totally agnostic approach, letting the data select the dependence structure. Clearly, we rely on Patton’s (2006) extension of Sklar’s (1959) theorem to the conditional case and his parametric model on the development of the copula. That is, we consider three types of dependence structures ((i) symmetrical and frequent, (ii) (a) symmetrical or asymmetrical and mostly present during extreme events and (iii) mostly present during extreme and negative events, i.e. asymmetrical) and allow the strength of the relationship to be constant and time-varying within each structure. Finally, we retain the two most likely types of dependence out of the six considered. As half of the exposure to commodity price movements is based on commodity index investment, we first investigate the dependence between the total returns of the two most popular commodity indices and their sub-indices (the Goldman Sachs Commodity Index (SP-GSCI) and the Dow-Jones UBS Commodity Index (DJ-UBS)) and four major equity indices (SP500, FTSE100, CAC40, DAX30).3 Second, we account for the heterogeneity among commodities by focusing on a sample of individual commodity futures covering the agricultural, industrial metals and energy markets. We study daily data over the period January 1990–February 2012. Our analysis uncovers three stylized facts. First, we find that the dependence between commodity and stock markets is time varying, symmetrical and is present most of the time (as opposed to mostly in extreme events). This result holds for the indices as well as for the 21 commodities under investigation. This result leads to the second stylized fact: not allowing for time-varying parameters in the dependence distribution generates a bias towards an evidence of tail-dependence. Similarly, considering only tail-dependence may falsely lead to evidence of an asymmetriccal relation between the returns. Finally, the last stylized fact highlights the impact of the 2008 crisis: the time-varying parameter shows that the co-movement between commodity and asset markets becomes stronger from September 2008 with the bankruptcy of Lehman Brothers and the strengthening of the financial crisis. This paper is organized as follows. Section 1 presents the main results in the recent empirical literature on co-movements between commodity and traditional asset markets. Section 2 focuses on presenting the concept of copulas and the different models considered, while Section 3 describes the data and discusses the results. Section 4 concludes.

In this paper, we investigate the cross-market linkages between equity and commodity markets using a copula approach. Unlike the DCC approach, our method considers a wide range of dependence structures to describe the co-movement between these markets and lets the data choose the best-fitting one. More specifically, we allow for three types of co-movement: (i) frequent and symmetrical (ii) mostly present during extreme events and either symmetrical or asymmetrical (iii) mostly present during negative and extreme events, i.e. asymmetrical. Our analysis highlights three major stylised facts. First, the dependence between commodity and stock markets is time-varying, symmetrical and occurs most of the time. Second, imposing a constant relationship over time may lead to false evidence of tail dependence, while imposing tail dependence may lead to spurious evidence of asymmetry. Third, the co-movement between industrial metals and equity markets increased as early as 2003 and spread to all commodity classes with the global financial crisis after Fall 2008. In sum, the integration of some commodities with equity indices started mildly in the 2000s, a trend that the global crisis has definitely strengthened.