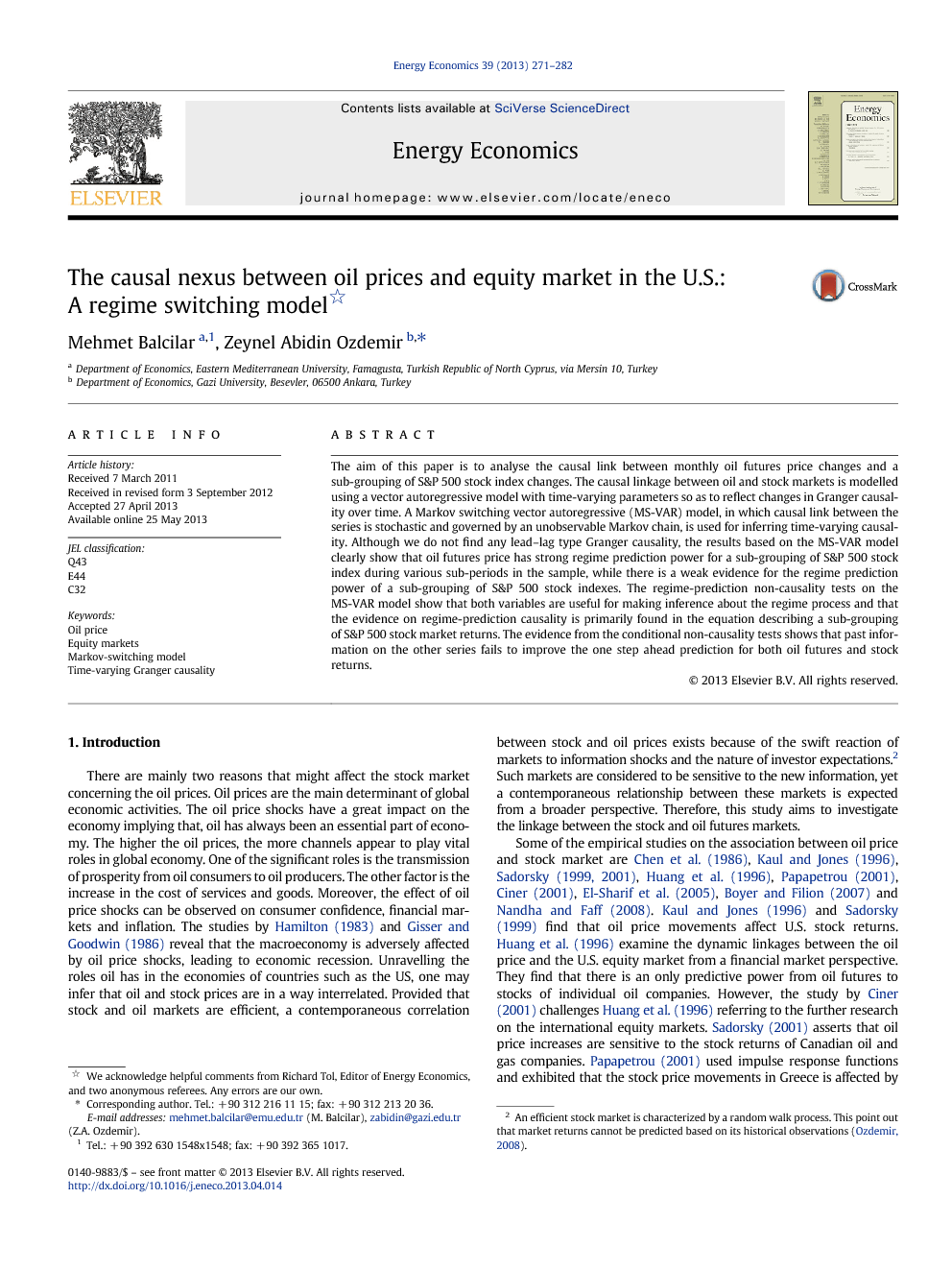 The aim of this paper is to analyse the causal link between monthly oil futures price changes and a sub-grouping of S&P 500 stock index changes. The causal linkage between oil and stock markets is modelled using a vector autoregressive model with time-varying parameters so as to reflect changes in Granger causality over time. A Markov switching vector autoregressive (MS-VAR) model, in which causal link between the series is stochastic and governed by an unobservable Markov chain, is used for inferring time-varying causality. Although we do not find any lead–lag type Granger causality, the results based on the MS-VAR model clearly show that oil futures price has strong regime prediction power for a sub-grouping of S&P 500 stock index during various sub-periods in the sample, while there is a weak evidence for the regime prediction power of a sub-grouping of S&P 500 stock indexes. The regime-prediction non-causality tests on the MS-VAR model show that both variables are useful for making inference about the regime process and that the evidence on regime-prediction causality is primarily found in the equation describing a sub-grouping of S&P 500 stock market returns. The evidence from the conditional non-causality tests shows that past information on the other series fails to improve the one step ahead prediction for both oil futures and stock returns.

In this study, using a VAR model with time-varying parameters we carry out Granger causality analysis in situations where causality is non-permanent. We examine the causal relationship between oil prices and the U.S. equity market. The data used in the study are the monthly data of the crude oil futures contracts and a sub-grouping of S&P500 index, namely the Industry Sector, Energy Sector, Energy Equipment & Services, Oil & Gas & Consumable fuels, Oil & Gas Exploration & Production and Oil & Gas Storage & Transportation indexes. The findings from the switching model indicate that oil futures returns have a significant predictive power for each of the S&P 500 sub-index returns considered during various sub-periods in the sample, while there is a weak predictive content from each of the S&P 500 sub-index returns to the oil futures price. In addition, the findings reveal that there is no lead–lag relation between the oil futures price and each of the S&P 500 sub-index returns during various sub-periods in the sample, but each market has predictive power to infer the regime of the other. The regime predictive power of the oil market for the stock market is much stronger than the regime predictive power of the stock market for the oil market. The empirical results from the present study overwhelmingly support a nonlinear relationship between the oil price and economy, as suggested by Hamilton (2001). The paper uses a novel approach, based on an MS-VAR model that uniquely identifies all possible causality directions, to test the conditional lead–lag and the regime-prediction Granger causality between oil and equity markets. We obtain strong evidence against the existence of lead–lag relationships. However, the regime-prediction Granger causality tests obtain overwhelming evidence that although both the oil and stock market returns are informative about the regime, there is only full sample causality evidence from the oil market to the stock market. The results of the study point to the following two directions. One is that as far as the changes in the oil market and the developments in financial sector are considered, the findings on the time-varying nature of the predictive power of the financial variables are not unexpected. The second is that the causal relationship between the oil futures returns and the stock markets implies predictive power for both markets. The economic implications of the causal relationship with predictive content should be put under close investigation for efficient markets.