عنوان انگلیسی
Spillover effects of the 2008 global financial crisis on the volatility of the Indian equity markets: Coupling or uncoupling? A study on sector-based data
دانلود فوری مقاله + سفارش ترجمه

Journal : During the 2008 global financial crisis, the volatility of the Indian equity returns has been characterized by huge variations. In this paper we want to examine whether the move from low volatility episodes to higher volatility episodes was triggered by t, Available online 10 July 2013 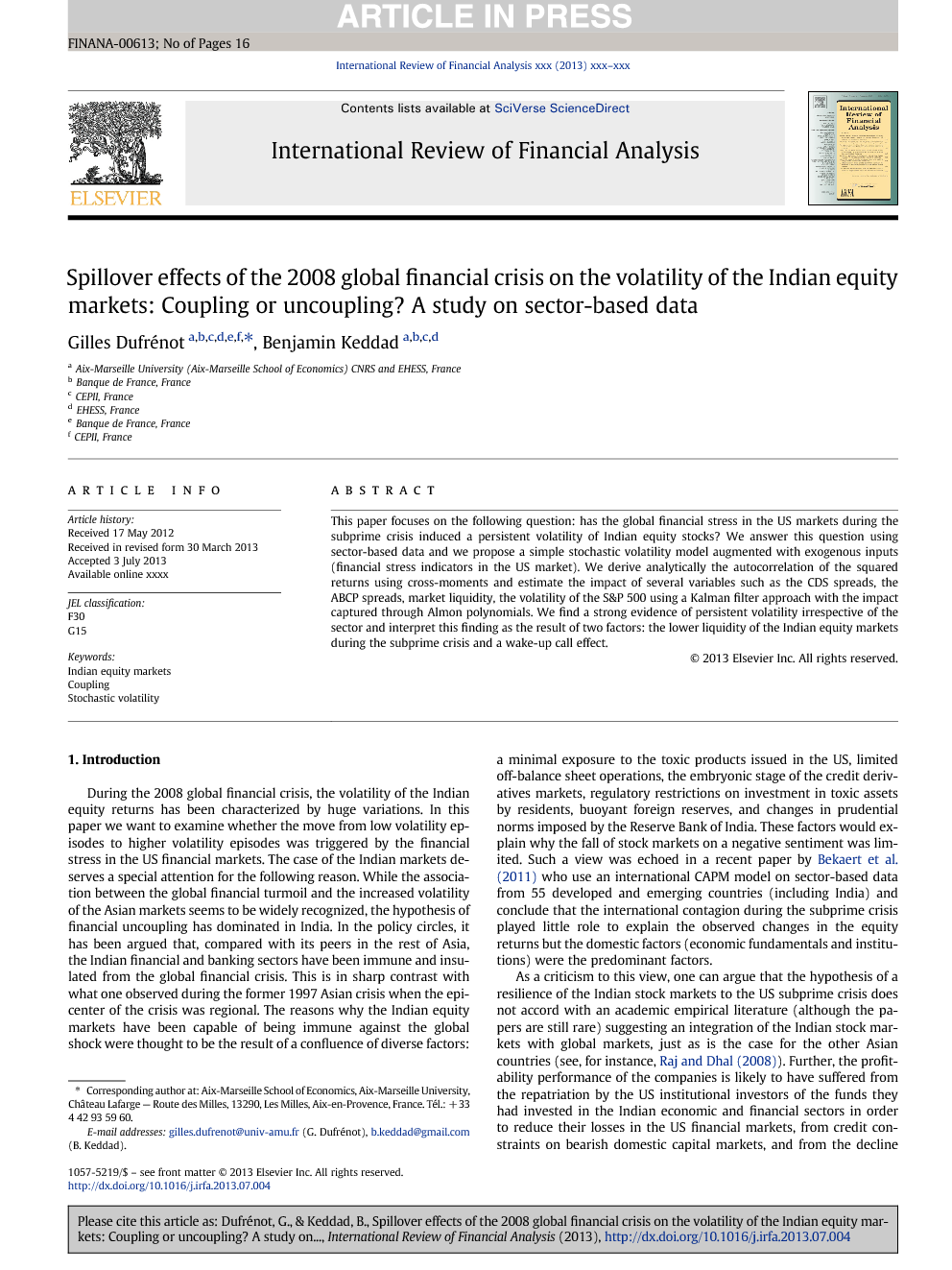 This paper focuses on the following question: has the global financial stress in the US markets during the subprime crisis induced a persistent volatility of Indian equity stocks? We answer this question using sector-based data and we propose a simple stochastic volatility model augmented with exogenous inputs (financial stress indicators in the US market). We derive analytically the autocorrelation of the squared returns using cross-moments and estimate the impact of several variables such as the CDS spreads, the ABCP spreads, market liquidity, the volatility of the S&P 500 using a Kalman filter approach with the impact captured through Almon polynomials. We find a strong evidence of persistent volatility irrespective of the sector and interpret this finding as the result of two factors: the lower liquidity of the Indian equity markets during the subprime crisis and a wake-up call effect.

Our findings play against the hypothesis of uncoupling as far as one considers that the US financial stress indicators have been a source of volatility clustering of the Indian equity returns. Further, we see that in many cases the cumulative multipliers do not vanish after one month of quotation, thereby indicating that the Indian equities have not only been characterized by trading risk (daily risk), but also possibly by the riskiness of investment portfolios (investment risk) because such a risk generally appears when a shock to volatility is persistent over one or several months. Our ARSVX model could be improved in several manners. One possibility could be to consider other distributions for the return innovations. Another would be to consider a long-memory stochastic volatility model with exogenous inputs. Thirdly, it may be interesting to compare the case of India with other emerging Asian markets. Finally, the issue of aggregation is not uninteresting, specifically if we want to see how the observed persistence on sectors would be translated if we considered an aggregate index computed as a weighted average of the individual indices. Would this aggregate index exhibit properties identical to or different from those of the BSE SENSEX index, in terms of conditional volatility clustering? Finally, our ARSVX model could be extended to stochastic explanatory variables by considering for instance the contagion effects stemming from the other Asian markets. This extension would render the estimation methodology less trivial than the Kalman filter, but it would be interesting to see whether India has been impacted by the global financial crisis indirectly through its links with the other regional emerging markets.