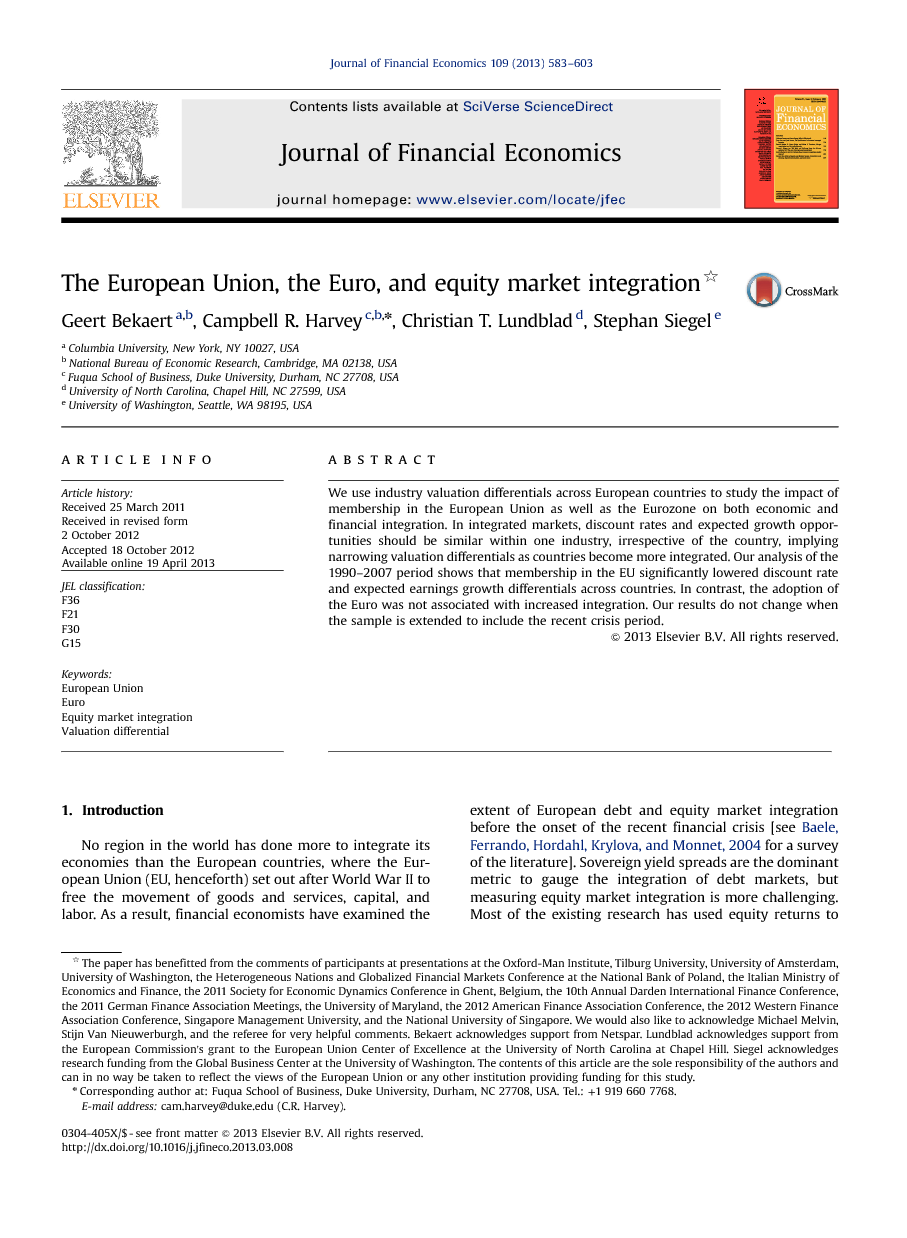 We use industry valuation differentials across European countries to study the impact of membership in the European Union as well as the Eurozone on both economic and financial integration. In integrated markets, discount rates and expected growth opportunities should be similar within one industry, irrespective of the country, implying narrowing valuation differentials as countries become more integrated. Our analysis of the 1990–2007 period shows that membership in the EU significantly lowered discount rate and expected earnings growth differentials across countries. In contrast, the adoption of the Euro was not associated with increased integration. Our results do not change when the sample is extended to include the recent crisis period.

No region in the world has done more to integrate its economies than the European countries, where the European Union (EU, henceforth) set out after World War II to free the movement of goods and services, capital, and labor. As a result, financial economists have examined the extent of European debt and equity market integration before the onset of the recent financial crisis [see Baele, Ferrando, Hordahl, Krylova, and Monnet, 2004 for a survey of the literature]. Sovereign yield spreads are the dominant metric to gauge the integration of debt markets, but measuring equity market integration is more challenging. Most of the existing research has used equity returns to measure the relative importance of an EU return factor (e.g., Hardouvelis, Malliaropulos, and Priestley, 2006), dispersion or correlations trends (e.g., Adjaouté and Danthine, 2004), or the degree of news and volatility spillovers among EU countries (see, e.g., Baele, 2005 and Fratzscher, 2002). A few studies have also investigated quantity-based measures; for example, Jappelli and Pagano (2008) document the degree of home bias over time. We offer a different approach. We use stock market valuations of industry portfolios in different countries to assess the degree of bilateral integration in Europe and the impact of the EU between 1990 and 2007. Stock market valuations reflect financial integration through their impact on discount rates as well as economic integration through their impact on capitalized growth opportunities. As we argue below, integration should lead to “valuation convergence” of similar firms across different countries. In contrast to existing studies on equity market integration, our method is essentially model-free, only requiring valuation ratios and therefore avoiding the joint hypothesis problem plaguing extant studies using equity return data. Valuation ratios also are much less volatile than equity returns allowing more powerful statistical tests. Concretely, we propose absolute differences of earnings yields, the inverse of price-earnings ratios, across industries in different countries, as an easily interpretable segmentation measure. Our focus on valuation has the advantage that it captures the wider impact the EU may have had on integration before the recent financial crisis. For example, increased price competition may have also led to valuation convergence and be driven by EU membership.1 It is, of course, of interest to disentangle discount rate (financial market integration) from cash flow (economic integration) effects. We establish that between 1990 and 2007, EU membership reduced average bilateral earnings yield differentials by about 150 basis points in our most general specification. This is a large change in valuation differences. Using an empirical approach to separately measure expected returns and expected earnings growth rates, we find EU membership led to strong convergence of both, but the effect on discount rates was the largest. We also compare valuation differences in Europe with valuation differences computed from randomized U.S. portfolios, matched by industry composition and the number of firms per industry-country pair, to our European data. At the end of 2007, bilateral valuation differentials within Europe were still significantly above the levels observed in U.S. data, but conditioning on EU membership, they had become indistinguishable from those observed in U.S. data in 2000. Of course, EU membership is not exogenous; country characteristics that increase the likelihood of early EU membership, such as economic and institutional development, may well be correlated with a higher propensity to integrate with other member countries. Moreover, this convergence happened against the backdrop of a global integration process that led to valuation convergence across the world (see Bekaert, Harvey, Lundblad, and Siegel, 2011). However, the strong EU effect we mentioned is conditional on a variety of cross-sectional and temporal controls, including a control for global integration. While it is very difficult to establish causality, the EU effect holds in a difference-in-differences specification that controls for country-pair and year fixed effects. It also survives and becomes even stronger in an instrumental variables regression, where we use the distance to Brussels as an instrument for EU membership. Many of the institutions of the EU are established in Brussels and a larger distance from Brussels slows down EU ascension. While much of the pre-crisis literature has stressed the effects of the introduction of the Euro on integration in Europe, by the end of 2007 we find the Euro did not significantly contribute to integration. Moreover, the EU effect is unchanged when the Euro introduction is added as an extra control. Most of our study focuses on the 1990–2007 sample period, which covers the expansion of the EU across many countries as well as the completion of the “single market” that allows for the free movement of goods, capital, people, and services between EU members and the implementation of a large number of EU directives to harmonize regulation of capital markets and financial services. We also confront the recent Eurozone crisis. We consider a monthly sample that extends the data through July 2012. Given that the crisis is such a massive event, it is reasonable to divide the empirical work into a pre-crisis and extended sample. Our main finding that EU membership increases integration, while Euro adoption does not, is robust using an extended sample that includes the crisis. The remainder of the paper is organized as follows. In Section 2, we present our segmentation measure and characterize its evolution over time. Because the segmentation measure may be affected by temporary fluctuations in valuations and is bounded from below by zero, we establish a benchmark using randomized U.S. portfolios. Section 3 sets out our main regression framework and establishes the main results. In Section 4, we consider potential channels through which EU membership may have affected valuation differentials, examining among others, trade, Foreign Direct Investment (FDI), regulation, financial development, and differences in real interest rates. In Section 5, we provide results based on data that include the recent Eurozone crisis. The final section offers some concluding remarks.

We provide a comprehensive approach to measure financial and economic integration among European countries and to study the effect of joint EU membership on bilateral segmentation. Our measure is based on average industry earnings yield differences and the assumption that, in financially as well as economically integrated markets, industry yields converge. Our main result reveals that between 1990 and 2007, bilateral earnings yield differences were between 80 and 140 basis points lower if both countries were EU members. EU membership significantly lowered both discount rate differentials across countries (financial integration) as well as expected earnings growth rate differentials (economic integration). The independent EU effect survives in an instrumental variables analysis, where we use the distance to Brussels as an instrument for EU membership. We examine several channels through which EU membership could affect equity market integration, but find that they cannot fully account for the EU effect. While a number of interpretations are possible, it is conceivable that there was an independent EU effect that cannot be attributed to a particular measurable channel. Importantly, we find that EU membership, but not Euro adoption, increased financial and economic integration between European countries. That is, equity market segmentation decreased whether or not members also adopted the Euro. Extending our sample period through July 2012 does not alter our main finding that EU membership increases integration, while Euro adoption does not.