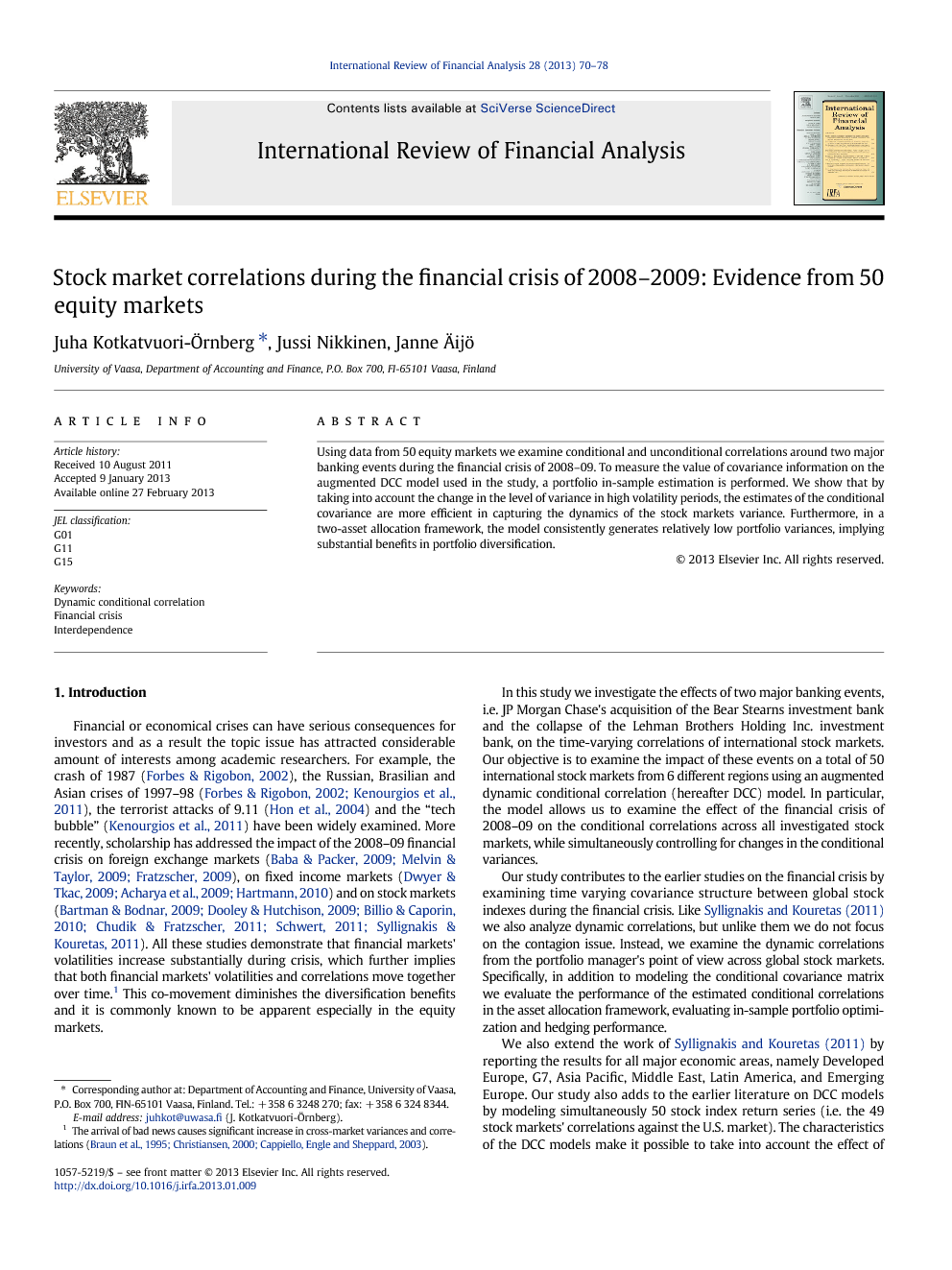 Using data from 50 equity markets we examine conditional and unconditional correlations around two major banking events during the financial crisis of 2008–09. To measure the value of covariance information on the augmented DCC model used in the study, a portfolio in-sample estimation is performed. We show that by taking into account the change in the level of variance in high volatility periods, the estimates of the conditional covariance are more efficient in capturing the dynamics of the stock markets variance. Furthermore, in a two-asset allocation framework, the model consistently generates relatively low portfolio variances, implying substantial benefits in portfolio diversification.

Financial or economical crises can have serious consequences for investors and as a result the topic issue has attracted considerable amount of interests among academic researchers. For example, the crash of 1987 (Forbes & Rigobon, 2002), the Russian, Brasilian and Asian crises of 1997–98 (Forbes and Rigobon, 2002 and Kenourgios et al., 2011), the terrorist attacks of 9.11 (Hon et al., 2004) and the “tech bubble” (Kenourgios et al., 2011) have been widely examined. More recently, scholarship has addressed the impact of the 2008–09 financial crisis on foreign exchange markets (Baba and Packer, 2009, Melvin and Taylor, 2009 and Fratzscher, 2009), on fixed income markets (Dwyer and Tkac, 2009, Acharya et al., 2009 and Hartmann, 2010) and on stock markets (Bartman and Bodnar, 2009, Dooley and Hutchison, 2009, Billio and Caporin, 2010, Chudik and Fratzscher, 2011, Schwert, 2011 and Syllignakis and Kouretas, 2011). All these studies demonstrate that financial markets' volatilities increase substantially during crisis, which further implies that both financial markets' volatilities and correlations move together over time.1 This co-movement diminishes the diversification benefits and it is commonly known to be apparent especially in the equity markets. In this study we investigate the effects of two major banking events, i.e. JP Morgan Chase's acquisition of the Bear Stearns investment bank and the collapse of the Lehman Brothers Holding Inc. investment bank, on the time-varying correlations of international stock markets. Our objective is to examine the impact of these events on a total of 50 international stock markets from 6 different regions using an augmented dynamic conditional correlation (hereafter DCC) model. In particular, the model allows us to examine the effect of the financial crisis of 2008–09 on the conditional correlations across all investigated stock markets, while simultaneously controlling for changes in the conditional variances. Our study contributes to the earlier studies on the financial crisis by examining time varying covariance structure between global stock indexes during the financial crisis. Like Syllignakis and Kouretas (2011) we also analyze dynamic correlations, but unlike them we do not focus on the contagion issue. Instead, we examine the dynamic correlations from the portfolio manager's point of view across global stock markets. Specifically, in addition to modeling the conditional covariance matrix we evaluate the performance of the estimated conditional correlations in the asset allocation framework, evaluating in-sample portfolio optimization and hedging performance. We also extend the work of Syllignakis and Kouretas (2011) by reporting the results for all major economic areas, namely Developed Europe, G7, Asia Pacific, Middle East, Latin America, and Emerging Europe. Our study also adds to the earlier literature on DCC models by modeling simultaneously 50 stock index return series (i.e. the 49 stock markets' correlations against the U.S. market). The characteristics of the DCC models make it possible to take into account the effect of heteroscedasticity on the variance of the fifty return series over the estimation periods. By allowing correlation to change over time, we are able to demonstrate in a portfolio framework that the conditional model estimates outperform simple models. Our empirical findings show that the impact of the Lehman Brothers' collapse resulted in significant increases in correlations, whereas the acquisition of Bear Stearns had negligible effects on correlations. We find that the effect of the Lehman Brothers' collapse on global stock markets is prominent for all the regions, which is evident from both the unconditional and conditional correlation estimates. Furthermore, when evaluating the performance of the conditional correlations in the asset allocation framework, in which portfolio optimization and hedging performance are considered in-sample, we find that the augmented DCC model outperforms all the other models. The augmented DCC model constitutes the lowest portfolio variances within all crisis periods implying that the augmented DCC model is efficient in capturing the dynamics of the stock market variances during high volatility periods.

In this study we investigate the impact of recent financial crises on global stock market interdependence. For this purpose we use data from 50 equity markets and examine the stock market correlations around two significant events, namely around JP Morgan's acquisition of Bear Stearns and the Lehman Brothers' collapse, using an augmented dynamic conditional correlation model. In particular, the model allows us to examine the effect of the financial crisis of 2008–09 on the conditional correlations across all investigated stock markets while simultaneously controlling for changes in the conditional variances. Our conclusion is that while the JP Morgan's acquisition of Bear Stearns had only a negligible impact on stock market correlations across all regions, the effect on interdependence of the Lehman Brothers' collapse was considerable. The results from both the unconditional and conditional correlation analyses suggest that the impact of the financial crisis on stock markets is significant for all regions. The performance of the augmented dynamic conditional correlations model estimates is further analyzed by applying a two-asset portfolio allocation framework. The portfolios' efficiency is estimated in-sample in which the smallest variance in portfolio return is the criterion for success. The results support the assumption that portfolio variance constructed by the DCC model with dummies in the variance equation is the best fitting model in the data and that the model outperforms all the other models within all the investigated time periods. Overall, the differences between the portfolio variances are quite small but consistent. It is evident that including dummy variables in the variance equation improves the model efficiency since they take into account the change in level of variance in high volatility periods. In a two-asset allocation framework, the model generates relatively low portfolio variances within all time periods investigated.