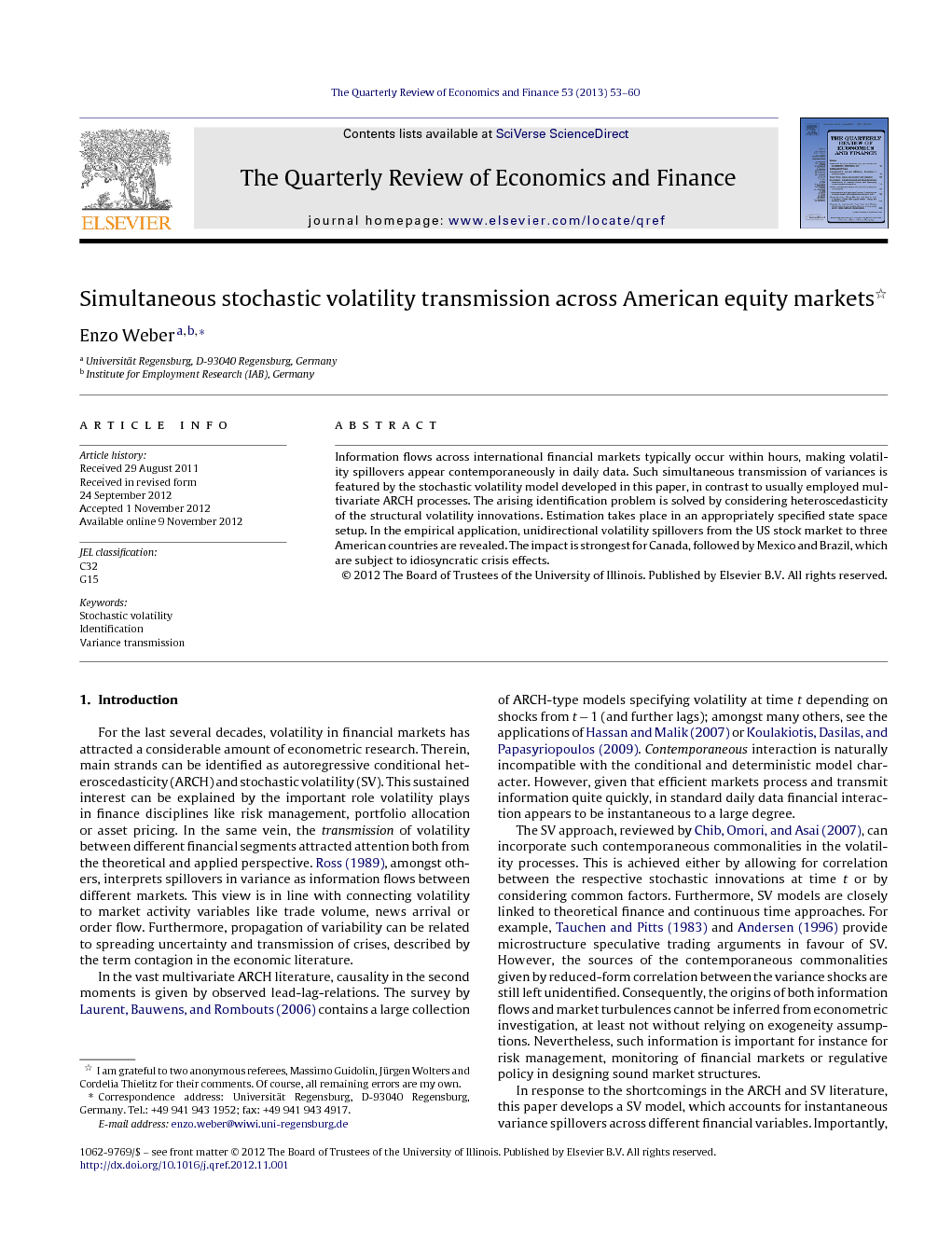 Information flows across international financial markets typically occur within hours, making volatility spillovers appear contemporaneously in daily data. Such simultaneous transmission of variances is featured by the stochastic volatility model developed in this paper, in contrast to usually employed multivariate ARCH processes. The arising identification problem is solved by considering heteroscedasticity of the structural volatility innovations. Estimation takes place in an appropriately specified state space setup. In the empirical application, unidirectional volatility spillovers from the US stock market to three American countries are revealed. The impact is strongest for Canada, followed by Mexico and Brazil, which are subject to idiosyncratic crisis effects.

For the last several decades, volatility in financial markets has attracted a considerable amount of econometric research. Therein, main strands can be identified as autoregressive conditional heteroscedasticity (ARCH) and stochastic volatility (SV). This sustained interest can be explained by the important role volatility plays in finance disciplines like risk management, portfolio allocation or asset pricing. In the same vein, the transmission of volatility between different financial segments attracted attention both from the theoretical and applied perspective. Ross (1989), amongst others, interprets spillovers in variance as information flows between different markets. This view is in line with connecting volatility to market activity variables like trade volume, news arrival or order flow. Furthermore, propagation of variability can be related to spreading uncertainty and transmission of crises, described by the term contagion in the economic literature. In the vast multivariate ARCH literature, causality in the second moments is given by observed lead-lag-relations. The survey by Laurent, Bauwens, and Rombouts (2006) contains a large collection of ARCH-type models specifying volatility at time t depending on shocks from t − 1 (and further lags); amongst many others, see the applications of Hassan and Malik (2007) or Koulakiotis, Dasilas, and Papasyriopoulos (2009). Contemporaneous interaction is naturally incompatible with the conditional and deterministic model character. However, given that efficient markets process and transmit information quite quickly, in standard daily data financial interaction appears to be instantaneous to a large degree. The SV approach, reviewed by Chib, Omori, and Asai (2007), can incorporate such contemporaneous commonalities in the volatility processes. This is achieved either by allowing for correlation between the respective stochastic innovations at time t or by considering common factors. Furthermore, SV models are closely linked to theoretical finance and continuous time approaches. For example, Tauchen and Pitts (1983) and Andersen (1996) provide microstructure speculative trading arguments in favour of SV. However, the sources of the contemporaneous commonalities given by reduced-form correlation between the variance shocks are still left unidentified. Consequently, the origins of both information flows and market turbulences cannot be inferred from econometric investigation, at least not without relying on exogeneity assumptions. Nevertheless, such information is important for instance for risk management, monitoring of financial markets or regulative policy in designing sound market structures. In response to the shortcomings in the ARCH and SV literature, this paper develops a SV model, which accounts for instantaneous variance spillovers across different financial variables. Importantly, causality is not assessed on the basis of conventional approaches relying on lead-lag relations of observed time sequences. Thus, the first contribution lies in formulating a structural-form SV process in contrast to the reduced-form versions proposed in the literature (e.g., Harvey, Ruiz, & Shephard, 1994). Naturally, such a specification creates the problem of identifying the model simultaneity. For this reason, as a second contribution, I take into account ARCH effects in the variances of the structural SV innovations. This time variation in volatility of volatility allows for identifying the contemporaneous structure through heteroscedasticity; see Rigobon, 2002 and Sentana and Fiorentini, 2001 and Weber, 2010a and Weber, 2010b for related approaches in the domain of conditional mean models. In consequence, transmission within single days can be quantified without relying on intraday data, which are barely available for many variables and may be subject to serious microstructure problems (e.g., bid-ask bounce, stale quotes, intraday volatility seasonality). In short, the underlying paper combines several techniques that have been treated separately in the literature: SV, GARCH, structural vector autoregression and identification through heteroscedasticity. This approach is entirely new and solves the problem of quantifying simultaneous volatility spillovers. Eventually, a state space framework is constructed that combines the unobserved SV and ARCH components and paves the way for Quasi Maximum Likelihood (QML) estimation. The model is applied to major stock markets in the US, Canada, Mexico and Brazil, which exhibit large or even perfect overlap in their trading hours. Therefore, addressing volatility spillovers in the conventional way as in Engle, Ito, and Lin (1990) or Melvin and Melvin (2003) is not feasible: these approaches focus on transmission of a single asset's volatility around the globe as different trading places open and close. In contrast, the underlying paper does not rely on such a predetermined time sequence. Namely, the methodology is able to identify unidirectional instantaneous information flows from the S&P 500 to the other American equity exchanges. In terms of variance contributions, it turns out that the US governs 8% of stock market variability in Brazil, 11% in Mexico and 60% in Canada. However, these numbers considerably rise when the turbulent crisis years in the 1990s are excluded. The paper proceeds as follows: the next section introduces the SV model and discusses estimation by QML. The empirical application is put forth in Section 3, and the last section concludes.

This paper proposed a SV model for determining contemporaneous causality-in-variance effects. In a unified approach, volatility factors, instantaneous spillovers and structural SV innovations are estimated. Furthermore, the variances of the latter take ARCH effects into account, so that the model simultaneity can be identified through heteroscedasticity. A state space setup is constructed, which allows handling these components that is unobserved volatility, its innovations and the according conditional variances, by means of Kalman filtering. Notable results are obtained in the application of the methodology to major equity indices of the US, Canada, Mexico and Brazil. The estimations confirm the presence of unidirectional information flows alias volatility spillovers that originate in the US equity market. The ties of Canada to the US prove especially tight. In contrast, Mexico and especially Brazil were subject to a number of more idiosyncratic crisis events in the 1990s, leaving only a subordinate role to the US influence in the determination of overall stock market variability. Accordingly, shortening the sample noticeably increases the dependence on impulses originating in the US. Furthermore, US-related turbulences seem to raise transmission strength, pointing at an important role of contagious effects. In sum, financial information generated and first processed in the US as well as market stress significantly transmit to the foreign countries. Impulses originating in these markets are however more contained, taking the role of idiosyncratic shocks. The present approach bears significant potential for future research. The new element of simultaneous SV spillovers can be combined with more complex models already existing in reduced form, for instance allowing for time-varying correlations, jumps or common factors. Especially the last point would contribute to the model's appeal, since it would overcome the need to explain comovement exclusively by spillovers between the variances of the included variables (see also Weber, 2010c). By the same token, one could obtain economically interpretable SV factor structures that do not suffer from rotational indeterminacy, as it has been encountered for instance by Harvey et al. (1994). Efficiency gains could be realised by replacing the QML method by more recently developed simulation-based estimation techniques. At last, the proposed methodology could be applied to further economic issues such as given in the contagion literature and be compared to causality-in-variance results from multivariate ARCH-type models.