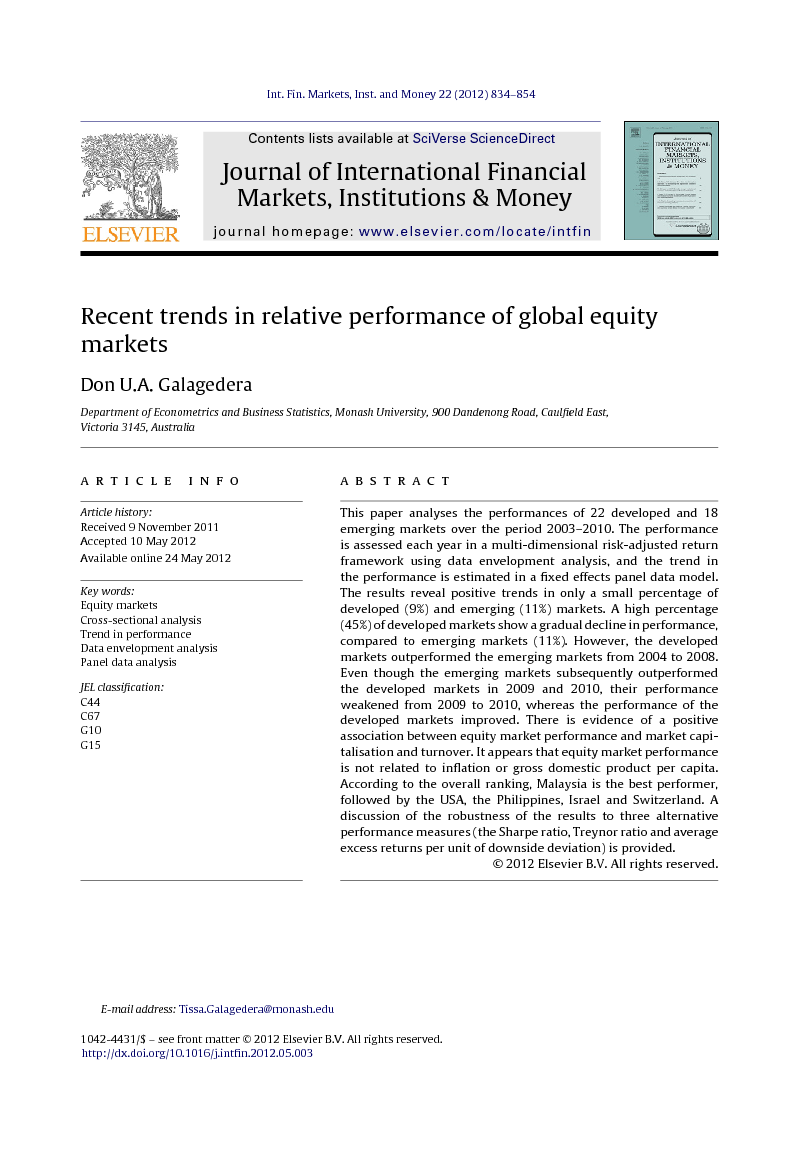 The aim of this article is to assess the performance of a given equity market both relative to the other equity markets in the cross-section and over time. We assess the equity market performance using a nonparametric procedure known as data envelopment analysis (DEA). Conventional ratios measure the performance with only a single input, such as the total risk or systematic risk, and a single output, such as average excess returns. In DEA, we are able to assess the performance by considering several input and several output variables together. This is a clear advantage over the conventional ratio measures of performance. Using the DEA assessed performance scores as the dependent variable in a fixed effects panel data model, we estimate the trend in the performance of each equity market while controlling for market and country specific factors, namely liquidity, size, GDP per capita and inflation. The results from a sample of 22 developed and 18 emerging markets reveal that, over the eight-year period from 2003 to 2010, the emerging markets generally performed better than the developed markets. The trend in the performance is negative in a small percentage (11%) of emerging markets and a high percentage (45%) of developed markets. These markets are widely spread geographically, suggesting that the effects of the recent financial crisis are felt worldwide. On the other hand, only 10% of the markets reveal statistically significant positive trend in performance, of which two are developed markets (Israel and Japan) and the other two are emerging markets (Indonesia and Philippines). These results highlight potential diversification opportunities from the perspective of international investors with long-term investment horizons. Generally, emerging countries are known to offer diversification opportunities because of the empirically observed stylised fact of poor correlation between the returns in the stocks of emerging and developed markets. This study highlights that diversification opportunities may still exist over long investment horizons at the equity market level. In spite of being relatively big, more liquid and well regulated, the majority of the developed markets show a gradual decline in relative performances over the sample period. A cautious conclusion from this evidence is the existence of contagion among developed markets. Even though there is evidence to suggest that market capitalisation and liquidity are associated with the trend in the performance, it is difficult to claim a winning strategy based on them. A viable option for global investors would be to diversify their long-term exposure by investing in a portfolio of developed and emerging equity markets. This is now an attractive option, as all markets may be accessed at a low cost.