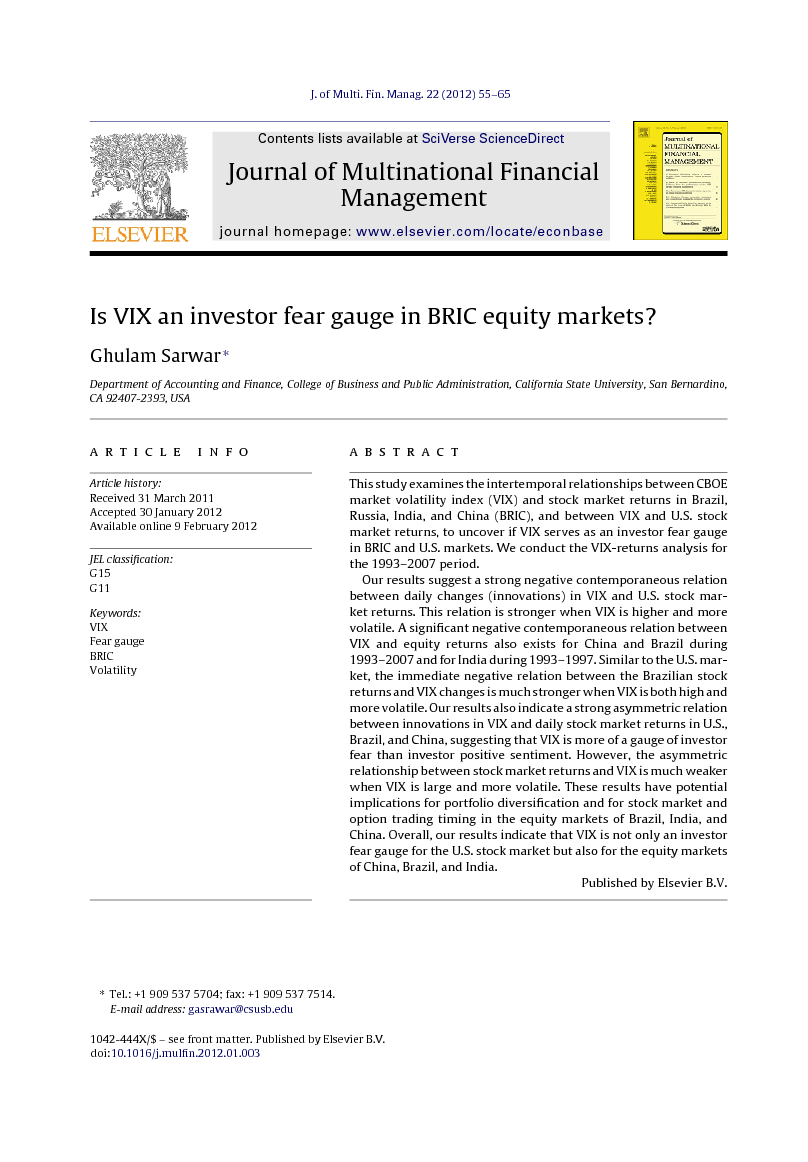 This study examines the intertemporal relationships between CBOE market volatility index (VIX) and stock market returns in Brazil, Russia, India, and China (BRIC), and between VIX and U.S. stock market returns, to uncover if VIX serves as an investor fear gauge in BRIC and U.S. markets. We conduct the VIX-returns analysis for the 1993–2007 period. Our results suggest a strong negative contemporaneous relation between daily changes (innovations) in VIX and U.S. stock market returns. This relation is stronger when VIX is higher and more volatile. A significant negative contemporaneous relation between VIX and equity returns also exists for China and Brazil during 1993–2007 and for India during 1993–1997. Similar to the U.S. market, the immediate negative relation between the Brazilian stock returns and VIX changes is much stronger when VIX is both high and more volatile. Our results also indicate a strong asymmetric relation between innovations in VIX and daily stock market returns in U.S., Brazil, and China, suggesting that VIX is more of a gauge of investor fear than investor positive sentiment. However, the asymmetric relationship between stock market returns and VIX is much weaker when VIX is large and more volatile. These results have potential implications for portfolio diversification and for stock market and option trading timing in the equity markets of Brazil, India, and China. Overall, our results indicate that VIX is not only an investor fear gauge for the U.S. stock market but also for the equity markets of China, Brazil, and India.

The market volatility index (VIX) of the Chicago Board Options Exchange (CBOE) is a popular indicator of future short-term volatility in U.S. equity markets. The VIX is referred to as the investor fear gauge since high levels of VIX have coincided with high degrees of market turmoil in U.S. (Whaley, 2000). The VIX value is computed and disseminated to the investors on a real-time basis just like the information on major stock market indexes. The real-time VIX value offers investors an up-to-the-minute estimate of future one-month stock market volatility in order to make informed asset allocation and portfolio insurance decisions. Whaley (2009) argues that since the S&P 500 index options market is dominated by hedgers who buy index put options when they are concerned about a potential drop in the stock market, VIX is also an indicator of the price of portfolio insurance. The VIX options and futures afford investors viable tools to hedge market volatility. Some investigators advocate the use of VIX as a stock market timing or options trading timing tool (Copeland and Copeland, 1999 and Arak and Mijid, 2006). Most empirical studies on VIX are based on VXO (old VIX) than on VIX (new VIX). Giot (2005) finds that future returns are always positive (negative) after very high (low) levels of VXO, suggesting that high levels of VXO indicate oversold markets. Dash and Moran (2005) show that VXO is negatively correlated to hedge fund returns and this correlation profile is asymmetric. Guo and Whitelaw (2006) find that market returns are positively related to implied volatilities. Blair et al. (2001) demonstrate that VXO contains nearly all relevant information about the future realized volatility of index returns. Fleming et al. (1995) find a large negative contemporaneous correlation between VXO changes and S&P 100 index returns, suggesting an inverse relation between VXO and stock market prices. Guo and Wohar (2006) find significant structural breaks (regime shifts) in the mean levels of VXO and VIX at three distinct periods: pre-1992, 1992–1997, and post-1997. Hong and Stein (1999) and Daniel et al. (1998) find that stock market returns may behave differently depending on the state of the market. A separate body of empirical literature, known as the spillover studies, examines the short-run transmission of information between the U.S. and foreign financial markets. This literature provides evidence of short-term interdependence of prices and price volatilities across the Tokyo, London, and New York stock markets (Hamao et al., 1990 and Shiller et al., 1991), international bear-market contagion (King and Wadhwani, 1990), and information transmission among the returns of the U.S., Japanese, and German stock markets (Peiro et al., 1998 and Baur and Jung, 2006). The spillover studies find support for long-term interdependence between developed equity markets and Balkan equity markets (Syriopoulos, 2011) and transmission of information from the cross-listed stocks in developed markets to domestic stock returns and volatilities (Jaiswal-Dal and Jithendranathan, 2009). Furthermore, studies suggest linkages between the returns and volatility of the NASDAQ and Asian second board markets (Lee et al., 2004) and spillovers in prices and volatilities between the U.S. and major foreign markets (Bennett and Kelleher, 1988, Becker et al., 1990 and Susmel and Engle, 1990). However, none of the spillover studies specifically examine the linkages between VIX and foreign stock market returns or investigate if the VIX acts as an investor fear gauge in foreign equity markets. Although VIX is now widely recognized as an investor fear gauge in the U.S. equity markets (Whaley, 2000, Ghosh, 2009, Fleming et al., 1995 and Chicago Board Options Exchange, 2009), the role of VIX as an investor fear gauge in foreign equity markets has received little or no attention in empirical studies. This paper bridges this gap in the literature and examines if VIX serves as an investor fear gauge in the equity markets of Brazil, Russia, India, and China (BRIC). The BRIC equity markets experienced extremely high growth in 2007 which briefly transformed the Chinese (Shanghai and Shenzhen) and Indian (Bombay and NSE) stock markets to the fourth and fifth largest world equity markets at the end of 2007 (World Federation of Exchanges, 2008 and Merrill Lynch, 2008). Because Guo and Wohar (2006) report significant structural breaks (regime shifts) in the mean levels of VIX, we also investigate if these structural shifts in VIX have strengthened the role of VIX as an investor fear gauge in U.S. and BRIC equity markets. Our study is similar in spirit to Fleming et al. (1995) and Whaley (2000) who examined VXO (old VIX) and S&P 100 returns until 1992. We cover instead the period since 1992 and examine the intertemporal relationships between VIX and BRIC returns and between VIX and S&P 500 returns. Our study period covers the post-1993 period of structural breaks in VIX as documented in Guo and Wohar (2006), and the time period when VIX futures and options were available to traders to hedge market volatility.