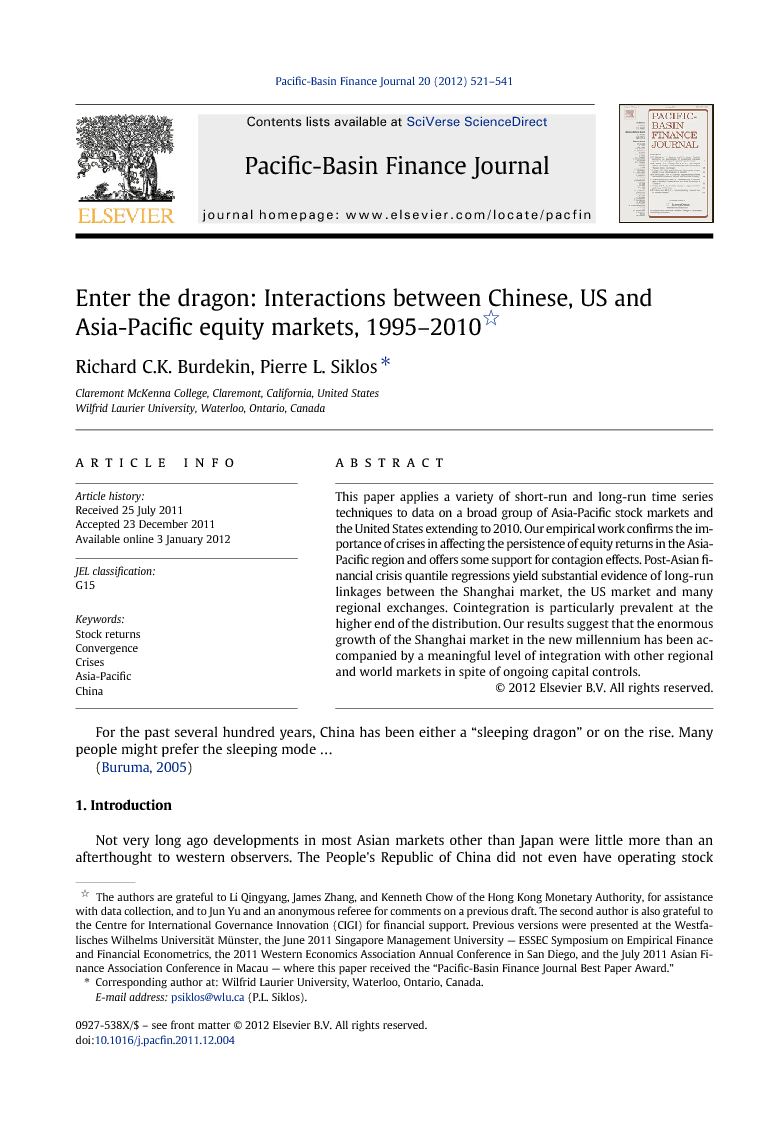 This paper applies a variety of short-run and long-run time series techniques to data on a broad group of Asia-Pacific stock markets and the United States extending to 2010. Our empirical work confirms the importance of crises in affecting the persistence of equity returns in the Asia-Pacific region and offers some support for contagion effects. Post-Asian financial crisis quantile regressions yield substantial evidence of long-run linkages between the Shanghai market, the US market and many regional exchanges. Cointegration is particularly prevalent at the higher end of the distribution. Our results suggest that the enormous growth of the Shanghai market in the new millennium has been accompanied by a meaningful level of integration with other regional and world markets in spite of ongoing capital controls.

Not very long ago developments in most Asian markets other than Japan were little more than an afterthought to western observers. The People's Republic of China did not even have operating stock markets until December 1990 and most other Asian exchanges seemingly remained too limited in size to exert any meaningful influences on the United States or other major western financial centers. The 1997–1998 Asian financial crisis brought home how interconnected the world had become, however, as the collapse of the Thai baht's peg with the US dollar in July 1997 exerted shockwaves around the world. Although the most devastating moves occurred in neighboring East Asian economies like Indonesia and Malaysia, which had shared Thailand's reliance upon a dollar peg, major market moves were also seen in the United States and other western markets. Mainland China's own financial markets were aided by capital controls that helped shield the economy from the worst of the Asian financial crisis. 1 The extraordinary growth since that time is reflected in the Shanghai Stock Exchange ranking sixth in the world (based on domestic market capitalization) in 2009, just behind the London Stock Exchange. In May 2007 former Federal Reserve Chairman Alan Greenspan was already expressing concern that there had been too much of a good thing, stating that the Chinese market gains were becoming “unsustainable” and that a “dramatic correction” was inevitable (see Lima and Kennedy, 2007). While Greenspan's view actually seemed to receive some initial vindication a few months later, it is telling that the market was garnering such worldwide attention in the first place. Although Authers (2010, p. 2) refers to the “Shanghai Surprise” to describe what happened in world stock markets on February 27, 2007, when the Shanghai Composite Index fell by over 9% in a day while the S&P 500 fell by more than 3%, he is surely incorrect in arguing that this event “marked the start of the worst global financial crisis for at least 80 years, …”. On the contrary, the Shanghai Stock Exchange went on to enjoy a 96% rise in 2007 (after having already doubled in 2006), peaking at the end of October 2007 months after most western stock markets had begun falling in the face of the credit crunch that manifested itself over the summer. Indeed, while the subsequent collapse of the Shanghai market index from above 6000 in October 2007 to below 2000 in October 2008 was even more dramatic than the declines seen in most major world markets, the broad sequence of events hardly suggests the Shanghai market played any part in signaling the start of the global financial crisis. 2 Nevertheless, there is something to be said that the events in China represented a ‘wake-up’ call to financial markets worldwide. 3 The integration of mainland China's financial markets with other world markets remains very much an open question. For example, continued capital controls and restrictions on foreign entry into China's financial markets and limitations on purchases of offshore securities by local Chinese investors have been associated with ongoing price differentials between the share prices of mainland Chinese companies in Shanghai vs. their prices in Hong Kong and New York (cf, Arquette et al., 2008). Such differentials have persisted even for the sizeable, and highly liquid, large Chinese state-owned banks that had IPOs in Hong Kong during 2005–2006 (Burdekin and Yang, in press), seemingly lending support to ongoing claims that the Shanghai market is segmented even from Hong Kong (cf, Wang and Jiang, 2004 and Chong and Su, 2006). This paper seeks to shed new light on the degree of Asia-Pacific financial market integration, and the actual extent to which Shanghai has become more linked with other markets, by examining short-run and long-run relationships between stock returns. Although there is already a large literature bearing on the question of financial market integration, past work has generally neither offered a comprehensive examination of the group of Asia-Pacific markets nor included data extending through the onset of the global financial crisis. 4 Such an analysis seems overdue given the higher profile of the Asia-Pacific region driven not only by the growth in the Chinese markets but also a general rise in financial market integration on a global scale that has helped make regional developments more relevant to the west. 5 This has been accompanied by an intensification of trading within the Asia-Pacific region itself, some efforts at policy coordination (e.g., the Chiang Mai initiative), and improved trading technology. The ongoing global financial crisis only reinforces the importance of understanding the links between equity markets, particularly between the seemingly more resilient Asia-Pacific markets and the United States. It is these linkages, both short-term and long-term, that are the focus of our empirical work. Our econometric analysis confirms the importance of shifts in market behavior during crisis periods while also suggesting that the evidence for contagion-type effects remains very much dependent on which market group one examines. For example, notwithstanding considerable evidence of contagion-type effects between the mature Asia-Pacific markets and those of the emerging variety, there is virtually no evidence of contagion between the benchmark markets of the United States and Japan and the more mature regional markets such as Australia, Hong Kong and Korea. The Shanghai market plays a significant role in influencing many other regional markets over our 1995–2010 sample period, with its growing influence clearly evident in the sharply rising conditional correlation of returns around the outbreak of global financial crisis in 2007 — just as the US market's relationship with the Asia-Pacific equity markets falls off. Meanwhile, long-run links between these stock markets over the post-Asian financial crisis period are seen to be highly sensitive to the actual size of returns. When returns are relatively high, an oft seen feature of the Shanghai market in recent years, this pulls several other markets in the same direction. As restricting attention to the means of the distribution would not offer a full or accurate picture of how and whether stock returns move together in this case, we also employ quantile cointegration analysis to examine the long-run market interrelationships.

This paper's empirical work applies a variety of short-run and long-run econometric techniques to a broad group of Asia-Pacific stock markets and the United States over the 1995–2010 period. Our empirical work confirms the importance of crises in affecting the persistence of equity returns in the Asia-Pacific region but yields only limited support for contagion effects. There is evidence of contagion extending to the US market from the Malaysian, Taiwanese and Thai markets, however, while instances of contagion within the region include transmission between Shanghai and the Malaysia and Thai markets. Dynamic conditional correlations suggest rising co-movement among all the Asia-Pacific markets over time that accelerates after the onset of the global financial crisis in 2007, just as the US market seems to decouple from the regional markets. It will be interesting to see if subsequent data confirm whether this apparent move away from US leadership is just a temporary phenomenon or is signaling a more enduring shift in the pole of influence. Our tests for long-run cointegrating relationships utilize a post-Asian financial crisis sample of 1999–2010 and employ quantile regression techniques to allow for variation over the spectrum of the return distributions. The tendency for emerging market stock return data, such as that of the volatile Shanghai market, to be concentrated at the higher end of the distribution means that conventional cointegration analysis may be unreliable as it focuses only on the means. In contrast to Huyghebaert and Wang (2010), whose standard cointegration analysis suggests continued isolation of the mainland Chinese markets, we find substantial evidence of integration of the Shanghai market with the US market and many regional exchanges. Cointegration is particularly prevalent at the higher end of the distribution. Our results suggest that the enormous growth of the Shanghai market in the new millennium has indeed been accompanied a meaningful level of integration with other regional and world markets in spite of the capital controls that continue to be imposed by the Chinese government. 23