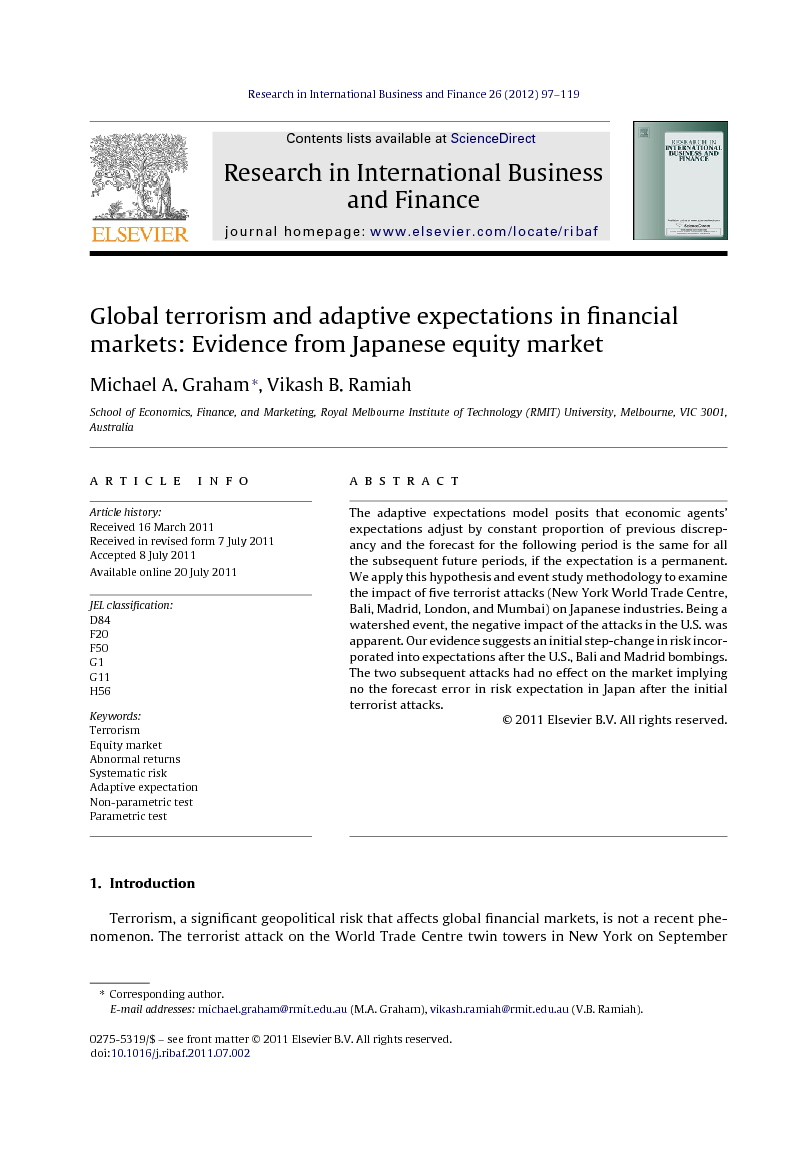 The adaptive expectations model posits that economic agents’ expectations adjust by constant proportion of previous discrepancy and the forecast for the following period is the same for all the subsequent future periods, if the expectation is a permanent. We apply this hypothesis and event study methodology to examine the impact of five terrorist attacks (New York World Trade Centre, Bali, Madrid, London, and Mumbai) on Japanese industries. Being a watershed event, the negative impact of the attacks in the U.S. was apparent. Our evidence suggests an initial step-change in risk incorporated into expectations after the U.S., Bali and Madrid bombings. The two subsequent attacks had no effect on the market implying no the forecast error in risk expectation in Japan after the initial terrorist attacks.

4. Conclusion The literature generally notes that terrorism and military attacks increase the cost of doing business because of added security and increased risks. Whilst the market reaction as a whole has been extensively studied, only a handful of papers have looked into the specific sectors and the impacts of terrorism on foreign countries on domestic securities. Even then, only the banking and airline industries have been extensively studied. Additionally, the extant literature shows a dearth of studies on the terrorist attacks after September 11. In this paper, we utilise the adaptive expectations hypothesis and event study methodology to assess the impact of these terrorist attacks all Japanese industrial sectors. Of the five recent terrorist attacks studies, our results show that the events of September 11 had the greatest effect on the Japanese market. The majority of the industries were down on the first trading day, and fifty percent of the industries were still negatively affected five days after the event. We also demonstrate an increase in systematic risk of these sectors in both the short run and long run following the attacks on the twin towers in New York. On the other hand, we find that the Japanese sectors were insensitive to the later terrorist attacks in Mumbai and London bombings. We interpret that to mean no new information on terrorist risk from these terrible events. There was an initial step-change in risk which was incorporated into expectations after the U.S., Bali and Madrid bombings. The evidence from the subsequent attacks imply there was no the forecast error in risk expectation in Japan after these three attacks.