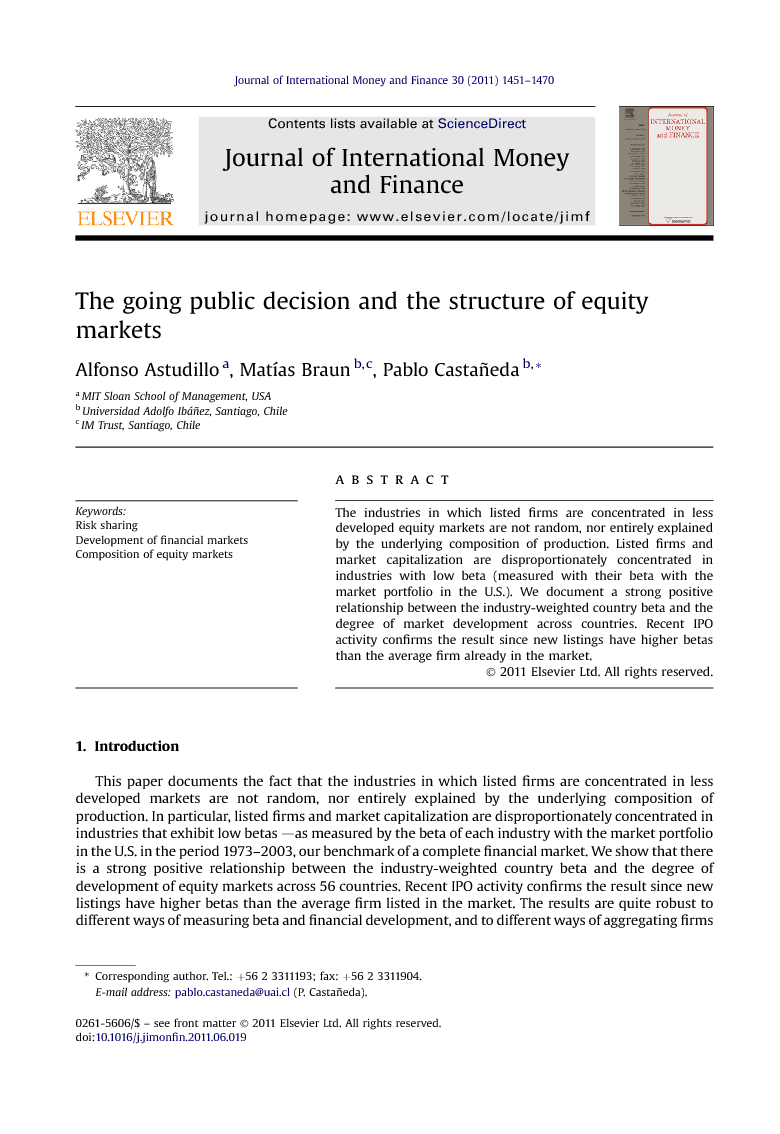 The industries in which listed firms are concentrated in less developed equity markets are not random, nor entirely explained by the underlying composition of production. Listed firms and market capitalization are disproportionately concentrated in industries with low beta (measured with their beta with the market portfolio in the U.S.). We document a strong positive relationship between the industry-weighted country beta and the degree of market development across countries. Recent IPO activity confirms the result since new listings have higher betas than the average firm already in the market.

This paper documents the fact that the industries in which listed firms are concentrated in less developed markets are not random, nor entirely explained by the underlying composition of production. In particular, listed firms and market capitalization are disproportionately concentrated in industries that exhibit low betas —as measured by the beta of each industry with the market portfolio in the U.S. in the period 1973–2003, our benchmark of a complete financial market. We show that there is a strong positive relationship between the industry-weighted country beta and the degree of development of equity markets across 56 countries. Recent IPO activity confirms the result since new listings have higher betas than the average firm listed in the market. The results are quite robust to different ways of measuring beta and financial development, and to different ways of aggregating firms into industries. Results are also robust to controlling for economic development and industrial composition, and to sample selection issues, as well as to other factors. Alternative explanations related to country and industry characteristics do not explain the results away. Our findings are consistent with rational listing decisions in a standard CAPM-pricing context, where the listing decision depends upon the trade-off between diversification (Pagano, 1993, Benninga et al., 2005 and Pástor et al., 2009) and private benefits of control (Dyck and Zingales, 2004). Alternatives factors related to the value of a firm (e.g., size, growth opportunities, etc.) are also consistent with our findings. Our paper brings three strands of literature together: financial development, composition of stock markets, and listing decisions. Regarding the first, it has been well documented that the development of financial markets varies widely across countries and in time (Goldsmith, 1969, King and Levine, 1993a, King and Levine, 1993b and Rajan and Zingales, 2003). The cross-sectional determinants of this variation are relatively well understood, and have been mapped to the protection of creditors and investors, and the quality of the available information (La Porta et al., 1997, La Porta et al., 1998 and Rajan and Zingales, 1998). However, the time series determinants have been far less researched (although see Rajan and Zingales, 2003 and Braun and Raddatz, 2007). As for the mechanisms through which financial markets develop, the literature has even less to say. This paper contributes most to these two issues by proposing a plausible mechanism through which stock markets may develop in time. The story is theoretically plausible and has strong empirical content. A good knowledge of the mechanics is particularly relevant when designing policies to foster financial development. The industrial composition of listed companies also varies across countries, and some less developed exchanges exhibit high concentration. These differences in composition are important, for instance, when interpreting and explaining the properties of country index returns (see, among others, Lessard, 1974, Roll, 1992 and Heston and Rouwenhorst, 1994), or when exploring the benefits of global diversification as in Griffin and Karolyi (1998). This paper adds to this literature by showing that both the degree of concentration and the composition vary systematically with the development of equity markets. The IPO literature has made important advances in documenting the rationality of the listing decision (for a survey, see Ritter and Welch, 2002), and it has been extended to the cross-listing decision of emerging market firms and stock market liberalization (Chari and Henry, 2004, Martell and Stulz, 2003 and Bekaert and Harvey, 2003). In theory, we now know that new listings may produce positive externalities because they increase risk sharing opportunities (Pagano, 1993), or because they provide the market with information about non-listed companies (Subrahmanyam and Titman, 1999). These effects are likely to be dependent on the composition of the market. Empirically, there is indeed an effect of new listings on the relative prices of the firms already in the market (Shleifer, 1986, Braun and Larrain, 2009 and Hsu et al., 2010). This paper provides a joint evolution of the industrial composition of the stock market that is consistent with rational listing choices, and that generates effects on the prices of other firms. We also explore the consequences of these effects for the shape of the market at different stages of development. In this sense this paper is related to recent work by Chemmanur et al. (2010) and Boot et al. (2008) that shows how the incentives for listing are modified in time (the former), and across critical market characteristics such as liquidity and participation (the latter). Of course the determinant for the listing decision we focus on here is not the only one. There is literature that tries to explain, at the micro level, what the determinants of the public decision to go public are. Among others, these may be related to asymmetric information and evaluation costs (Chemmanur and Fulghieri, 1999), competition and the revelation of confidential information (Bhattacharya and Ritter, 1983 and Maksimovic and Pichler, 1994), competition and innovation (Spiegel and Tookes, 2007), and productivity and fixed costs (Clementi, 2002). We look at some of these other determinants as alternative explanations for our results. The remainder of the paper is organized as follows. Section 2 shows that the economic composition does not entirely explain the market composition of a country and the differences in composition between highly and less developed equity markets. Section 3 presents the data, our main results, and the robustness checks. Here we also contrast our results with alternative explanations existing in the present literature. Section 4 briefly concludes.

We document a strong positive relationship between the level of equity market development and the country beta relative to a complete market benchmark. This relationship holds across countries and is not completely explained by the underlying composition of production. This relationship suggests that markets develop from low to high beta industries. The results suggest at least two novel effects that we feel are worth testing and further exploring. First, they imply that expected relative returns (and relative market prices) do change (in predictable ways) with the state of development. Second, they point to the possibility that the decision to go public is perhaps not as simple as typically thought, but has important dynamic considerations. Regarding financial development literature, we move from the critical issues of documenting that markets are differently developed and asking why this is so, to the issue of how they develop. Focusing on the mechanism, the paper contributes to complementing the policy implications suggested by the literature. Improving investor protection and diminishing informational asymmetries certainly helps but would not be enough to trigger development in the presence of a listing decision that is this elaborate. Furthermore, the inherent dynamic externality behind the development process opens the doors to policy interventions that go well beyond providing the basic contracting and property rights institutions. Finally, our results also provide a new measure of stock market development that may be useful for future research in the area. We show that our measure is similarly correlated to other variables that are typically thought to proxy for the deep determinants of financial development. Unlike the traditional measures, however, this one is not based on the size of the market and is well-grounded on one (albeit particular) mechanism through which markets would develop.