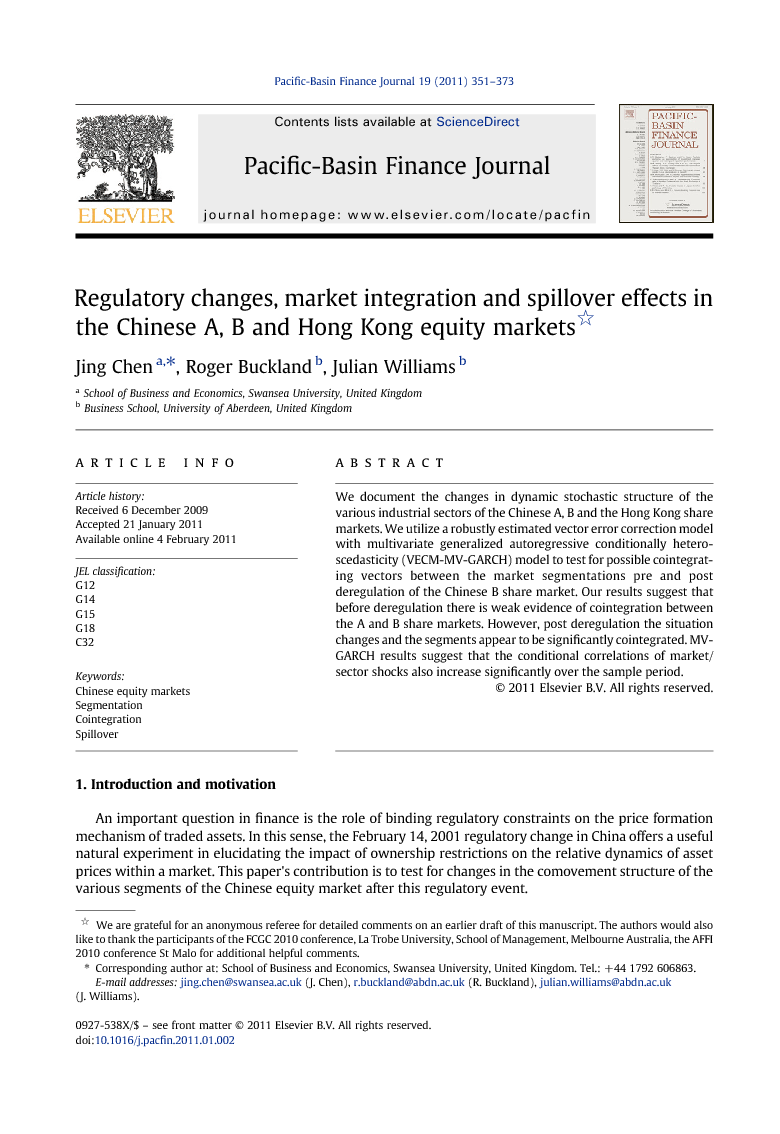 We document the changes in dynamic stochastic structure of the various industrial sectors of the Chinese A, B and the Hong Kong share markets. We utilize a robustly estimated vector error correction model with multivariate generalized autoregressive conditionally heteroscedasticity (VECM-MV-GARCH) model to test for possible cointegrating vectors between the market segmentations pre and post deregulation of the Chinese B share market. Our results suggest that before deregulation there is weak evidence of cointegration between the A and B share markets. However, post deregulation the situation changes and the segments appear to be significantly cointegrated. MV-GARCH results suggest that the conditional correlations of market/sector shocks also increase significantly over the sample period.

An important question in finance is the role of binding regulatory constraints on the price formation mechanism of traded assets. In this sense, the February 14, 2001 regulatory change in China offers a useful natural experiment in elucidating the impact of ownership restrictions on the relative dynamics of asset prices within a market. This paper's contribution is to test for changes in the comovement structure of the various segments of the Chinese equity market after this regulatory event. China's equity security markets are divided into three geographic and three broad share classes. The geographic segmentations are the Shanghai Stock Exchange, Shenzhen Stock Exchange and Hong Kong Stock Exchange.1 Broadly, share classes are denoted as follows: mainland Chinese firms can issue stock in A shares, which are domestically owned, traded and denoted in Chinese domestic currency; and/or in B shares, denoted in US$ or HK$. Until February 2001 B shares were available only to overseas investors, after which ownership rules were relaxed to permit domestic investors with foreign currency to purchase B shares. Finally, Hong Kong shares are traded on the Hong Kong stock exchange and include enterprises incorporated in mainland China and listed on the Hong Kong stock exchange.2 In addition to A and B shares a Chinese firm may also issue state shares, legal person shares and employee shares. However, only the A and B shares are actually traded, with the A share market perceived as being the most liquid. Our tests seek to answer three questions: first, do the stock indices representing the overall market and sector levels have long run relationships between them, and does the significance of these long run relationships change after the regulatory change of February 14, 2001? Second, what is the price discovery direction of information shocks? Lastly, how does the transmission mechanism that propagates these shocks change through time? We employ a general multivariate linear VECM framework with dynamic second moments, characterized by a MV-GARCH model. This modeling setup permits diagnostic testing for long run cointegrating relationships between the log price processes; it builds impulse response models of returns to delineate the direction of information in the market; and finally it computes time varying factor loadings from the dynamic covariance matrices, in order to isolate the structural decomposition of the instantaneous shock transmission mechanism. Between February 14 and 19, 2001 the Chinese securities and regulatory commission (CSRC) relaxed the ownership rules on the B share market. This paper's contribution is the implementation and exposition of tests for changes in the various dynamic relationships between the A, B and Hong Kong shares after the 2001 regulatory changes, detecting if the direction of price discovery has been affected by the adjustment in the ownership mix of the B share markets. We construct VAR models of the market and of nine sector indices (by single digit SIC codes) and estimate these models over the periods January 1, 1993 to February 13, 2001 and February 14, 2001 to May 1, 2009, as well as for the whole sample period January 1, 1993 to May 1, 2009. We test for cointegration using a robust version of the VECM/Johansen FIML approach and then, using the stationary returns series, we assess the direction of shocks within the system. In our next step, we further decompose the market at the sector level to apply the VAR and the time varying factor loading frameworks: first, over two time periods, partitioned around the B share market policy change in 2001; and, second, tested against the whole time period for robustness. Specifically our data set consists of the Consumer Goods, Consumer Services, Financials, Industrials, Oil and Gas, Technology, Telecom, Basic Material and Utilities sectors as well as the overall market (Figure 1).

A large body of literature on the segmentation of the Chinese stock market has focused on the B share pricing discount issue, in respect of the information transmission between the mainland segments and Hong Kong and the associated volatility spillover effects. Prior to 2001 the A share market is considered to be the price leader to the B share market; however, post 2001 the almost uniform opinion is that this has become at least bi-directional; and there is some evidence to suggest that it may even have reversed. Our contribution to the literature in this area is three-fold: first we have included a further dimension of the Chinese equity market, namely Hong Kong; second we have then decomposed the market segments to the overall market and sector levels; finally our methodology employs a robust VECM-MV-GARCH framework to test for long run cointegrating relationships, the covariance/factor loading structure of shocks and the direction of the shock transmission process in the stationary component (returns), via impulse response. Overall, the results align themselves to a fairly consistent story that the regulatory reform of February, 2001, which relaxed the ownership laws on B share assets, marks a significant change in the autoregressive and concurrent covariance structure of the various parts of the Chinese and Hong Kong equity market. Not only are the long run relationships much more stable in terms of direction, the covariance structure has changed, such that shocks are now far more highly correlated and the transmission mechanism of shocks results in a more rapid convergence of the markets. As previously stated, the price discovery function of the A share market appears to have all but disappeared, replaced by a more complex shock transmission mechanism that interrelates the various components of the market in a far more complex manner (as illustrated by the IRFs). This change in the structure appears to have closed some of the arbitrage opportunities that were previously created by the investor bottleneck stemming from the ownership regulations. The introduction of clearance of stocks in domestic currency, currently being introduced in 2009, will offer another interesting natural experiment, in addition to that created by the 2001 regulatory change. In light of the very significant crisis that has occurred over the sample period the emergence of the signals from this regulatory change is quite significant and suggests that representative investor models may not be able to fully explain the dynamics of the comovement of assets within equity markets. Future work will concentrate on the more high frequency shock transmission among market segments and the wider stability of the financial sector. To this end we aim to include measures of financial stability to serve as instruments to explain more of the shock transmission structure between the global and domestic Chinese equity market segments. Finally, our multi-faceted approach and methodological innovations will be of use in other studies of similar segmented markets.