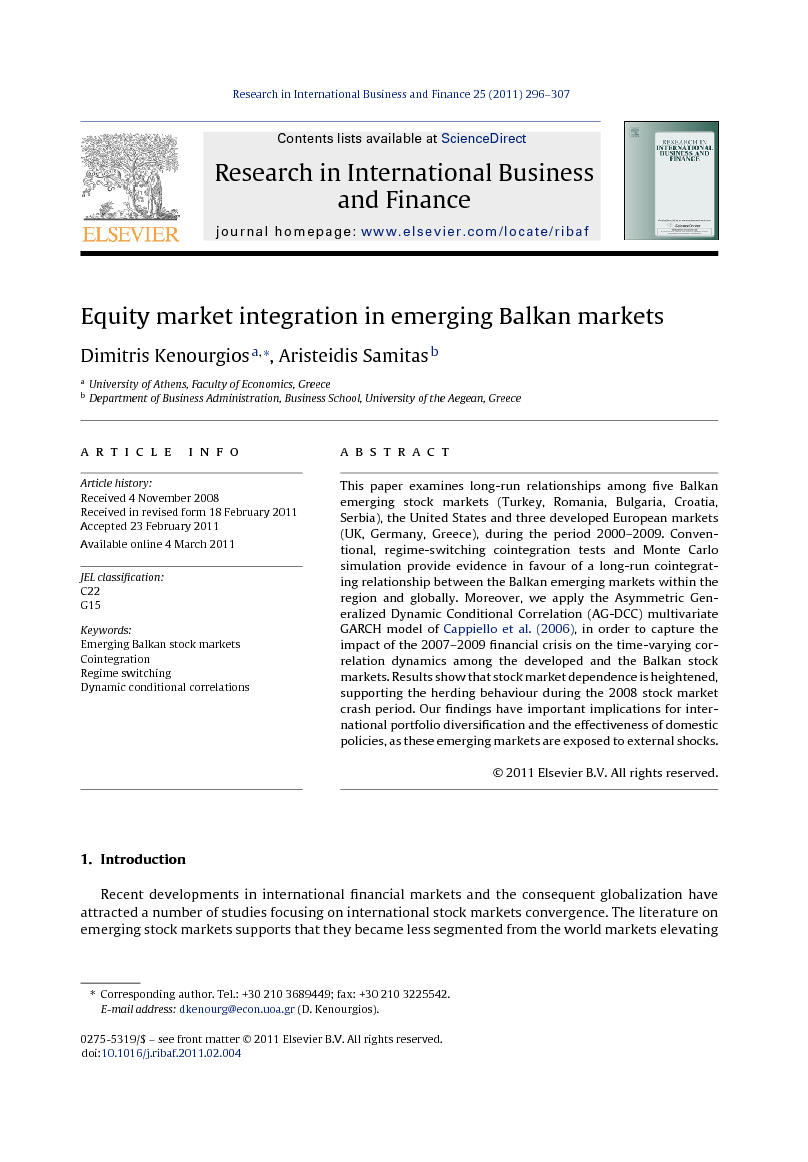 This paper examines long-run relationships among five Balkan emerging stock markets (Turkey, Romania, Bulgaria, Croatia, Serbia), the United States and three developed European markets (UK, Germany, Greece), during the period 2000–2009. Conventional, regime-switching cointegration tests and Monte Carlo simulation provide evidence in favour of a long-run cointegrating relationship between the Balkan emerging markets within the region and globally. Moreover, we apply the Asymmetric Generalized Dynamic Conditional Correlation (AG-DCC) multivariate GARCH model of Cappiello et al. (2006), in order to capture the impact of the 2007–2009 financial crisis on the time-varying correlation dynamics among the developed and the Balkan stock markets. Results show that stock market dependence is heightened, supporting the herding behaviour during the 2008 stock market crash period. Our findings have important implications for international portfolio diversification and the effectiveness of domestic policies, as these emerging markets are exposed to external shocks.

Recent developments in international financial markets and the consequent globalization have attracted a number of studies focusing on international stock markets convergence. The literature on emerging stock markets supports that they became less segmented from the world markets elevating the benefits of economic growth created via improvements in allocational efficiency and reductions in macroeconomic volatility (e.g., Baele et al., 2004). Cointegration methodology developed by Engle and Granger (1987) and Johansen (1988) has been adopted in a numerous studies investigating the long-run relationships between international stock markets. These studies have traditionally focused on European and US mature equity markets, Asian and Latin American emerging markets and to a lesser extent on Central European stock markets, providing evidence on long-run interrelationships.1 However, the long-run stable equilibrium relationships conjectured by these techniques are not suitable for modeling the dynamic process of stock market integration as it is incomplete and continues to exhibit strong variations over time.2Campos et al. (1996) and Gregory and Hansen (1996) find that the time-varying relations along with some structural breaks are possible to deteriorate the power of cointegration tests, rejecting the null hypothesis of cointegration. Hence, their methodology takes into account the possibility of instability in short-run relations. Furthermore, their research based on Monte Carlo simulation technique verifies that when a shift in parameters takes place, standard test for cointegration lose power and provides false signals. Despite the extensive use of Johansen and Gregory–Hansen cointegration tests on the examination of international equity market integration, scholars have been also using generalized autoregressive conditional heteroskedasticity (GARCH) family models to avoid the restriction of constant volatility implied by the aforementioned methodologies. A large body of literature applies several variants of GARCH models to accommodate the possibilities of non-normalities and asymmetries in the variance of returns (e.g., Bekaert et al., 2002 and Baele, 2005). However, most of the GARCH family models assume that correlation coefficients are constant over the sample period, while their multivariate variants suffer from the curse of dimensionality. Recently, two more advanced GARCH models have been developed. Engle (2002) develops a dynamic conditional correlation (DCC) GARCH model, which allows conditional asymmetries in both volatilities and correlations in a time-varying framework. Furthermore, Cappiello et al. (2006) extend the original model of Engle (2002) and use the asymmetric generalized dynamic conditional correlation (AG-DCC) model to investigate asymmetries in conditional variances and correlation dynamics. This paper examines the interrelationships among five Balkan emerging stock markets (Romania, Bulgaria, Serbia, Turkey and Croatia), the US and three developed European markets (UK, Germany, and Greece), during the period 2000–2009. Romania and Bulgaria have recently joined EU, while Turkey and Croatia remain EU accession candidates, and Serbia struggles to emerge from isolation and start negotiations for future EU enrolment. Following the existing literature, we initially employ a conventional empirical analysis to test the equity market integration hypothesis (Johansen and Gregory–Hansen residual-based cointegration tests and Monte Carlo simulation technique to test sensitivity of the cointegration estimation). However, to avoid the limitations of this analysis and provide more robust results, we also apply the AG-DCC model developed by Cappiello et al. (2006). We estimate time-varying asymmetric conditional correlations between each developed market and all other Balkan markets during stable and crisis periods in order to examine the impact that the 2007–2009 financial crisis had on the integration of Balkan emerging equity markets. This multivariate process allows for series-specific news impact and smoothing parameters, permits conditional asymmetries in correlation dynamics and accounts for heteroskedasticity directly by estimating correlation coefficients using standardized residuals. Moreover, this specification is well suited to investigate the presence of asymmetric responses in conditional variances and correlations during periods of negative shocks. Our empirical analysis provides three main findings. First, there is a time-varying cointegrating relationship between the Balkan emerging markets within the region and globally. Second, a regime shift appeared for all Balkan markets in year 2002, implying their increased exposure to the global environment. Third, dependence is heightened among the Balkan and the developed equity markets, supporting the herding behaviour during the 2008 stock market crash period. The analysis in the paper has implications for international portfolio diversification, the smooth E.U. accession of Balkan economies and their long-term growth prospects. Our analysis contributes to the literature in the following aspects. First, it applies a much wider battery of tests than other previous studies, trying to shed further light on the presence of long-run linkages between emerging stock markets and their mature counterparts. Second, to the best of our knowledge it employs the AG-DCC model that has not been used before to test the Balkan equity markets integration hypothesis using data for the 2007–2009 financial turmoil. Third it extends prior but very limited research on this topic, which report interrelationships and linkages between developed and Balkan stock markets using conventional cointegration tests and vector error correction models for a period until 2007 (Syriopoulos, 2011). The structure of the paper is organized as follows: Section 2 provides an overview of the Balkan economic and financial environment. Section 3 analyzes the methodological issues. Section 4 presents the data. The empirical results are reported in Section 5. The final section contains the concluding remarks.

This study investigates long-run relationships among five Balkan emerging stock markets, the US and three developed European markets (UK, Germany and Greece) during the period 2000–2009. Johansen and Gregory–Hansen cointegration tests and Monte Carlo simulation provide evidence in favor of equity market integration within the region and globally. Moreover, the correlation dynamics obtained by the AG-DCC GARCH model show that dependence is heightened among Balkan and developed equity markets, supporting the herding behaviour during the 2008 stock market crash period. Results indicate that both domestic and external factors affect the Balkan stock markets, shaping their long-run equilibrium. The pivotal influence of “foreign factors” on the Balkan emerging stock markets could be attributed to their growing exposure to foreign capital flows, the financial liberalization, the common regional economic prospects for full EU enrolment, the increased growth of foreign ownership and the trading behaviour of institutional investors in these markets during the turbulent period of 2008–2009. The presence of long-run relationships suggests that the Balkan emerging markets have become increasingly integrated with the world markets. This implies that international diversification benefits are quite limited in Balkan stock markets. Investors who diversify their portfolios across Balkan stock markets should expect rather short-run modest portfolios gains, given the volatile behaviour of portfolio returns to market shocks. Finally, the equity market integration in the Balkan region has significant impact on the domestic macroeconomic policies pursued, as emerging markets become less immunized to external shocks.