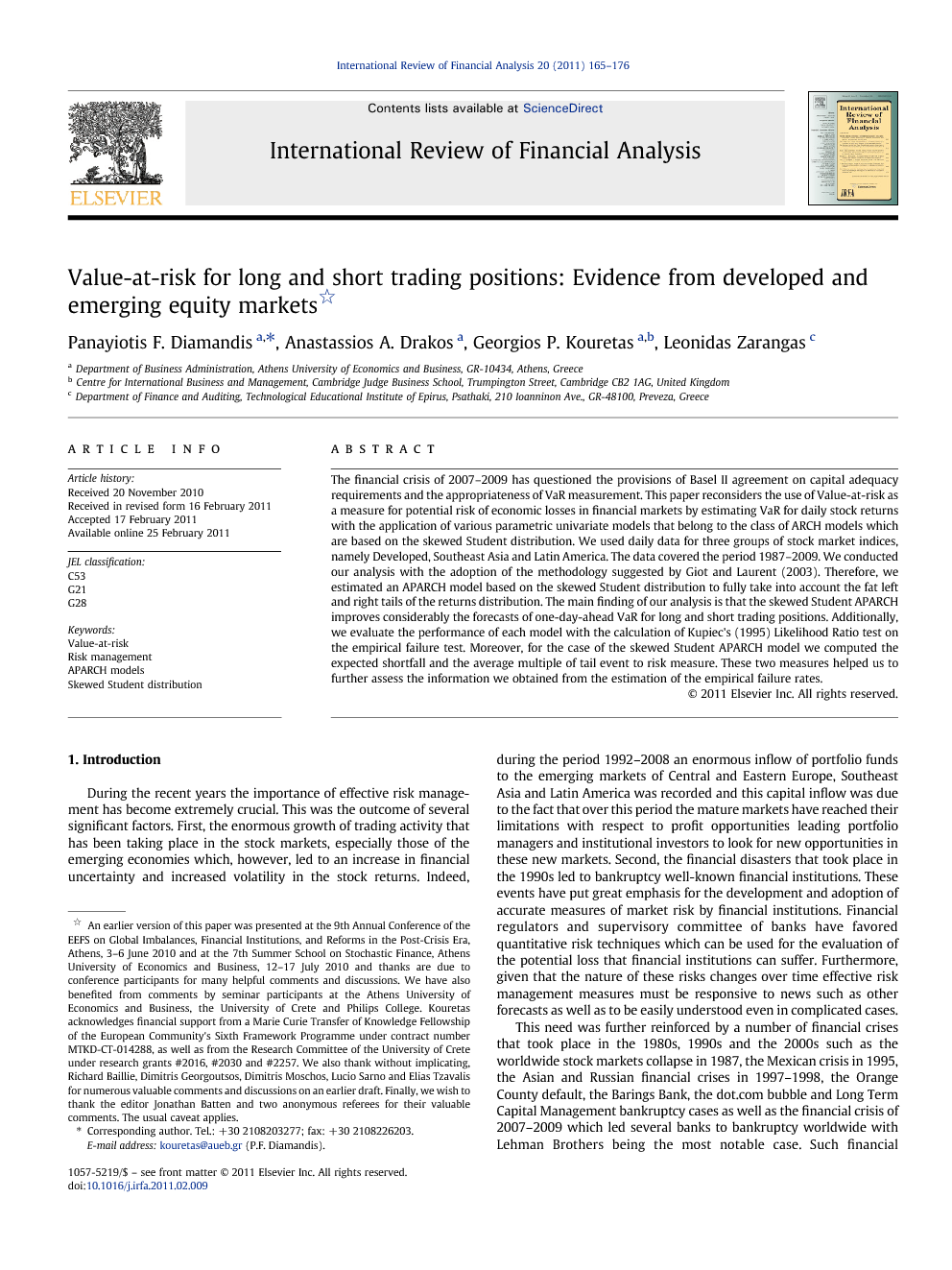 The financial crisis of 2007–2009 has questioned the provisions of Basel II agreement on capital adequacy requirements and the appropriateness of VaR measurement. This paper reconsiders the use of Value-at-risk as a measure for potential risk of economic losses in financial markets by estimating VaR for daily stock returns with the application of various parametric univariate models that belong to the class of ARCH models which are based on the skewed Student distribution. We used daily data for three groups of stock market indices, namely Developed, Southeast Asia and Latin America. The data covered the period 1987–2009. We conducted our analysis with the adoption of the methodology suggested by Giot and Laurent (2003). Therefore, we estimated an APARCH model based on the skewed Student distribution to fully take into account the fat left and right tails of the returns distribution. The main finding of our analysis is that the skewed Student APARCH improves considerably the forecasts of one-day-ahead VaR for long and short trading positions. Additionally, we evaluate the performance of each model with the calculation of Kupiec's (1995) Likelihood Ratio test on the empirical failure test. Moreover, for the case of the skewed Student APARCH model we computed the expected shortfall and the average multiple of tail event to risk measure. These two measures helped us to further assess the information we obtained from the estimation of the empirical failure rates.

During the last decade we have observed a substantial change in the way financial institutions evaluate risk. Faced with increased volatility of stock returns as well as with the heavy losses that banks and securities houses have experienced portfolio managers and supervising committees of financial markets have sought for a continuous improvement to potential measures of market risk. Value-at-risk is one of the major tools for measuring market risk on a daily basis and is recommended by the Basel Committee on Banking Supervision and this is documented in the Basel Accord Amendment of 1996. These models of risk management have become the standard tool for measuring internal risk management as well as for external regulatory purposes. However, most of the recent applications of evaluating VaRs for a wide range of markets have mostly applied for the case of negative returns, i.e. for the negative tail of the distribution of returns. The present paper dealt with modeling VaR for portfolios that includes both long and short positions. Therefore, we considered the modeling and calculation of VaR for portfolio managers who have taken either a long position (bought an asset) or a short position (sold an asset). This paper extends previous works on the forecasting performance of alternative VaR models. Specifically, we focused on the comparison of four alternative models for the estimation of one-step-ahead VaR for long and short trading positions. We have applied a battery of univariate tests on four parametric VaR models namely, RiskMetrics, normal APARCH, Student APARCH and skewed Student APARCH. We employed data that covered the recent financial crisis of 2007–2009 for twenty of stock markets which included both developed and emerging stock markets. Our purpose was twofold. First we seek to examine whether alternative VaR models provided different evidence for the case of developed as opposed to the emerging markets and second. We examined the performance of these models when periods of turbulence are included in the sample. Our overall results lead to the overwhelming conclusion that the skewed Student APARCH model outperforms all other specification modeling VaR for either long or short positions. These findings confirmed earlier evidence which show that models which include an asymmetric parameter perform substantially better than those with normal errors and this asymmetric feature is important in forecasting accuracy of the VaR models. The financial crisis of 2007–2009 has raised questions regarding the usefulness of the regulatory framework underlined by the Basle I and II agreements and it also questioned the appropriateness of the VaR as the measure to capture extreme cases like the ones the banking sector and global financial markets experienced over this turbulent period since several financial institutions went bankrupt under these extreme conditions. This has been argued as a failure of the micro-prudential regulatory approach Therefore, the recent proposals by the de Larosiere Group, 2009 and Turner, 2009 along with other researchers have made it clear that there is an urgent need for the development of a macro-prudential regulatory framework as the appropriate mean to provide stability and sustainability of the global financial markets and to minimize the risks from systemic crisis. Although the VaR will remain a useful tool its use maybe more cautious in the future.