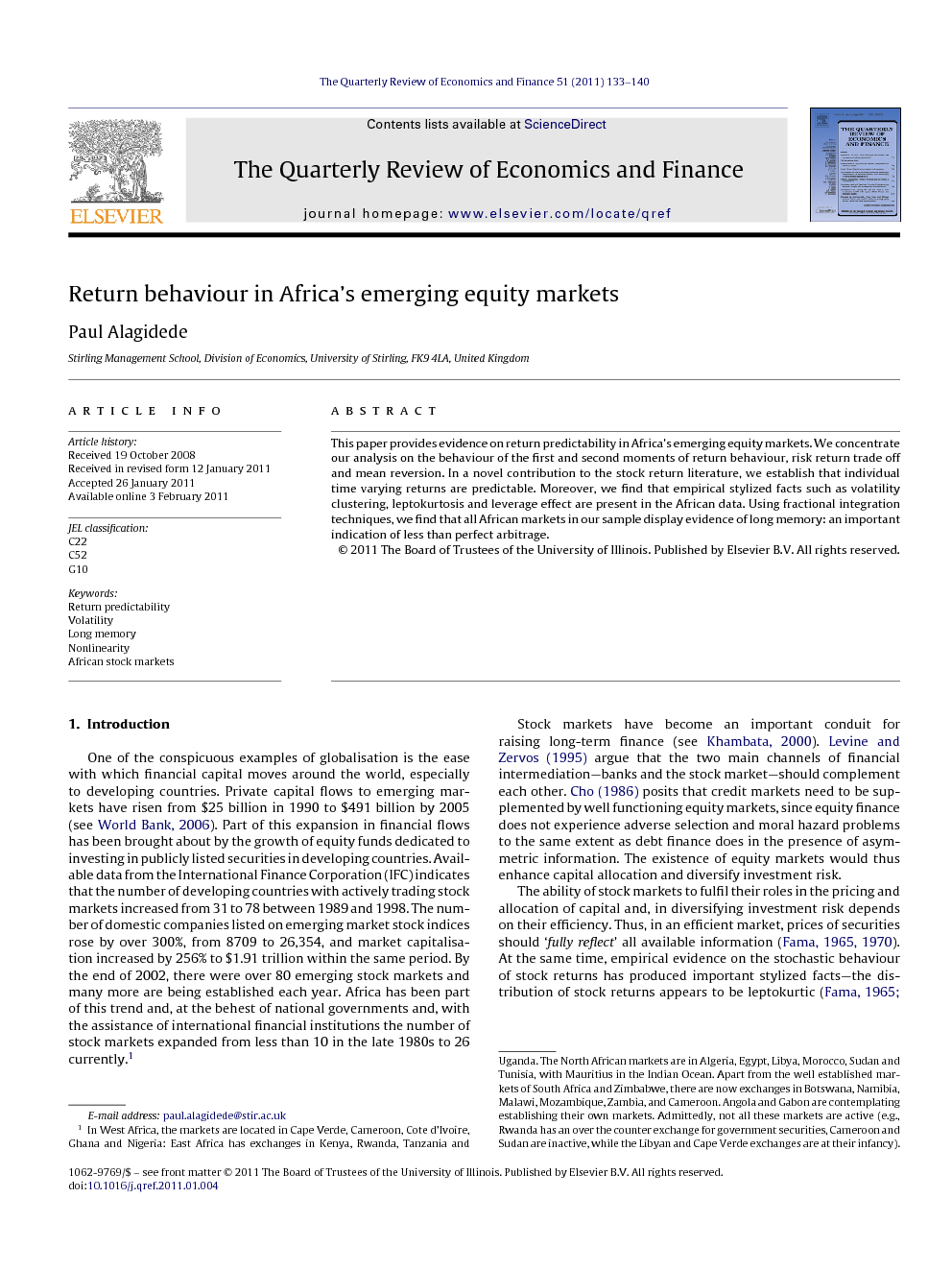 This paper provides evidence on return predictability in Africa's emerging equity markets. We concentrate our analysis on the behaviour of the first and second moments of return behaviour, risk return trade off and mean reversion. In a novel contribution to the stock return literature, we establish that individual time varying returns are predictable. Moreover, we find that empirical stylized facts such as volatility clustering, leptokurtosis and leverage effect are present in the African data. Using fractional integration techniques, we find that all African markets in our sample display evidence of long memory: an important indication of less than perfect arbitrage.

One of the conspicuous examples of globalisation is the ease with which financial capital moves around the world, especially to developing countries. Private capital flows to emerging markets have risen from $25 billion in 1990 to $491 billion by 2005 (see World Bank, 2006). Part of this expansion in financial flows has been brought about by the growth of equity funds dedicated to investing in publicly listed securities in developing countries. Available data from the International Finance Corporation (IFC) indicates that the number of developing countries with actively trading stock markets increased from 31 to 78 between 1989 and 1998. The number of domestic companies listed on emerging market stock indices rose by over 300%, from 8709 to 26,354, and market capitalisation increased by 256% to $1.91 trillion within the same period. By the end of 2002, there were over 80 emerging stock markets and many more are being established each year. Africa has been part of this trend and, at the behest of national governments and, with the assistance of international financial institutions the number of stock markets expanded from less than 10 in the late 1980s to 26 currently.1 Stock markets have become an important conduit for raising long-term finance (see Khambata, 2000). Levine and Zervos (1995) argue that the two main channels of financial intermediation—banks and the stock market—should complement each other. Cho (1986) posits that credit markets need to be supplemented by well functioning equity markets, since equity finance does not experience adverse selection and moral hazard problems to the same extent as debt finance does in the presence of asymmetric information. The existence of equity markets would thus enhance capital allocation and diversify investment risk. The ability of stock markets to fulfil their roles in the pricing and allocation of capital and, in diversifying investment risk depends on their efficiency. Thus, in an efficient market, prices of securities should ‘fully reflect’ all available information ( Fama, 1965 and Fama, 1970). At the same time, empirical evidence on the stochastic behaviour of stock returns has produced important stylized facts—the distribution of stock returns appears to be leptokurtic ( Fama, 1965, Mandelbrot, 1963 and Nelson, 1991). Further, short-term stock returns exhibit volatility clustering. These processes have been modelled successfully by ARCH-type models ( Bollerslev, 1986 and Engel, 1982). Moreover, changes in stock prices tend to be inversely related to changes in volatility ( Bekaert and Wu, 2000, Black, 1976 and Christie, 1982). Most of the empirical studies on these stylized facts have focused primarily on developed economies and the emerging markets in Asia and Latin America. Concerning African markets, there are only a few studies on the behaviour of stock returns (see Appiah-Kusi and Menyah, 2003, Mecagni and Sourial, 1999, Omran, 2007 and Smith and Jefferis, 2005). However, interest has been rekindled in African stock markets in recent times on account of their fast growth and relatively low correlation with the more developed markets. For instance, in 1994 African stock markets posted the biggest gains in U.S. dollar terms among all markets world-wide—Kenya (75%), Ghana (70%), Zimbabwe (30%), Egypt (67%). In 1995, African stock exchanges gained about 40% on their indices, with the value of stocks on the Nigerian stock market and Côte d’Ivoire's bourse registering over 100% increases in dollar terms.2 Average returns on African stocks in 2004 reached 44%. This compares favourably with a 30% return on the Morgan Stanley Capital International (MSCI) global index, 32% in Europe, 26% in the U.S. (Standard & Poor's), and 36% in Japan (Nikkei).3 Additionally, African stock markets provide benefits of portfolio diversification, as they tend to have zero, and sometimes negative, correlation with developed markets (see Harvey, 1995, for evidence on Nigeria and Zimbabwe). It thus becomes an important research endeavour to examine the evolution of stock returns in Africa's emerging stock markets, since this knowledge would be useful for regulators, academic research and professional fund managers. In particular, this paper contributes to the growing literature on stock return predictability in African markets by employing a battery of time series techniques to uncover the dynamics of the first and second moments of return behaviour. After controlling for nonlinearity, conditional heteroscedasticity and time varying risk premia, we find that individual time varying stock returns are predictable. Using fractional integration methods, we find evidence in favour of long memory: an important indication of less than perfect arbitraging. Our estimates of the risk-return trade off indicate that investors are appropriately compensated for assuming risk, while empirical stylized facts such as leverage effect and leptokurtosis are prevalent in African returns. Previous research such as Brooks, Davidson, and Faff (1997), Appiah-Kusi and Menyah (2003) identified the presence of GARCH effects in some of the markets that we analyse in this paper. The remainder of this paper proceeds as follows: the next section briefly examines the models employed. Section 3 describes the features of the data. We analyse and discuss the results in Section 4.

This paper examined the predictability of stock returns in Africa's largest markets—South Africa, Egypt, Nigeria, Kenya, Morocco and Tunisia. These markets account for over 90% of stock market capitalisation and domestic company listing in Africa. Their fast growth and impressive performance, coupled with their low correlation with the more developed markets make them agents for global risk reduction and potential investment avenues for investors seeking to diversify risk. However, evidence regarding the behaviour of returns is lacking. This paper fills an important gap by using various time series tools to uncover the dynamics of the first and second moment of return distribution. After controlling for nonlinearity, conditional heteroscedasticity and time varying risk premia, we find that individual time varying returns are predictable. Further, we find evidence of long memory, indicating that returns are not serially independent as required by the efficient market hypothesis in its weak form. In Tunisia and Kenya, we find that investors may be compensated for assuming risk, while empirical stylized facts such as leverage effect and leptokurtosis are prevalent in African stock returns.