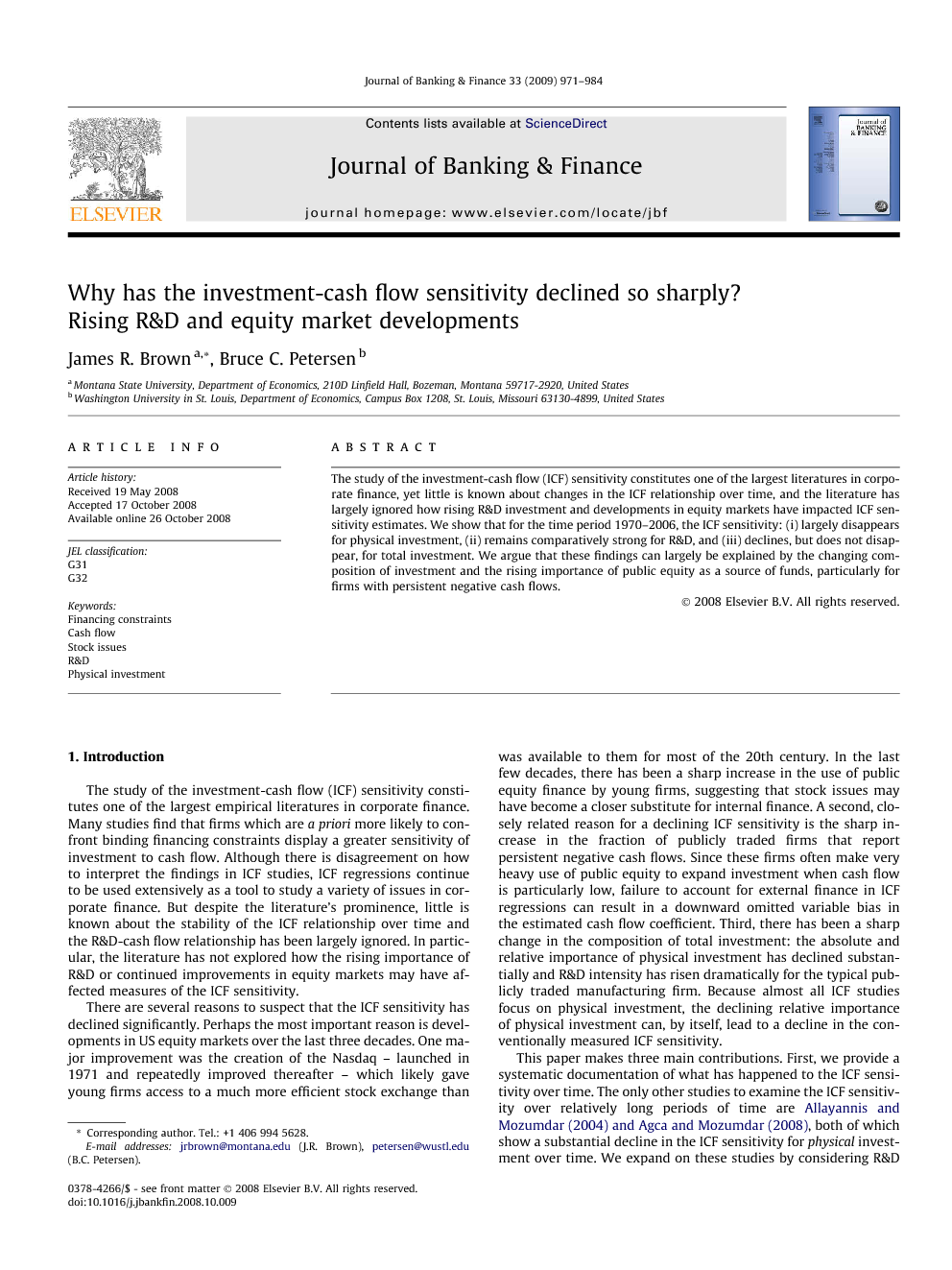 The study of the investment-cash flow (ICF) sensitivity constitutes one of the largest literatures in corporate finance, yet little is known about changes in the ICF relationship over time, and the literature has largely ignored how rising R&D investment and developments in equity markets have impacted ICF sensitivity estimates. We show that for the time period 1970–2006, the ICF sensitivity: (i) largely disappears for physical investment, (ii) remains comparatively strong for R&D, and (iii) declines, but does not disappear, for total investment. We argue that these findings can largely be explained by the changing composition of investment and the rising importance of public equity as a source of funds, particularly for firms with persistent negative cash flows.

We conclude with a summary of our main findings and a brief discussion of the main implications. We have shown that the ICF sensitivity for physical investment has fallen dramatically. Even after controlling for negative cash flow firms and the use of external finance (Table 4, Panel B), cash flow coefficients for physical investment have fallen by over 70% since the 1970–1981 period for both young and mature firms. A likely explanation for much of this decline is the sharp fall in the physical investment share of total investment, which we denoted earlier in the paper as βCAP. The summary statistics show that for positive cash flow young firms, median βCAP declined from 0.82 in 1970–1981 to 0.33 in 1994–2006, a decline of around 60%. Thus, based on Prediction 1, we would expect a very large fall in the physical investment sensitivity simply because physical investment has become a much smaller use of funds. Superficially, the R&D-cash flow sensitivity (Table 5) displays a very different pattern: Cash flow coefficients do not decline over time. But recall that the R&D share of total investment (βRD) rose dramatically over time. For example, for all young firms ( Table 1), the median value of βRD rose from 0.18 in 1970–1981 to 0.75, a four-fold increase. Based on Prediction 1, without improvements in capital markets, there should have been a very sharp rise in the R&D ICF sensitivity. As summarized below, a likely reason for the absence of a rise in the R&D ICF sensitivity is improvements in equity markets. Because of compositional issues, the clearest evidence of a decline in the ICF sensitivity can be found in the GMM regressions for total investment (Table 6). For all firms (Panel A), over the period of our study, cash flow coefficients fell 60% for young firms and 41% for mature firms. This decline is considerably smaller than for physical investment ( Table 4), consistent with Prediction 4. For positive cash flow firms ( Table 6, Panel B), cash flow coefficients declined by approximately 45% for young firms and 51% for mature firms. Among these positive cash flow firms, the cash flow coefficient for young firms is still substantial in the final period (0.240). Because of the changing composition of investment, future ICF studies should consider total investment, not just physical investment. Several findings in our study suggest that public equity markets improved substantially in recent decades and contributed to the decline in the ICF sensitivity. Most obviously, stock issues by young firms rose from near zero to very high levels in the final period. (In contrast, debt finance rises only modestly.) In addition, we have argued (Prediction 5) that R&D is likely the equity-dependent investment and young firms are the equity-dependent type of firm, and we in fact find strong stock effects primarily for R&D, and only for young firms. Furthermore, stock coefficients for young firm R&D rise from near zero in the early period to large and significant values in the final period, which we argue (Section 2.4.5) is consistent with improvements in equity markets. Finally, we point to the impact that the dramatic increase in R&D’s share of total investment (βRD) had on the R&D-cash flow sensitivity. Absent improvements in equity markets, this change in the composition of investment should have led to a sharp rise in the R&D-cash flow sensitivity. Our results indicate that this did not happen. Given the large size of stock issues and the large stock coefficients in the R&D regression, a likely explanation for the static R&D-cash flow sensitivity is that public equity finance became a much closer substitute for internal equity over this time period. The sharply declining total investment-cash flow sensitivity, together with the rising stock effects in total investment regressions, is also consistent with public equity becoming a better substitute for internal funds over the period we study. The above findings have implications for an important literature on the role of the stock market for corporate investment. Well-known studies such as Morck et al., 1990 and Blanchard et al., 1993 conclude that the stock market plays only a limited role in firm investment decisions, and may even be a “sideshow.” An important recent study by Baker et al. (2003), however, ranks firms according to “equity dependence” and finds that the total investment of equity-dependent firms over the period 1980–1999 is more sensitive to Tobin’s Q, supporting the existence of an “equity finance channel.” While our approach differs from their study – we focus on stock issues rather than stock prices – our findings support their conclusion concerning the importance of the equity finance channel. Our findings strongly indicate, however, that the equity finance channel is not uniform across types of investment: We find strong stock effects only for R&D. Furthermore, we do not detect substantial stock effects for R&D until the 1980s, suggesting that the stock market may have largely been a sideshow until the last few decades.