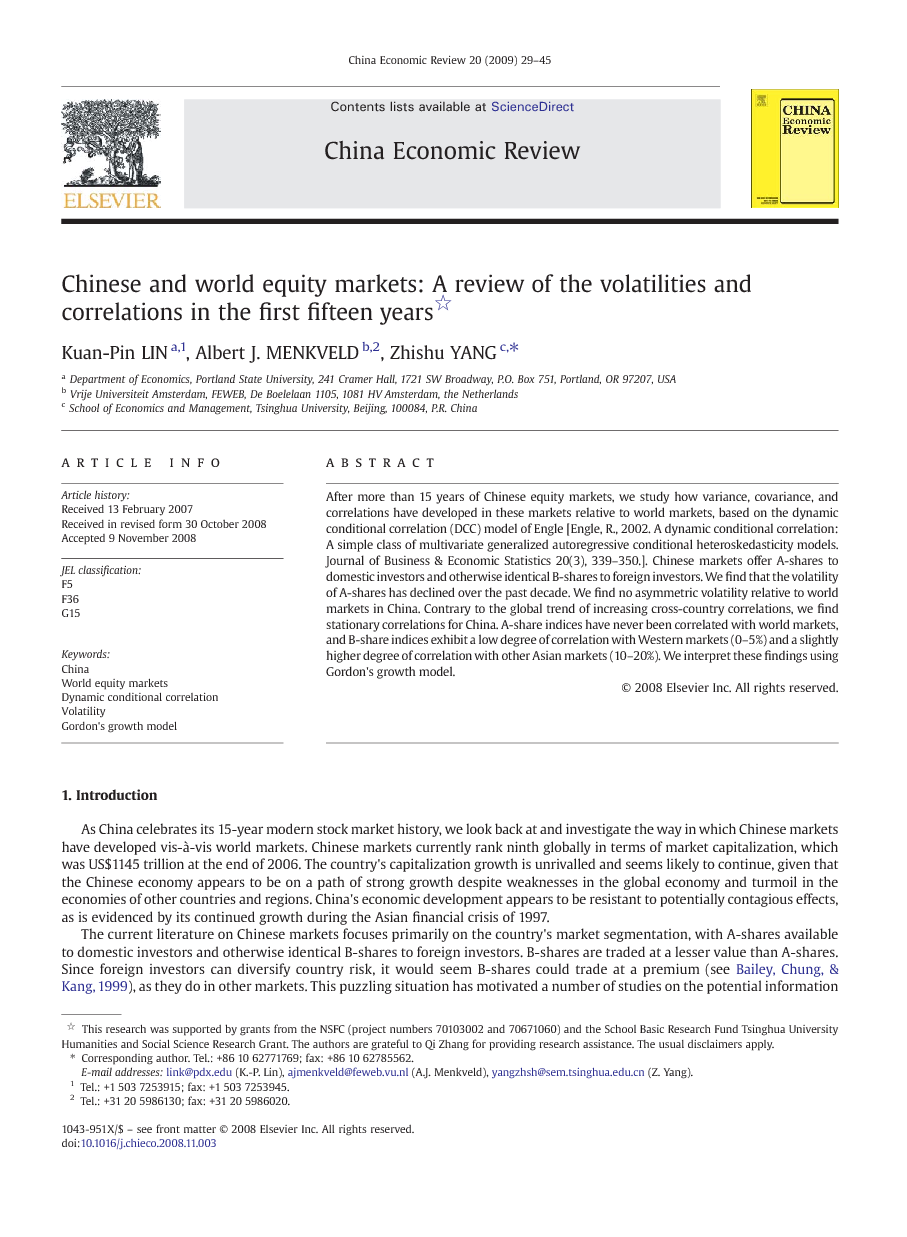 After more than 15 years of Chinese equity markets, we study how variance, covariance, and correlations have developed in these markets relative to world markets, based on the dynamic conditional correlation (DCC) model of Engle [Engle, R., 2002. A dynamic conditional correlation: A simple class of multivariate generalized autoregressive conditional heteroskedasticity models. Journal of Business & Economic Statistics 20(3), 339–350.]. Chinese markets offer A-shares to domestic investors and otherwise identical B-shares to foreign investors. We find that the volatility of A-shares has declined over the past decade. We find no asymmetric volatility relative to world markets in China. Contrary to the global trend of increasing cross-country correlations, we find stationary correlations for China. A-share indices have never been correlated with world markets, and B-share indices exhibit a low degree of correlation with Western markets (0–5%) and a slightly higher degree of correlation with other Asian markets (10–20%). We interpret these findings using Gordon's growth model.

In the sample period covering the 15-year history of Chinese markets up to December 2006, we investigate how variance, covariance, and correlation have developed for the country's four main indices—Shanghai-A, Shenzhen-A, Shanghai-B, and Shenzhen-B—and the world's main equity markets. To capture dynamic market correlations, we choose to estimate a version of the DCC model of Engle (2002). We allow for asymmetric effects, since changes may depend on whether the most recent return was positive or negative. Furthermore, by allowing asset-specific dynamics in volatility and correlation, a sequential QML method is used to estimate a large-sized DCC model. In the first estimation step, we identify and estimate appropriate univariate ARMA/GARCH models for weekly returns in each of the markets. Over time, A-share volatility has steadily decreased to levels that are comparable to those of other world markets. We interpret this as a sign that the market has matured. B-share volatility, however, shows no such trend. In the second estimation step, we standardize returns based on the volatility estimates and use these to estimate the dynamic process for the correlation matrix. Chinese correlations are equally persistent to those of world markets, but they are more erratic, appearing to be more dependent on the most recent events. We find that correlations across the two Chinese markets, the Shanghai and Shenzhen exchanges, have increased to 80–90%. Comparing the A and B-share markets within the two exchanges, we find the same upward trend, with correlations of around 50% at the end of 2006. These results are consistent with Gordon's growth model. Across the A- and B-share markets, only the dividend growth term contributes to the return correlations. Across the Shanghai and Shenzhen markets, the equity premium term also makes a contribution. The correlations of the B-share markets with world equity markets do not appear to exhibit any trend and are generally in the 0–20% range. We find this surprising for markets that are accessible to international investors, which should be more responsive to changes in investors' equity risk premium. The A-share markets also fail to show an upward trend—their correlations with other markets are close to zero and are insignificant. This is counterintuitive, as China's growing status in the world should make Chinese dividends more sensitive to the state of the world's economy. Finally, we find strong evidence that government policy plays an important role for changes in volatility and in correlations.