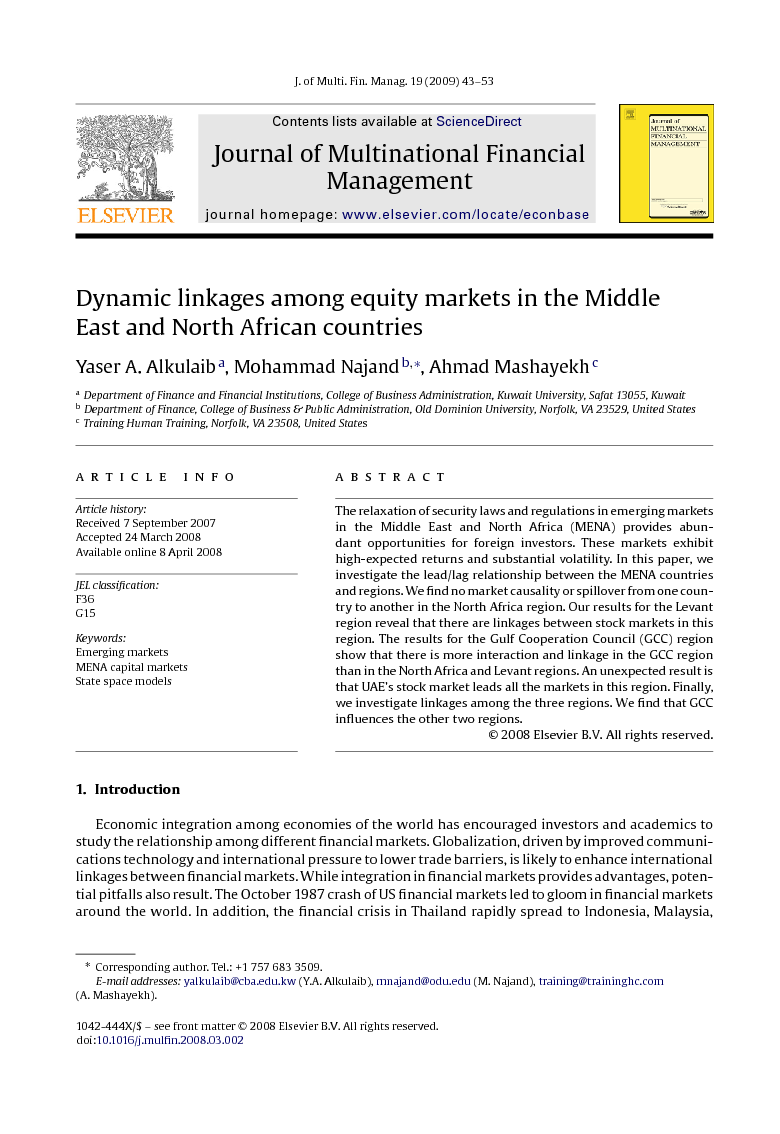 The relaxation of security laws and regulations in emerging markets in the Middle East and North Africa (MENA) provides abundant opportunities for foreign investors. These markets exhibit high-expected returns and substantial volatility. In this paper, we investigate the lead/lag relationship between the MENA countries and regions. We find no market causality or spillover from one country to another in the North Africa region. Our results for the Levant region reveal that there are linkages between stock markets in this region. The results for the Gulf Cooperation Council (GCC) region show that there is more interaction and linkage in the GCC region than in the North Africa and Levant regions. An unexpected result is that UAE's stock market leads all the markets in this region. Finally, we investigate linkages among the three regions. We find that GCC influences the other two regions.

Economic integration among economies of the world has encouraged investors and academics to study the relationship among different financial markets. Globalization, driven by improved communications technology and international pressure to lower trade barriers, is likely to enhance international linkages between financial markets. While integration in financial markets provides advantages, potential pitfalls also result. The October 1987 crash of US financial markets led to gloom in financial markets around the world. In addition, the financial crisis in Thailand rapidly spread to Indonesia, Malaysia, the Philippines, and Korea in 1997. In mid-1997, the East Asian crisis became a worldwide financial and economic crisis, hitting developing economies. Linkages among developed stock markets have been studied since the 1970s. Many researchers have investigated the short-term and long-term relationships among worldwide financial markets. The primary focus of the empirical research has been on relationships among the G-7 and other industrialized countries’ financial markets. Swanson (1987) suggests that world stock markets are becoming more integrated. For developed countries this might be true. However, only a few studies have examined the relationship between the emerging financial markets in the Middle East and North Africa (MENA) region. This paper focuses on the extent of integration among stock markets in developing countries. In recent years, new equity markets have emerged in Asia, Latin America, Europe, Africa and the Middle East. Some new markets that are open for foreign investors are located in the MENA, where many countries have recently been relaxing their security laws and regulations to attract foreign investors. The MENA countries have begun privatizing state-owned businesses and liberalizing laws regarding foreign ownership. The specific focus of this paper is to investigate the relationship between stock market returns for twelve different countries’ indices in the MENA region. The MENA countries have witnessed significant economic and financial development in the last decade, and despite the surge in empirical research, the MENA region, which is composed primarily of Arab League members, is barely investigated. In this study, we investigate the relationship between MENA market indices using daily returns for markets that have not been previously studied. The countries being studied are Bahrain, Egypt, Jordan, Kuwait, Lebanon, Morocco, Oman, Qatar, Saudi Arabia, Tunisia, Turkey and UAE. The results of this study should have important implications for investors and fund managers interested in international diversification. This paper is organized as follows. Section 2 contains a review of the relevant literature. Section 3 discusses the data, and Section 4 presents the methodology and empirical results. Finally, Section 5 contains conclusions and discussion.

In this paper, we investigate linkages and interaction within and among the three regions in our study. We find no causality or spillover from one country to another in the North Africa region. Our results for the Levant region reveal that there are linkages between stock markets in this region. We find that there is a bi-directional causality between Turkish and Lebanese stock markets, while Jordan's market is not influenced by either. The results for the GCC region show that there is more interaction and linkage in the GCC region than in the North Africa and Levant regions. The most surprising result is that UAE's stock market leads all the markets in this region. We attribute this to the tremendous growth of the UAE's equity market in recent years. UAE is taking bold steps to become the financial hub of the Middle East with its new regional stock market, the Dubai Regional Exchange. Finally, we investigate linkages among the three regions. We find that GCC influences the other two regions. We attribute the dominance of GCC region to its sheer size relative to the other two regions. Moving toward further liberalization of financial markets, MENA countries continue to adopt new laws and regulations to open their markets to global investors. This is more evident in the GCC region as market capitalization has exceeded one trillion dollars and constitutes about 20% of all emerging markets capitalizations. Investors in this region continue to benefit from high return and low volatility with minimal exposure to exchange rate risk. For global investors, the stock markets in the GCC region present an opportunity for further diversification as these markets exhibit low correlations with developed financial markets.