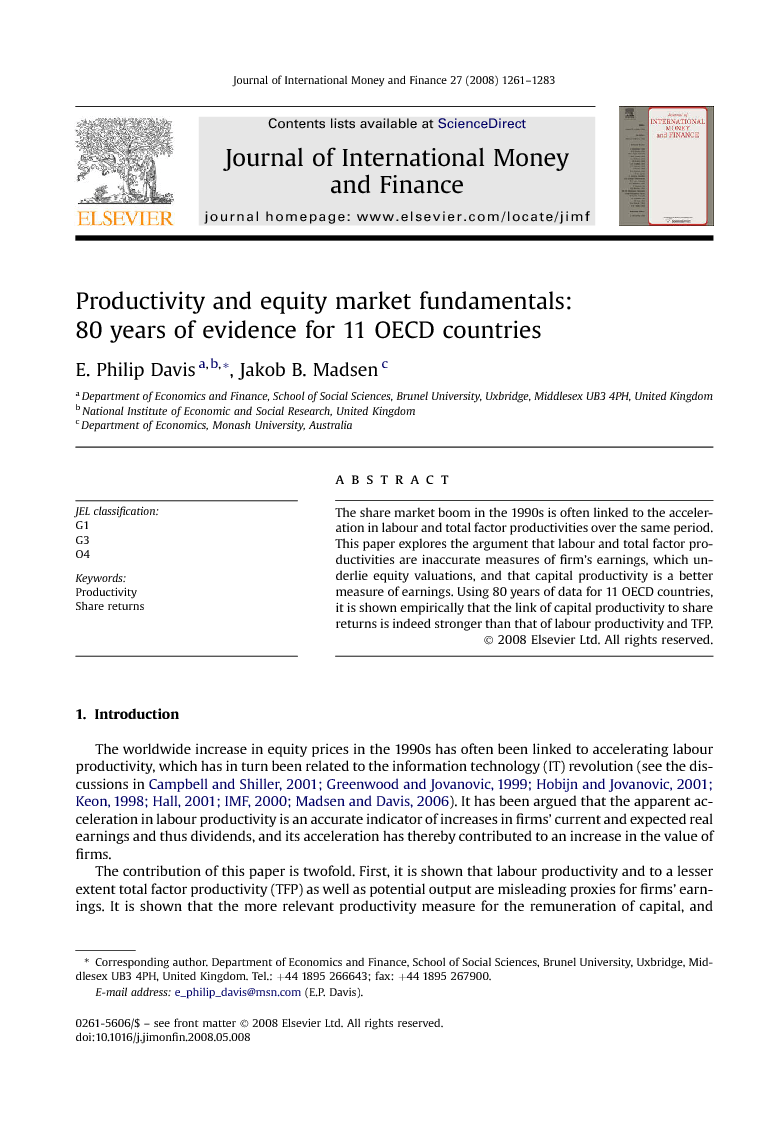 The worldwide increase in equity prices in the 1990s has often been linked to accelerating labour productivity, which has in turn been related to the information technology (IT) revolution (see the discussions in Campbell and Shiller, 2001, Greenwood and Jovanovic, 1999, Hobijn and Jovanovic, 2001, Keon, 1998, Hall, 2001, International Monetary Fund (IMF), 2000 and Madsen and Davis, 2006). It has been argued that the apparent acceleration in labour productivity is an accurate indicator of increases in firms' current and expected real earnings and thus dividends, and its acceleration has thereby contributed to an increase in the value of firms. The contribution of this paper is twofold. First, it is shown that labour productivity and to a lesser extent total factor productivity (TFP) as well as potential output are misleading proxies for firms' earnings. It is shown that the more relevant productivity measure for the remuneration of capital, and hence a key element for proxying firms' earnings, is the marginal productivity of capital, which under certain assumptions is equivalent to capital productivity at a macro-level. Second, the relationships between share returns and various productivity measures are empirically investigated using historical data on share returns and productivity over 80 years for 11 countries (G7, Australia, Netherlands, Sweden and Denmark). Short run and long run Granger causality tests are first used to examine the bivariate relationship between real share returns and various productivity growth measures. Thereafter, the nexus between real share returns and productivity is investigated using a vector-error-correction-mechanism (VECM), where other variables than productivity are allowed to influence share returns. Finally, panel data estimates using similar variables are presented to exploit the cross-country correlation between the error terms. All results underpin the case for using capital productivity as a measure for firms' earnings and hence as a predictor of equity returns. The paper is organised as follows. Section 2 establishes a model of firms and consumers to show that share prices are linked to the marginal productivity of capital, the bond yield and the equity risk premium. Section 3 shows why other macro-indicators of productivity, such as growth in labour productivity and to some extent also TFP, are misleading indicators of earnings. Empirical estimates are presented in Sections 4 and 5. They show that capital productivity is indeed the measure which is most closely linked to share returns.