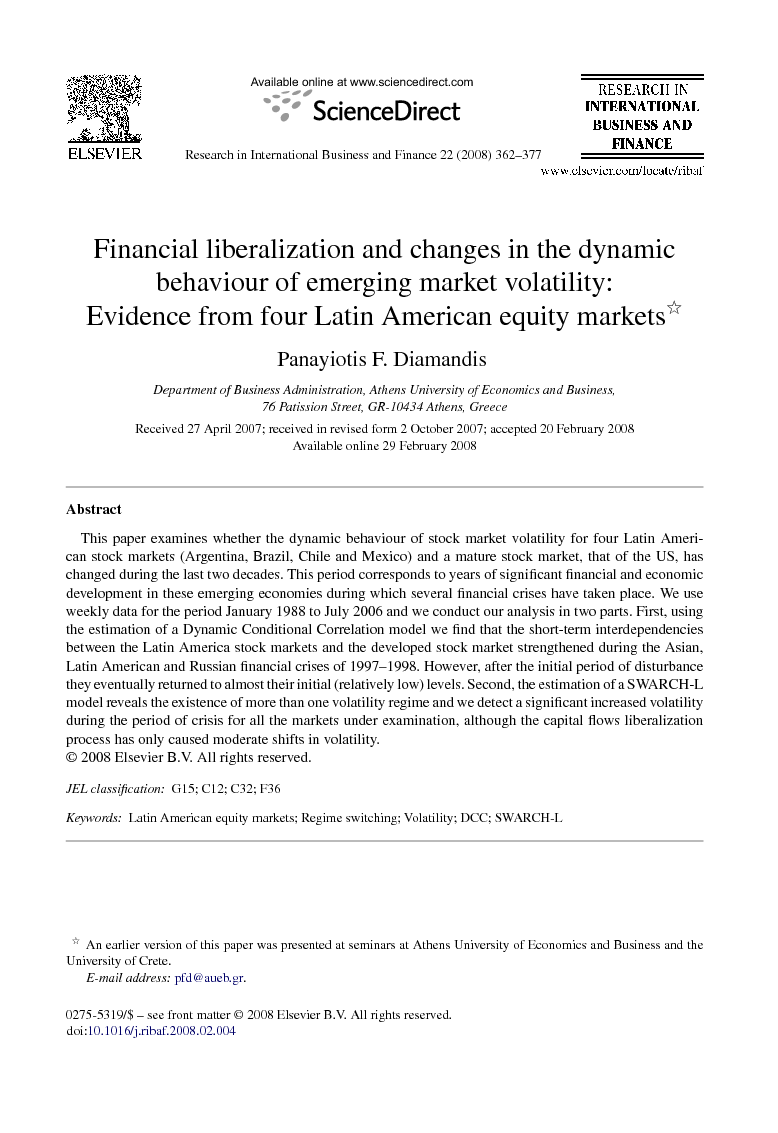 This paper examines whether the dynamic behaviour of stock market volatility for four Latin American stock markets (Argentina, Brazil, Chile and Mexico) and a mature stock market, that of the US, has changed during the last two decades. This period corresponds to years of significant financial and economic development in these emerging economies during which several financial crises have taken place. We use weekly data for the period January 1988 to July 2006 and we conduct our analysis in two parts. First, using the estimation of a Dynamic Conditional Correlation model we find that the short-term interdependencies between the Latin America stock markets and the developed stock market strengthened during the Asian, Latin American and Russian financial crises of 1997–1998. However, after the initial period of disturbance they eventually returned to almost their initial (relatively low) levels. Second, the estimation of a SWARCH-L model reveals the existence of more than one volatility regime and we detect a significant increased volatility during the period of crisis for all the markets under examination, although the capital flows liberalization process has only caused moderate shifts in volatility.

In the aftermath of the Asian and Russian financial crises of the 1990s, several authors have argued that the high degree of capital mobility has created significant instability in the international financial system. Therefore, it was suggested that the emerging economies should adopt policies to reduce capital mobility. The well-known Tobin tax was thus brought back into the relevant economic policy discussions as a potential mean of reducing world financial instability. In addition propositions in favour of implementing capital controls were once again heard. In this paper we use weekly data of stock returns of four emerging Latin American emerging markets (Argentina, Brazil, Chile and Mexico) as well as of the US market, in order to analyze the existence of short-term relationships between these markets as well as the behaviour of volatility through time. The first part of the analysis involves the estimation of conditional correlations among the five equity markets. To this end we implement the Dynamic Conditional Correlation specification proposed by Engle (2002) and Engle and Sheppard (2001). The second part involves an analysis for the existence of volatility regime switching by applying the Markov Switching ARCH-L model of Hamilton and Susmel (1994) to study for structural breaks in volatility of the examined markets during the examined period. The overall results of the DCC analysis suggest that the conditional correlation coefficients are relatively low for the majority of the bivariate cases. This finding has far reaching implications for portfolio diversification gains in terms of reduction of risk. Moreover, there is substantial evidence that the short-term interdependencies between the Latin American stock markets and the US stock market were affected mostly by crises in other emerging market regions, and particularly the Russian crisis that appeared to have the greatest impact on the conditional correlations. Furthermore, the conditional correlations, apart from the case of Argentina-US, rose dramatically through the period of the recent financial crises and remained at a significantly higher level until the end of the examined period. These results are in line with Forbes and Rigobon (2002) who argue that the increased correlations over crises periods are due to an increase in volatility in world markets because of a financial crisis. Furthermore, we found evidence that there were volatility switching regimes in the Latin American stock markets during the 1990s and early 2000s. The estimation of the appropriate univariate three-state SWARCH models revealed that there were episodes of high volatility for all four markets, especially around the events of financial crises. However, the analysis also made clear that these high volatility regimes were short-lived.