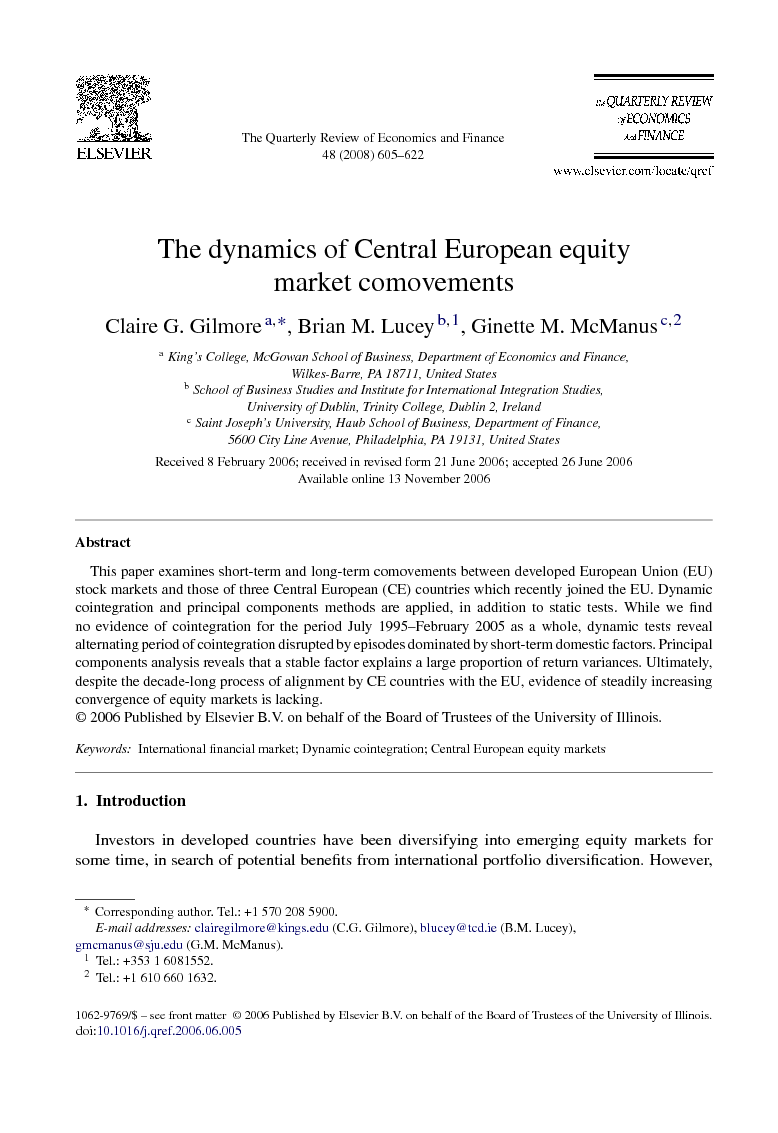 This paper examines short-term and long-term comovements between developed European Union (EU) stock markets and those of three Central European (CE) countries which recently joined the EU. Dynamic cointegration and principal components methods are applied, in addition to static tests. While we find no evidence of cointegration for the period July 1995–February 2005 as a whole, dynamic tests reveal alternating period of cointegration disrupted by episodes dominated by short-term domestic factors. Principal components analysis reveals that a stable factor explains a large proportion of return variances. Ultimately, despite the decade-long process of alignment by CE countries with the EU, evidence of steadily increasing convergence of equity markets is lacking.

In this paper we examined the comovements between CE and developed EU markets using both static and dynamic methods of analysis. The static analyses for the period July 1995 to February 2005 as a whole indicate relatively low levels of short-term correlations as well as a lack of statistically significant cointegration. Dynamic analyses using a rolling-window approach yield a more complex portrait of unstable short-run correlations and intermittent long-run cointegration. A dynamic principal component analysis shows nevertheless a single stable factor capable of explaining a large proportion of the behavior of the five markets as a group. Overall, there is little evidence of a fairly steady progress toward a long-term equilibrium relationship of the CE equity markets with those of the UK and Germany. This is somewhat surprising, considering the strong trade links with EU countries, Germany in particular, and the decade-long process of alignment of CE economies, political and financial institutions with the EU. Rather, the changing interactions of these markets point to intermittent periods of (statistically significant) cointegration with episodes during which short-run dynamics of the various markets, such as different economic growth rates or periods of instability, emerge to dominate the long-run relationship. This leads us to conclude that the process of EU accession has not changed the comovements between the CE equity markets in ways that would materially reduce diversification benefits for dollar-based investors.