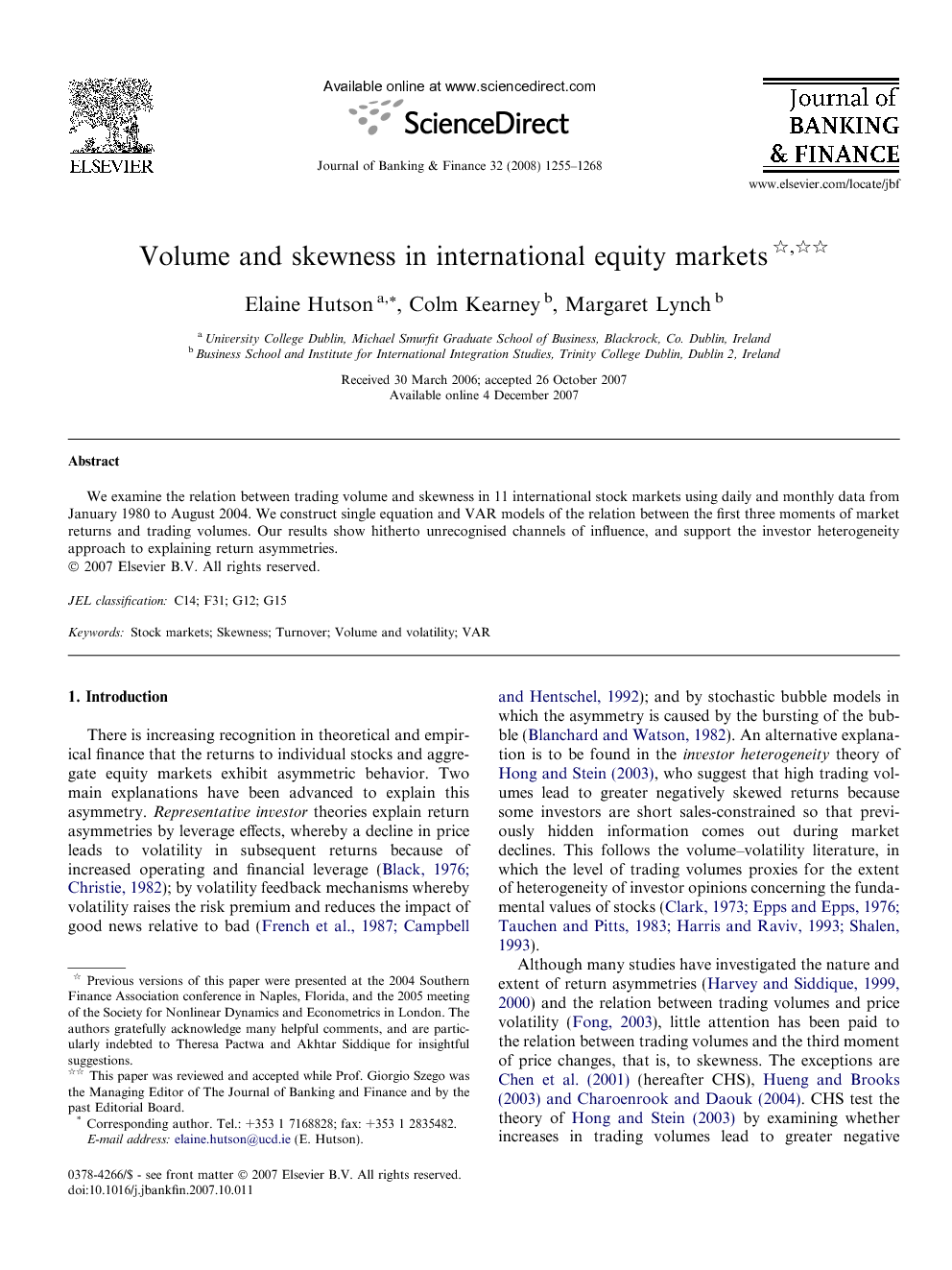 We examine the relation between trading volume and skewness in 11 international stock markets using daily and monthly data from January 1980 to August 2004. We construct single equation and VAR models of the relation between the first three moments of market returns and trading volumes. Our results show hitherto unrecognised channels of influence, and support the investor heterogeneity approach to explaining return asymmetries.

Our purpose in this paper has been to provide new evidence on the extent to which investor heterogeneity theory explains the relation between trading volumes and the skewness of equity returns at the market-level. Our motivation for this work stems from prior research by CHS who tested the prediction of Hong and Stein (2003) that higher trading volumes should lead to greater future negative return skewness. Using United States data, CHS confirmed this relation at the level of the firm but not for the overall market. Subsequent work by Hueng and Brooks, 2003, Charoenrook and Daouk, 2004 and Hueng and McDonald, 2005 tends to confirm the investor heterogeneity explanation of the volume–skewness relation at the firm-level, but not at the level of the market. Using daily data for 11 international stock market indexes for which daily trading volumes and market return data are available over the period from January 1980 to August 2004, we constructed up to 286 monthly unconditional estimates of the first three moments of trading volumes and market returns. We began our analysis by confirming that, consistent with the investor heterogeneity explanation of the volume- volatility literature, the level of trading volumes is positively correlated with the absolute change in market prices in all 11 markets. We also confirmed our inference from Chordia et al. (2001) that the levels of trading volumes and their volatilities are positively correlated in all 11 markets in our sample. We then presented a series of single equation, panel and VAR estimates that generalise previous specifications by including these features of our data along with a wider set of variables, a wider set of interactions between them, and a richer set of adjustment dynamics to explain how market return skewness evolves over time in response to variations in trading volumes. In the single equation analysis, our replication of CHS and Charoenrook and Daouk (2004) for each of our 11 markets confirmed that, using their specifications, there is little evidence that higher trading volumes are associated with greater subsequent negative skewness. When we estimated our more general single equation model, however, we found that lagged trading volumes influence future return skewness in 8 of our 11 markets. This includes the United States, for which we found that all three moments of trading volumes affect market return skewness. We thus provide stronger evidence that trading volumes are associated with future negative skewness than is reported by CHS, Charoenrook and Daouk, 2004 and Hueng and McDonald, 2005. When we estimated our generalised model on all markets in a panel regression, we found that the first and third moments of trading volumes are significant determinants of subsequent market return skewness. Finally, our VAR modelling for each market yielded three main results. First, there are substantial hitherto unrecognised interactions between all three moments of trading volumes, and these interactions play an important role in driving the volume–skewness relation. Second, we find strong evidence of the volume–volatility relation that is consistent with investor heterogeneity theory and is encompassed within our model. Third, we find significant evidence of the volume–skewness relation – that higher trading volumes trigger subsequent greater negative market return skewness. Overall, our market-level findings are consistent with the firm-level analysis of CHS that supports the investor heterogeneity explanation of return asymmetry.