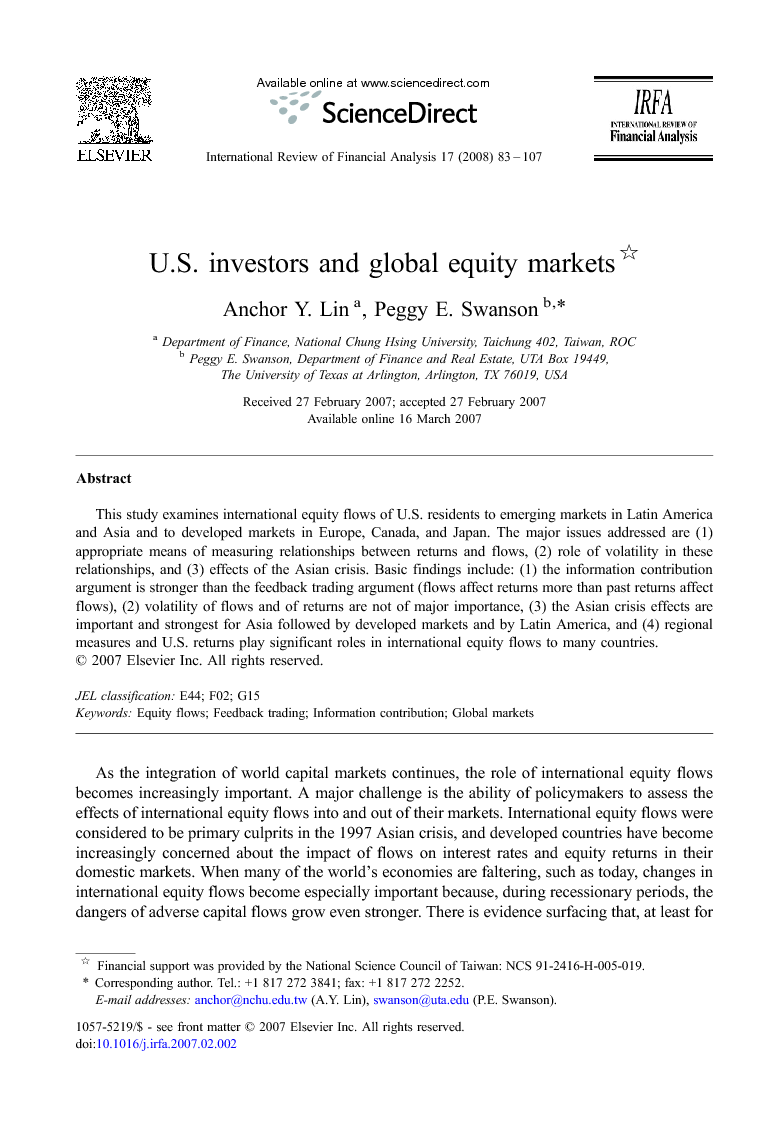 This study examines international equity flows of U.S. residents to emerging markets in Latin America and Asia and to developed markets in Europe, Canada, and Japan. The major issues addressed are (1) appropriate means of measuring relationships between returns and flows, (2) role of volatility in these relationships, and (3) effects of the Asian crisis. Basic findings include: (1) the information contribution argument is stronger than the feedback trading argument (flows affect returns more than past returns affect flows), (2) volatility of flows and of returns are not of major importance, (3) the Asian crisis effects are important and strongest for Asia followed by developed markets and by Latin America, and (4) regional measures and U.S. returns play significant roles in international equity flows to many countries.

A general consensus in the literature appears to be that international capital flows were important contributors to financial market instability in emerging countries during the 1990s. This study investigates the relationships between U.S. equity investment in foreign countries and equity returns in those countries for emerging Latin American markets, emerging Asian markets, and developed markets which include countries in Europe plus Canada and Japan. After analyzing the results from two basic models of the relationships–feedback trading and information contribution–effects of volatility and of the 1997 Asian financial market crisis on these relationships are studied. Three types of returns are included: local market returns computed from individual country indexes which has been a standard returns measure for international equity flows, U.S. market returns as a primary alternative to foreign investments for U.S. investors, and regional returns to capture the effects of investment decisions being made on a regional basis before individual countries are selected. All flows are scaled flows, flows which have been adjusted for market capitalization. The countries included from Latin America are Argentina, Brazil, Chile, and Mexico; from Asia are Hong Kong, Korea, Malaysia, Philippines, Singapore, Taiwan, and Thailand; and from Europe are France, Germany, Italy, Netherlands, Switzerland, and the U.K. The time period covered is January 1989 through April 2002. Throughout the tests, the information contribution hypothesis performs better than the feedback trading hypothesis for the emerging markets, both Latin American and Asian. However, the feedback trading model is better for Europe in the basic model and in the model including volatility effects but not in the model including crisis effects. Adding the impacts of the crisis appreciably sharpens the results for all three regions. Based on the initial equations, Latin America reflects minimal importance of returns under feedback trading but strong importance of flows under information contribution. For Asia, the two models yield almost identical results. In Europe, feedback trading results are somewhat stronger than information contribution results but less than one-half of the coefficients are significant. Feedback trading reveals virtually no relationships for regional measures. U.S. returns are generally as important as local returns in determining flows for all areas and even more important than local returns for Europe. Volatility effects are stronger under the feedback trading hypothesis than the information contribution hypothesis, although less than one-half of the countries in any region is significantly affected by any volatility measure included. For feedback trading, volatility is more important in the cross regional measures. Own regional volatility is important for Latin America and Europe, and U.S. return volatility is important for Asia and Europe. However, no effects result from volatility in other regions. Even fewer volatility effects are identified for information contribution but again strongest results are shown for cross-regional measures where all three regions are affected by flow volatility in the other regions. Including Asian crisis effects yield the strongest results in the study and the improvement of the information contribution premise over the feedback trading argument is even greater. Adding the crisis period dummy variables does not appreciably affect the significance levels of return (flow) effects on flows (returns). However, the crisis period caused significant changes in the relationships for half the Latin American countries, all but one of the Asian countries, and most of the European countries. The importance of the crisis effects on the flow/return relationships carries implications for policy makers. This is especially important since the flow effects on returns are found to be short term. If flows chase high returns, the price pressure theory, and these flows do not represent fundamentals, emerging markets may elect to restrict foreign equity flows because of the chance for a fast reversal of direction. These results, plus the strong effects from volatility of both flows and returns from other regions, suggest the use of capital flow restrictions and close monitoring of equity market behavior. However, the evidence of internal (local) as opposed to external (U.S.) influences indicates that international equity flows did not impact local markets during the crisis period as strongly as has been previously asserted. The findings highlight the importance of contagion or regional effects, and the literature needs to be expanded to integrate both contagion and international equity flow effects. Use of global international equity flows rather than U.S. flows alone will provide better information once consistent and reliable data become available. Another needed extension, also limited by data availability at this time, is a comparison of investment performance of domestic versus foreign residents. Domestic market participants affect returns and isolating their impact would allow better insight into international investors' effects on local markets.